Corona: I own just 5 of 45 properties 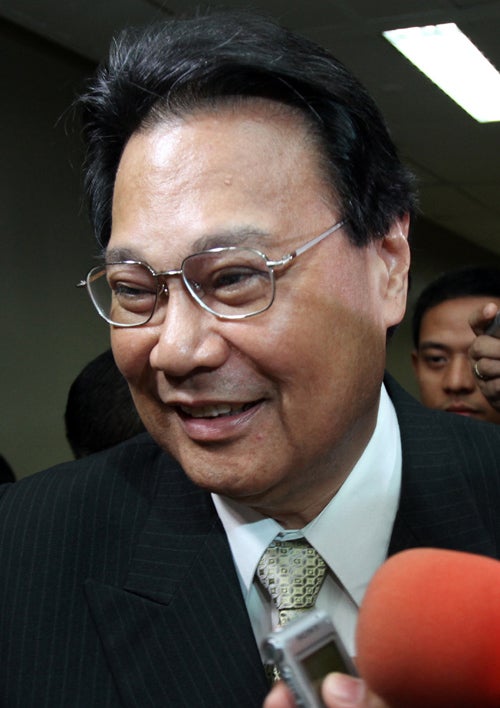 Chief Justice Renato Corona on Monday acknowledged that he and his family owned five of the 45 properties that prosecutors from the House of Representatives had linked to the family.

Corona said the other properties were either owned by his in-laws, his in-laws’ dead parents, his broker, people he did not know, and even by the National Housing Authority, but were included in the list to “make it appear” that these were his.

Speaking before an enthusiastic crowd of supporters gathered at the Supreme Court building in Manila, the Chief Justice also lashed out at three powerful persons he did not name for supposedly conspiring to oust him.

“There’s no turning back. This fight has become bigger than me and my family. Our enemies are truly powerful and influential. They are using different government agencies to oppress us,” Corona said in a 27-minute speech.

“All of their accusations are fiction, maybe to hide their deficiencies. They do not respect the senators of the impeachment court. They violated many laws. In their intent to make me resign, they did nothing but to try to scare me,” he said.

He said he expected the Senate, sitting as an impeachment court, to acquit him.

“They say I am a hindrance. True! I am a big hindrance for those who want to stop the distribution of land to the farmers of Hacienda Luisita,” Corona said, eliciting applause from the crowd.

“Those three are conspiring to oust me from my post. And most of all, I am a big hindrance to the establishment of a dictatorship,” he added.

Corona said that when the controversy over his doctorate in civil law from the University of Sto. Tomas fizzled, his detractors came out with a “fake” list from the Land Registration Authority (LRA) of 45 properties that he or his family supposedly owned.

The House prosecution team claims that the total cost of at least 19 of the 45 properties, reported to be worth P200 million, was grossly disproportionate to the combined income of the Corona couple and their children.

“What they did here is a big lie. Let us go over these one by one to prove that most of these are not mine. I (own) only five. They are inventing and lying to force me to resign as Chief Justice,” Corona said.

The Chief Justice said at least three of these properties were reported in his statement of assets, liabilities and net worth (SALN). But while discussing the properties one by one, he did not mention the location of most of the assets.

Corona acknowledged that that the first property (with Condominium Certificate of Title [CCT] No. 85716) divulged to the media was his.

“This is mine and this was included in my SALN. This is such a small property for them to be interested in. This is just 48 square meters. Nakakahiya nga pong aminin sa inyo (I am ashamed to admit this before you),” he said.

However, the property with CCT 87516 referred to a unit at the posh The Columns condominium strategically located at the corner of Ayala and Buendia Avenues in the Makati City business district. It is estimated to be worth P6 million.

Corona said a property that covered 1,750 sq m in Marikina City was inherited by his wife from her parents but this had already been sold to one Demetrio Vicente in 1988.

“That was written at the back of the title. It’s impossible that the LRA did not know that,” Corona said.

The Chief Justice said a property with Transfer Certificate of Title (TCT) No. 58543 was in the name of one Castillo, Rosenda. “I don’t know this person,” he said.

Corona said the property with CCT 5582—the Spanish Bay Tower in Bonifacio Ridge—was a “fruit of our labors.” The 113-sq-m property has an estimated market value of P10 million.

“But they also included the title of our developer,” Corona said.

He said another condominium was included in his SALN but he faulted his critics for including its parking lots. Corona was referring to a 303-sq-m penthouse in the Bellagio Tower, which has an estimated market value of P30 million, in Bonifacio Global City in Taguig City.

“Why did they do that? Because they wanted to make the list longer to give the false impression that we have so many properties,” Corona said.

Son PT in US

The Chief Justice said the properties listed as Nos. 21 and 22 were one and the same—a 200-sq-m property—and was owned by his youngest son, “who is a successful physical therapist in the US.”

He said the properties listed as Nos. 23 and 24 were also one and the same and that it was owned not just by his wife but also by her seven other siblings who inherited it from their parents.

“But they’re trying to make it appear that it is only I and my wife who own this. The title of my in-law was even included (in the list) to make it longer,” Corona said.

“My son-in-law is a very successful doctor at Asian Hospital and Medical City so he can afford to buy that,” Corona said.

“(The property listed as No. 23) is in the name of the National Housing Authority but even that was linked to me,” he added.

He said another property belonged to one Ismael Mathay Jr. but this was also included in the list.

Corona also denied having done anything wrong in the supposed anomaly in a World Bank project to reform the judiciary.

The World Bank has uncovered questionable procurements and disbursements in the tribunal in connection with the Judicial Reform Support Project, which the bank partly funded with $21.9 million, or about P931 million.

“I don’t want to put myself and my family in danger but I can no longer do anything so I am putting at stake everything in this fight—my family, my name, my person, and my honor and dignity,” he said.

“This is what they call the straight path and that is also what is destroying our democratic institutions,” he added.