Vatican: Climate change efforts go forward even without US 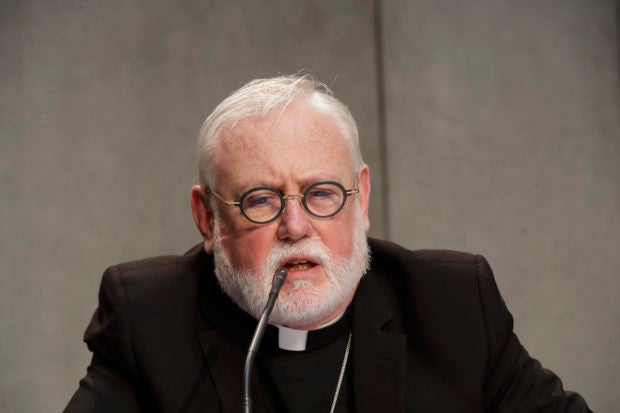 Monsignor Paul Richard Gallagher speaks during a press conference to present a document on the 5th anniversary of Pope Francis’ encyclical “Laudato si” (Praise Be) calling on the world to act to stop the human destruction of the planet, at the Vatican’s press room, Thursday, June 18, 2020. The worldwide COVID-19 outbreak struck as various Vatican departments were well into drafting a document calling the faithful to carry out concrete local actions to mark the fifth anniversary of Francis’ encyclical that denounced the environment’s exploitation and strongly recommended caring for the Earth. (AP Photo/Alessandra Tarantino)

VATICAN CITY — The Vatican stressed Thursday that the movement to combat climate change is unstoppable and worldwide, although it said it would welcome a U.S. return to the Paris agreement.

The Holy See’s foreign minister, Monsignor Paul Gallagher, at a news conference marking five years since Pope Francis’ encyclical “Laudato Si'” decrying human damage to the environment, insisted that “humanity will not be blown off course” by any one player’s decision.

In 2019, U.S. President Donald Trump’s administration formally began the process to exit the climate deal, in which nearly 200 nations pledged to reduce greenhouse gas emissions and assist poor nations struggling with the consequences of a warming Earth.

“We do believe that U.S. engagement in many fields is vital to the future of the world’s environment,” Gallagher said in response to a question about the U.S. pullout.

Still, as efforts on climate change go, “it’s an irresistible world movement, a social movement, a movement of faith,” and so “humanity will not be blown off course by any decision” to withdraw from the accords, he said.

Gallagher added: “But obviously we welcome anybody coming back to the table.”

The current pandemic has shown how problems such as climate change “don’t respect borders,” Gallagher said. The COVID-19 outbreak, devastating in many places in the world, “has highlighted the many, many areas in which we have a lot of work to do.”

He cited social justice issues “across the board,” including for indigenous peoples.

“The church will be encouraging states and governments and the church itself to work on these issues,” said Gallagher, one of the Holy See’s top officials.

In the encyclical and in many public speeches, Francis has repeatedly noted that the poor suffer greatly due to climate change and pollution.

In a 227-page document issued on Thursday to mark the five years since the encyclical’s publication, the Vatican said the pope’s impassioned appeal to protect nature is increasingly urgent as the global pandemic alters lifestyles and makes painfully plain the fragility of life.

The worldwide COVID-19 outbreak struck as various Vatican departments were well into drafting a document calling on the faithful to carry out concrete local actions to mark the fifth anniversary of the encyclical that denounced the environment’s exploitation and strongly recommended caring for the Earth.

In the anniversary document, the Vatican said the pandemic also laid bare the need to rethink political policies that have been aimed at reducing welfare programs. It didn’t identify specific countries.

The document says that, provoked by the pandemic, “the health emergency, the solitude, the isolation to combat contagion, have put us suddenly face-to-face with our fragility as finite creatures.”

Essentially, the document takes stock of how Catholics worldwide have responded to the pope’s encyclical. The Vatican cites examples of concrete projects and grass-roots initiatives taken in recent years by local churches, charities, or parishes to prevent environmental damage or save natural resources. Among them is a charity’s project in Mongolia to reduce carbon dioxide emissions and another to help small-scale farmers in India reduce the use of polluting pesticides.

Tiny Vatican City State’s own measures are held up by way of encouragement, including recycling water flowing through monumental fountains and having Holy See employees bring their own mugs or cups to use in the Vatican cafeteria instead of throwaway plastic drink containers.

Vatican officials pointed out on Thursday that solar panels have been installed at the Holy See’s astronomical observatory in Arizona, in the United States.