SWS survey: 83% of Filipinos report decline in quality of life 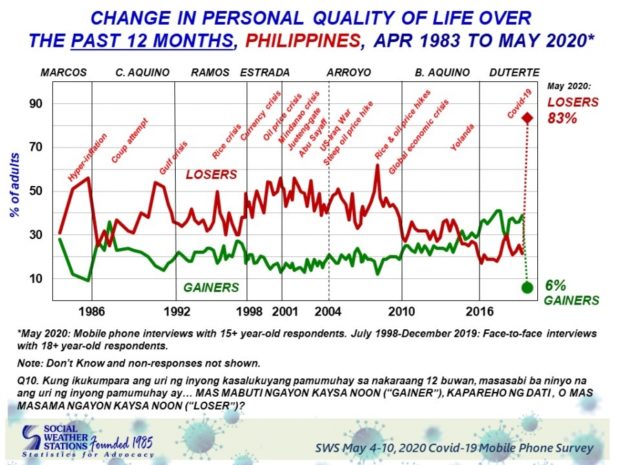 An SWS survey conducted in May 2020 showed the “worst trend in survey history,”  after 83 percent of respondents said their quality of life has worsened  in the last 12 months. (Image from SWS)

MANILA, Philippines — Eighty-three percent of Filipinos believe that their quality of life has worsened in the last 12 months—the “worst trend in survey history,” a Social Weather Stations  survey conducted in May showed.

The SWS survey released on Thursday showed that 10 percent of respondents believe they had the same quality of life (unchanged), while six percent said it got better (gainers).

The 83 percent proportion of “losers,” or the term used by the SWS for those who reported a worse quality of life, in May 2020 is a new peak in the 37-year series of 135 SWS surveys, breaking the previous record of 62 percent “losers” in June 2008.

SWS said the six percent of “gainers” is a new all-time low, breaking the previous record of nine percent “gainers” in July 1985.

Net gainers have been negative very often in survey history, according to SWS. From 1983 onwards, only 16 percent of the 135 readings were positive, while 84 percent were zero or negative.

“The negative May 2020 score, however, is a break from the positive trend of the past 5 years. Of the 20 observations between March 2015 and December 2019, 19 were positive. Notably, this already accounts for 90% of all positive scores recorded by SWS.”

The nationwide net gainers score of –78 is the result of very low (–30 and below) scores in all areas. The lowest score was recorded in Visayas at –82, followed by Mindanao at –80, Metro Manila at –77, and Balance Luzon at –75.

SWS noted that scores in all areas dropped to all-time low figures when compared to previous SWS surveys of adults.

The survey was conducted from May 4 to 10 using mobile phones and computer-assisted telephone interviews with 4,010 working-age Filipinos nationwide or those aged 15 years old and above.

Two hundred ninety four of the respondents are from Metro Manila, 1,645 from Balance Luzon, 792 from the Visayas, and 1,279 from Mindanao.

Quarantine / lockdown measures due to the coronavirus disease 2019 (COVID-19) pandemic were imposed in the country since March, affecting numerous industries and displacing millions of workers nationwide.

The ECQ and GCQ area classification in the SWS report is based on Executive Order 112, which placed the following areas under ECQ up to May 15: Metro Manila,Central Luzon (except Aurora Province), Region IV-A, Benguet, Pangasinan, Iloilo, Cebu, Bacolod City, and Davao City.

All other areas were placed under GCQ status.

In a separate survey also conducted in May, SWS said 16.7 percent of Filipino families or an estimated 4.2 million families experienced involuntary hunger at least once for the past three months.

For those gainfully employed  job and are receiving full pay, the net gainers score is –73. SWS said the score is worse among those who have a job but are not receiving pay (–81), those who never had a job (–80), and those who do not have a job at present but used to have one (–78).