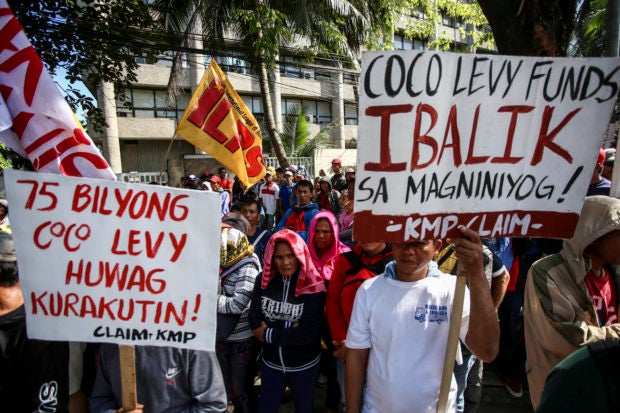 NO CLOSURE Farmers demanding justice and the return of the multibillion-peso coconut levy fund rally at the Philippine Coconut Authority in this Jan. 15, 2019 photo. The coconut farmers say Eduardo Cojuangco Jr., whom they say benefited the most from the fund, died on Tuesday without giving them their money back. —JAM STA ROSA

LUCENA CITY, Quezon City, Philippines — Groups backing demands by coconut farmers for the return of the more than P100 billion in coconut levy funds collected during the Marcos regime lamented that business tycoon Eduardo “Danding” Cojuangco Jr., whom they claimed had largely benefited from the money, had died leaving them penniless and still seeking justice.

“His passing tells us that justice is beyond the reach of ordinary people as those who wronged the public can always have their way of getting away with death,” said Jansept Geronimo, spokesperson for national farmer’s group Kilusan Para sa Tunay na Repormang Agraryo at Katarungang Panlipunan (Katarungan).

He said that among small coconut farmers, Cojuangco’s “most unforgettable legacy” was the coconut levy. They had long been calling for the return of the fund “to its real owners, the Filipino coconut farmers,” Geronimo said.

“But Danding, using his legal might and formidable influence within and outside the government, blocked all efforts to recover the coco levy fund,” he said.

The coconut levy was a tax imposed by dictator Ferdinand Marcos on the produce of coconut farmers between 1973 and 1982, supposedly to develop the coconut industry and benefit the coconut growers.

Through Republic Act No. 6260, a tax of 55 centavos was imposed initially on the first sale of every 100 kilos of copra.

Cojuangco was a member of the board of the Philippine Coconut Authority (PCA) which used coconut levy funds to acquire what became the United Coconut Planters Bank (UCPB). He became its president and chief operating officer.

The PCA and UCPB later established the Coconut Industry Investment Fund (CIIF), a group of 14 holding companies whose assets include 47 percent of SMC.

Geronimo expects the struggle for the recovery of the coco levy fund will face more hurdles with Cojuangco’s death.

He said there also was “a legal and justice system that has not worked for the poor.”

Geronimo said his father, Pedro, 73, was one of the coconut farmers across the country who had contributed to the fund.

“He is now in bed with Parkinson’s disease and stroke. But he has never lost hope that the faded coco levy certificates that he still has in his possession would still be monetized,” he said in a phone interview.

Geronimo, 38, who hails from Candelaria town, said all his family members were coconut farmers and almost all of them were coco levy fund contributors.

“I got involved in the struggle for the return of the levy fund in my earnest desire to bring justice to my family and the rest of coconut farmers across the country,” he said.

Katarungan reiterated its appeal to President Duterte to tap the coco levy fund to help the peasants cope with the hardships of living amid the COVID-19 pandemic.

“But the question is, where is the coco levy fund now? How does the government intend to respond to the pandemic with funding from coco levy?” he said.

For the militant Kilusang Magbubukid ng Pilipinas (KMP), Cojuangco’s death was just another demise of a Marcos crony over which they could not feel sorry.

“We cannot condole with the death of crony and tycoon Eduardo Danding Cojuangco Jr. as the P105-billion coco levy fund remain unreturned and unremitted to its intended beneficiaries — small coconut farmers and their families,” Danilo Ramos, KMP chair said in a statement. “What we really want to say is good riddance.”

Ramos said that under the administrations from Marcos to Durterte, Cojuangco “was able to amass great wealth, power and influence after plundering the coco levy fund.”

Shortly after the 1986 Edsa Revolution, all coco levy-acquired assets were sequestered by the government but during the administration of President Joseph Estrada, Cojuangco won provisional control of a 20-percent block of shares in SMC, allowing him to return as chair and CEO.

In 2003, the Sandiganbayan forfeited 72.2 percent of UCPB in favor of the government.

After a long legal dispute of whether the government owns the coco levy funds and its assets, the Supreme Court ruled in 2011 that the funds were “public in character” but left it to the Sandiganbayan to decide who owned the assets acquired by the funds.

But the high court also ruled that 20 percent of the shares in SMC claimed by Cojuangco had been legally acquired.

In January 2012, the high court affirmed a ruling that awarded the 27-percent block of SMC shares, registered in the name of the CIIF and its holding companies, to the government, which has been holding it in trust for the country’s coconut farmers.

The 27-percent stake had been reduced to about 24 percent after it was diluted with the investment of Japanese brewer Kirin in SMC.

Also in 2012, Cojuangco sold his stake in SMC to a group of trusted allies led by SMC president Ramon Ang, but he kept his post as chair and CEO of the conglomerate.

Cojuangco and 58 other defendants, including Marcos and his widow, Imelda, were charged in July 1987 in what has become the coco levy cases in connection with alleged improper or illegal use of the coconut funds.

Pending with the Sandiganbayan as of Dec. 31, 2018, is a civil case that was filed by the Presidential Commission on Good Government to recover SMC shares of stock registered in the name of the CIIF holding companies. The estimated value of assets under litigation totals about P24 billion.