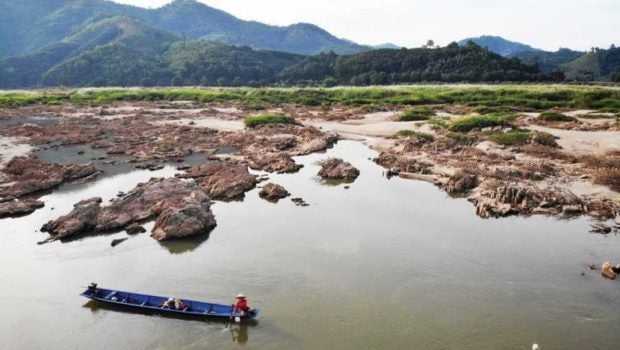 A fisherman on a boat along the Mekong River in Pak Chom district in the northeastern Thai province of Loei. AFP via The Phnom Penh Post/Asia News Network

Increasing regional efforts to provide faster and more accurate forecasts for floods and droughts are vital in dealing with these issues, the report said.

It said the hydro-meteorological monitoring network used to collect data from the Mekong basin would need to be expanded.

“The countries along the lower Mekong River need to step up their collective efforts in addressing the problems facing them now and in the future by ensuring transparency, quality and timeliness in water data sharing.

The MRC Secretariat’s CEO An Pich Hatda confirmed that modernizing the current data systems using advanced technology would be necessary.

“Severe droughts in the lower Mekong basin have caused substantial economic losses due to the damaging of crops, negative impacts on the environment, and adverse effects on people’s livelihoods,” he said.

Cambodia National Mekong Committee (CNMC) secretary-general So Sophort could not be reached for comment on Tuesday.

Cambodian Youth Network’s research and advocacy program manager and environmental activist Sar Mory told The Post on Tuesday that his organization has requested the MRC and countries in the Mekong River sub-region to stop building hydro dams along the river to maintain its natural flow.

“The countries in the Mekong River sub-region should strongly consider maintaining and restoring forests because the loss of forests contributes to droughts and limits the flow of water during the rainy season,” he said.

The countries should cooperate with the Chinese government, he said, to make sure all decisions about the river are made transparently and equally because it runs through many countries and is joint property.

China agreed to continue providing water level and rainfall data to the MRC during the flood season, starting from June 1 until October 31, every year for five years, said an MRC press release.

The MRC approved a 10-year basin development strategy to help solve these issues on June 4.

Sophort told The Post on June 14 that the new strategy is a joint document created by Cambodia, Laos, Thailand and Vietnam. The countries plan to work together to sustainably manage the development of the Mekong basin.

“They need to cooperate better so the existing resources are sustainably ensured for the long run,” he said.

Floods and droughts destroyed some 67,000ha of paddy fields in the Kingdom last year, resulting in minimal declines to yields and land available for cultivation, the Ministry of Agriculture reported in February.