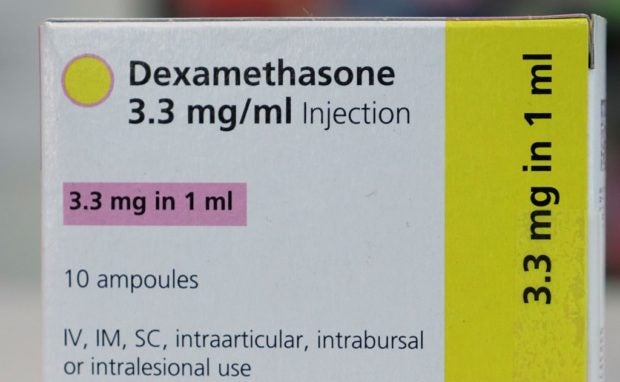 A box of dexamethasone injection ampoules is photographed at a chemists shop in London on June 16, 2020. – The steroid dexamethasone was shown Tuesday to be the first drug to significantly reduce the risk of death among severe COVID-19 cases, in trial results hailed as a “major breakthrough” in the fight against the disease. (Photo by Arman SOLDIN / AFP)

An “extremely severe” cluster of cases in Beijing cast doubt over efforts to get the virus under control although Tuesday’s news from Britain came as a boost after months of grim statistics.

Federal Reserve Chair Jerome Powell meanwhile warned that the US economy is unlikely to recover as long as “significant uncertainty” remains over the course of the pandemic.

Researchers led by a team from the University of Oxford administered the widely available steroid dexamethasone to more than 2,000 severely ill COVID-19 patients.

Among those who could only breathe with the help of a ventilator, dexamethasone reduced deaths by 35 percent.

“Dexamethasone is the first drug to be shown to improve survival in COVID-19. This is an extremely welcome result,” said Peter Horby, professor of Emerging Infectious Diseases in the Nuffield Department of Medicine, University of Oxford.

“Dexamethasone is inexpensive, on the shelf, and can be used immediately to save lives worldwide.”

“This is great news and I congratulate the Government of the UK, the University of Oxford, and the many hospitals and patients in the UK who have contributed to this lifesaving scientific breakthrough,” WHO head Tedros Adhanom Ghebreyesus said.

More than eight million people have now been infected by the virus worldwide since it first emerged in China late last year, claiming 436,813 lives so far as the tolls still surge in Latin America and South Asia.

In Europe, caseloads and death rates have broadly declined.

The UK, however, is still struggling with the world’s third largest death toll and New Zealand — which had ended community transmission — said two new cases reported there were recent arrivals from Britain.

European countries are eager to drop coronavirus restrictions to save the imminent summer tourist season but Spain warned that it may quarantine British visitors should the UK persist with its plan to quarantine all overseas arrivals.

The latest reminder of the underlying threat came from China, which had largely brought its outbreak under control, as 27 infections were reported in Beijing, where a new cluster linked to a wholesale food market has sparked mass testing and neighborhood lockdowns.

“The epidemic situation in the capital is extremely severe,” Beijing city spokesman Xu Hejian warned, as the number of confirmed infections rose to 106.

Beijing authorities urged residents to not leave the city and closed schools again as officials scrambled to contain the outbreak.

In the US, the central bank chief Powell once again pledged the Fed will use all of its policy tools to help ensure recovery from the outbreak which he said has inflicted the worst pain on low-income and minority groups.

Despite a surprising rebound in employment in May, the US economy has shed nearly 20 million jobs since February and the contraction of GDP in the April-June quarter “is likely to be the most severe on record,” he said.

While China’s new cases have caused concern about a resurgence of the virus, the disease is also gaining momentum in other regions with massive populations.

Known infections in India have crossed 330,000 and already stretched authorities are bracing for the monsoon season, which causes outbreaks of other illnesses such as dengue fever and malaria every year.

But COVID-19 “has left us helpless… and the monsoon will make things even more difficult.”

In Latin America, countries are struggling to contain the disease while trying to ease the crushing economic blow dealt by widespread lockdowns and social distancing measures.

Peru reported its economy shrank by more than 40 percent year-on-year in April, while Chile extended its state of emergency by three months.

Ecuador, which has the region’s fourth highest official virus death toll after Brazil, Mexico and Peru, has extended its state of emergency for 60 more days.

The United States also agreed to keep its borders with Mexico and Canada closed until July 21, extending travel restrictions for a third time because of the pandemic.

After a gradual drop in new cases, European nations including Belgium, France, Germany and Greece have lifted border restrictions hoping to boost tourism and travel over the summer months.

But disruptions to normal social and economic life continue.

In Britain, the Premier League football season resumes on Wednesday, but in empty stadiums.

There are fears some supporters will ignore social-distancing rules by congregating outside the grounds where their teams are playing, risking new clusters of infections.

League chief executive Richard Masters said: “Please stay away and enjoy the matches at home. By turning up to the game you are putting things at jeopardy.”

The US Open tennis championships will also go ahead as scheduled in August without spectators, officials confirmed on Tuesday.

After weeks of uncertainty surrounding the tournament — which is being staged in the epicentre of the US virus crisis — New York Governor Andrew Cuomo formally agreed to allow it to go ahead.