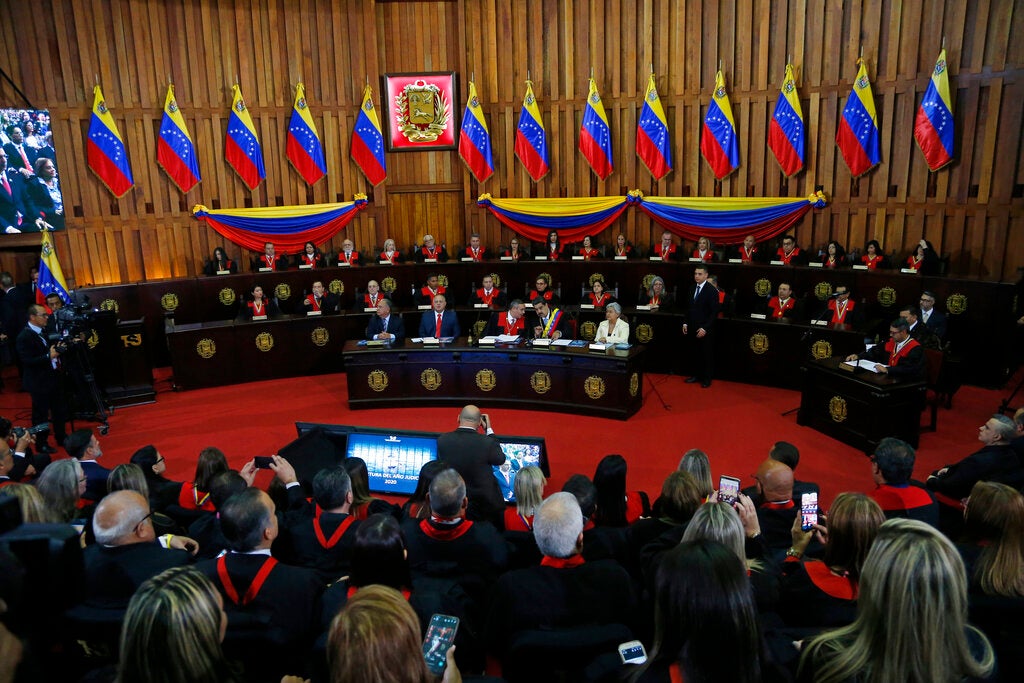 The court suspended and replaced the board of directors for the Justice First party a day after the same move against the Democratic Action, one of the nation’s oldest and largest parties. It was part of a “necessary restructuring process,” the court said in rulings posted on Facebook.

No legal action was taken, however, against Popular Will, the party of opposition leader Juan Guaidó, who seeks to oust Maduro with backing from the U.S. and nearly 60 other nations.

The political coalition opposed to the Maduro’s ruling United Socialist Party of Venezuela is made up of more than a dozen parties. This attempt to divide them won’t succeed, Guaidó said.

“On the contrary, these actions strengthen us,” Guaidó said. “The dictatorship is going to fall, and the republic is going to be reborn.”

A once-wealthy oil nation, Venezuela is in a deepening political and economic crisis after two decades of socialist rule that has driven mass migration and scarcities of basic goods. The U.S. and scores of other nations consider Maduro’s government illegitimate and recognize Guaidó as interim president, a position he claims as head of the National Assembly.

Maduro on state TV accused opposition parties, which have controlled the National Assembly for the last five years, of robbing Venezuela of its wealth and plotting a foreign invasion aimed at ending his socialist government.

The National Assembly is the only branch of government Maduro doesn’t control. That will change with the next election, he said.

Among Justice First’s most notable members is Henrique Capriles, who lost the presidency race to Hugo Chávez in 2012 and again the next year after Chávez’s death in a contest against Maduro. Officials then banned Capriles from politics for 15 years, although he remains an important player behind the scenes.

Justice First is also the party of influential politician Julio Borges, who lives in exile in Colombia. Leopoldo López, who remains in Caracas but holed up at a foreign ambassador’s residence, helped found the party before then launching Popular Will.

Henry Ramos Allup, the leader of Democratic Action, said he would not abide by the court’s ruling that tries to remove him from his leadership role. A political ally of Guaidó, Allup accused Maduro of “hijacking” the party.

“Democratic Action is going to resist these acts of shamelessness,” Allup said.

The court days earlier seated a new elections council ahead of a vote expected this year in a battle for control of the National Assembly.

The unilateral appointments to the council were especially disheartening to some moderate opponents of Maduro who had been trying to reach an accord with the government for minimal guarantees for a free and fair vote.

The new National Electoral Council includes names of members of Democratic Action, who Allup said he does not recognize. Critics say that including the opposition party members is an attempt by Maduro’s government of giving it legitimacy.

Democratic Action, which was formed in the 1930s, is among Venezuela’s four most powerful opposition parties. They also include Guaidó’s Popular Will along with Justice First and A New Time. Officials have not set a date for the election, which is required this year by the nation’s constitution.

Bernabé Gutiérrez, the court’s choice as the Democratic Actions new leader, announced Tuesday that the party will participate in the upcoming election. The “historic decision” to restructure the board ends years of “dictatorship” within the party, Gutiérrez said, without naming Allup.

As the new Justice First leader the court appointed lawmaker José Brito, who was expelled from the party last year after being accused of receiving a payoff from Maduro’s government to buy his loyalty, a claim he has rejected.