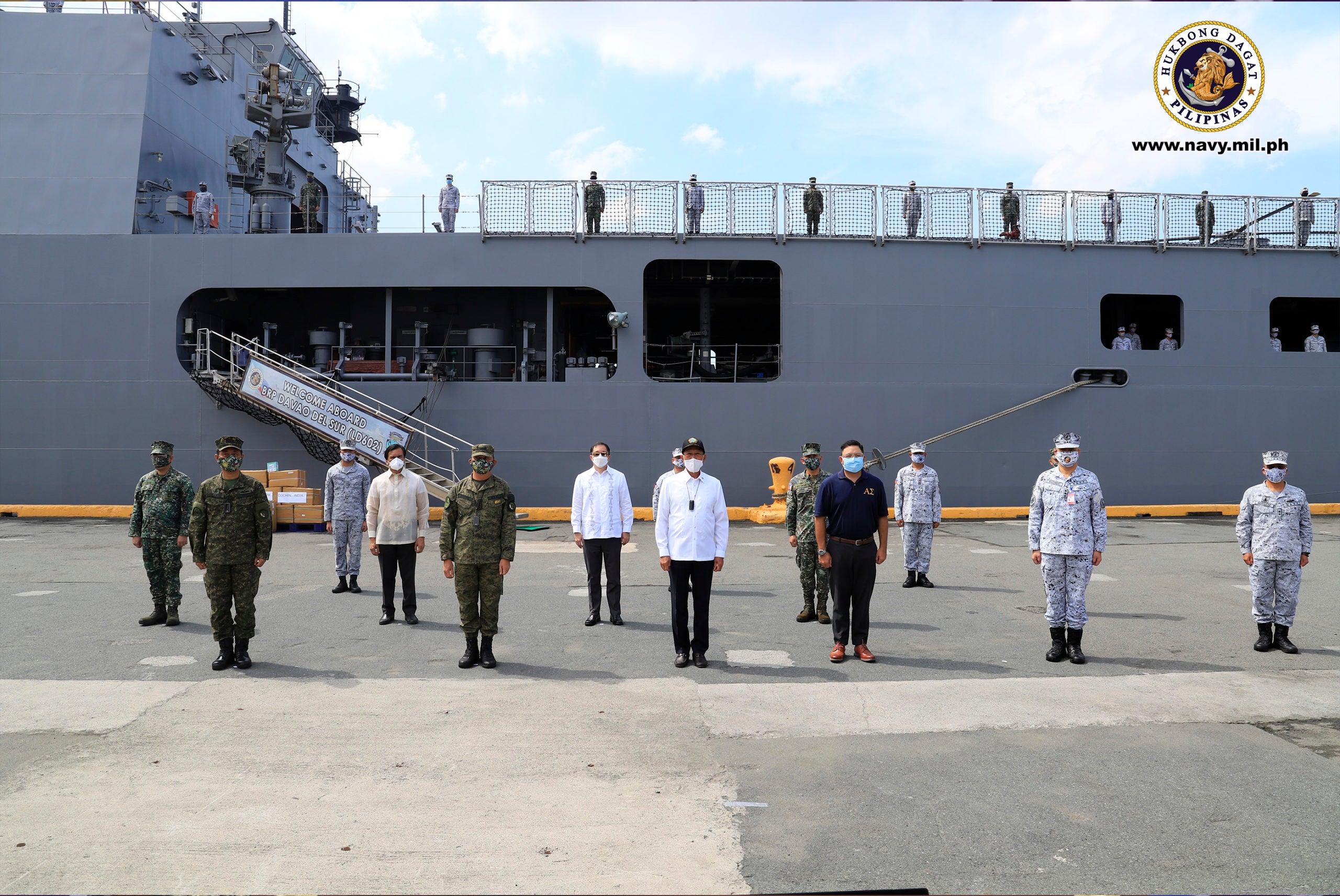 The Naval Task Force 82, composed of sailors, Marines and reservists of BRP Ramon Alcaraz (PS-16) and BRP Davao del Sur (LD-602), was welcomed by top military officials in a simple ceremony on Tuesday (June 16) at the South Harbor in Manila. NPAO

MANILA, Philippines—A Philippine Navy contingent is back home in Manila after five months of overseas deployment, regarded as the Navy’s farthest and longest voyage so far.

The Naval Task Force 82, composed of sailors, Marines and reservists of BRP Ramon Alcaraz (PS-16) and BRP Davao del Sur (LD-602), was welcomed by top military officials in a simple ceremony on Tuesday (June 16) at the South Harbor in Manila.

The Philippine government deployed the two ships to Oman last January to help repatriate overseas Filipino workers, who would want to return home or be evacuated to safer areas following the assassination by the United States of top Iranian general Qasem Soleimani, which drove tensions close to a full-blown war in the Middle East.

Tensions have eased after a few weeks and OFWs have opted not to return to the Philippines. The ships, however, stayed put in Oman upon the orders of the Philippine government.

While in Oman, the Navy opened its ships to the Filipino community as part of a mission that it calls show-the-flag. The Philippine Navy contingent officials also paid a courtesy call on the Royal Navy of Oman chief Rear Admiral Abdullah Bin Khasim Al Raisi.

The BRP Ramon Alcaraz and BRP Davao del Sur were supposed to be sailing back to the Philippines on May 7 after making a short stop in India to pick up stranded tourists and donations of personal protective equipment.

But fire broke out at the main engine room of BRP Ramon Alcaraz five hours after it left port, forcing it to return to India with BRP Davao del Sur.

As the fire-damaged ship was being repaired, BRP Davao del Sur sailed alone on May 9, but a brewing storm, Amphan, forced her to go back to Cochin, India on May 11.

Both ships left India on May 27 and then dropped anchor at the Port of Colombo in Sri Lanka to pick up stranded tourists. It finally arrived in Manila on June 12.

Task Force 82 commander, Col. Noel Beleran, described the deployment as “historic” and “an all time first for the Philippine Navy.”

It was the Navy’s first time to cross Indian Ocean and to sail through Andaman Sea, Arabian Sea and Gulf of Oman.

It also marked the first time for the Navy to make a port call at Sultan Qaboos Port in Oman, Colombo, Sri Lanka and Cochin, India.

Unfortunately, one of the Navy’s sailors had to be left behind in India for treatment of injuries suffered during the fire in the Alcaraz’s engine room, according to Beleran.

He said it was quite a challenge to keep troop and civilian morale up “after having been in lockdown and confined within ship’s limits for almost three months.” Beleran said he was able to get through with the help of his staff.