Pompeo to meet top Chinese official in Hawaii amid tensions 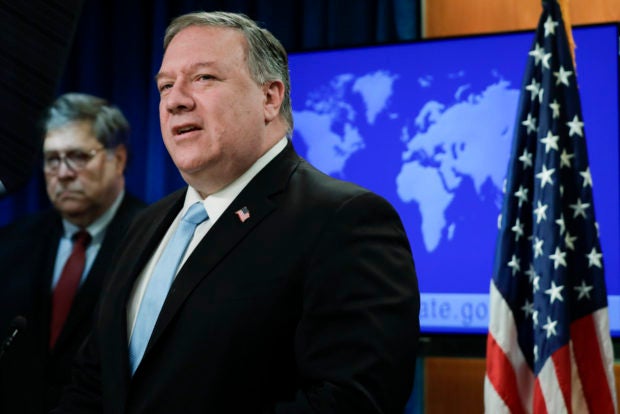 Secretary of State Mike Pompeo speaks as Attorney General William Barr listens, during a joint briefing, Thursday, June 11, 2020, at the State Department in Washington, on an executive order signed by President Donald Trump aimed at the International Criminal Court. Trump has lobbed a broadside attack against the International Criminal Court. He’s authorizing economic sanctions and travel restrictions against court workers directly involved in investigating American troops and intelligence officials for possible war crimes in Afghanistan without U.S. consent. The executive order Trump signed on Thursday marks his administration’s latest attack against international organizations, treaties, and agreements that do not hew to its policies. (Yuri Gripas/Pool via AP)

WASHINGTON — Secretary of State Mike Pompeo will make a brief trip to Hawaii this week for closed-door talks with a senior Chinese official, as relations between the two nations have plummeted amid numerous disputes.

The State Department said Pompeo and his deputy Stephen Biegun would travel to Hawaii on Tuesday and Wednesday but offered no additional detail about his plans. People familiar with the trip said Pompeo and Biegun will meet Wednesday with a Chinese delegation led by Yang Jiechi, the Chinese Communist Party’s top foreign affairs official.

The private discussions are set to take place at Hickam Air Force Base in Honolulu and will cover the wide range of issues that have set the world’s two largest economies on a collision path, according to the people familiar with the trip who were not authorized to discuss it publicly and spoke on condition of anonymity.

Washington and Beijing are at odds over trade, China’s handling of the coronavirus pandemic, human rights, the status of Hong Kong, and increasing Chinese assertiveness in the South China Sea. The presence of Biegun, who is also the U.S. special envoy for North Korea, suggested that the stalemate in the Trump administration’s diplomatic efforts with Pyongyang would also be on the agenda.

In recent months, the two sides have ramped up their hostile rhetoric and taken reciprocal steps to expel journalists and restrict diplomats’ ability to travel.

Read Next
Davao region having 2-day COVID-19 lull after 316 percent spike in cases last week
EDITORS' PICK
PH to send 584 athletes, 161 officials to Vietnam SEA Games
Gear up and get ready to play with Yamaha Mio Gear
SSS: Members on home quarantine due to COVID-19 can apply for sickness benefit
Acer starts the year off strong with the Aspire Vero National Geographic Edition
Kalinga, Ifugao, Mt. Province, N. Samar will be under Alert Level 4 from Jan 21-31
Mobile COVID-19 vaccination for commuters, transport workers set at PITX
MOST READ
Imelda Marcos trends on Twitter after octogenarian jailed for allegedly stealing mangoes
Mayor Vico counters vice mayor: ‘Did I say anything about his family?’
Municipal court in Pangasinan sets arraignment for ‘Lolo Narding’
‘Unbelievable!’ Pacquiao hits DA’s plan to import 60,000 MT of fish
Don't miss out on the latest news and information.