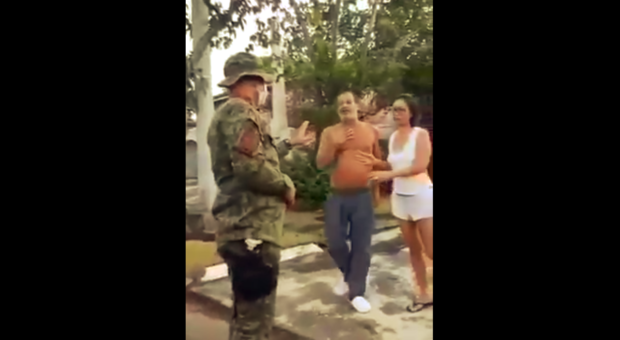 Screenshot of video from Makati City police showing Javier Salvador Parra and his wife (right) and a police officer.

MANILA, Philippines — The Bureau of Immigration (BI) has blacklisted a Spanish expatriate who figured in a viral verbal altercation over quarantine rules with a Makati City police officer in a posh village last April.

Immigration Commissioner Jaime Morente ordered the inclusion of Javier Salvador Parra on June 3 on the Immigration blacklist after it was confirmed that he did not return since leaving the country three days after the incident on April 26.

“Now that he has been placed in our immigration blacklist, he is now perpetually banned from re-entering the Philippines for being an undesirable alien,” Morente said in a statement.

“Foreigners who disrespect our laws and persons of authority do not deserve the privilege to stay in our country,” he added.

Morente said he issued the blacklist order against Parra “to serve notice” and “warn” foreigners that they should not flaunt the country’s laws and “insult” police officers enforcing the law.

“Even when he is out of the country he could still file his answer to the allegations by engaging the services of a lawyer who could submit a counter-affidavit on his behalf. It was obvious that he really intended to disregard the notice by just ignoring it,” Manahan said.

The altercation between Parra and Senior Master Sergeant Roland Von Madrona happened after the police officer called out the foreigner’s helper for not wearing a face mask while supposedly watering outside the foreigner’s residence.
During the altercation, Madrona was seen tackling an irate Parra to the ground to arrest him. Parra, however, evaded arrest after entering the front door of his house.

Parra and the police officer figured an an altercation which led to the irate foreigner being tackled.  The police officer said he spotted Parra’s house helper outside the residence without a face mask and had to be fined.