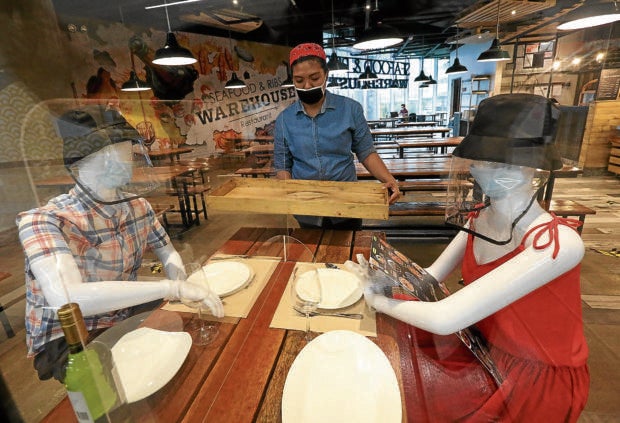 MANILA, Philippines — Several cities and provinces have asked the government to place them under tougher quarantine restrictions, as the country continues to report more coronavirus cases.

But there are also those that seek a deescalation of the quarantine rules, presidential spokesperson Harry Roque said on Monday.

President Duterte was expected to decide on Monday night whether to maintain or amend the quarantine restrictions imposed on different parts of the country, Roque said.

The factors he would take into consideration were the case doubling time, the critical care capacity, and concern for the economy, Roque said at a press briefing.

On June 1, the government allowed more businesses to reopen in order to revive the economy after three months of strict lockdown.

The rest of the country is under modified general community quarantine (MGCQ).

Cebu City, one of the hardest-hit places, asked the Inter-Agency Task Force for the Management of Emerging Infectious Diseases to place it back under the stricter modified enhanced community quarantine, Roque said.

None of the 17 Metro Manila mayors sent any appeal about the quarantine level, he said.

Abra, Apayao, Caraga region, and Lanao del Sur had asked to be placed under GCQ from MGCQ, he said.

On the other hand, Pangasinan, Angeles City, Nueva Ecija, Zambales, Pampanga, Cavite, Cebu province, Dagupan City, Batanes and Davao region asked that they be placed under MGCQ from GCQ.

The Philippines had seen sharp spikes in infections since the easing of restrictions on June 1, but the Department of Health (DOH) said on Monday that the country’s health-care system had been able to manage the increases and was “not overwhelmed.”

Health Undersecretary Maria Rosario Vergeire told an online press briefing that the current critical care use rate was 35 percent, meaning there were still enough intensive care beds and mechanical ventilators in hospitals across the country.

When the DOH recommends that a region be placed under a certain quarantine level, she said, its decision is based not only on the number of cases there but also on how well the health-care system can take care of patients.

The two metrics go “hand in hand” when the DOH makes a decision, she added.

“The case doubling time in [Metro Manila] has already slowed down, even for the whole Philippines. The critical care utilization rate is just about 35 percent … That was the objective of flattening the curve, for us to extend time and have more time to prepare the capacity of our health system,” Vergeire said.

“Currently, our health system is not overwhelmed based on our analysis of our data,” she said.

On Monday, the DOH reported 490 additional infections, pushing the national caseload to 26,420. Of the new cases, 348 were patients who tested positive during the last three days.

Metro Manila accounted for most of these cases, with 131, followed by Central Visayas, with 79.

There were 142 late cases, or patients who tested positive at least four days ago.

Metro Manila had the largest number of these cases—21.

The DOH recorded 298 more recoveries, raising the number of survivors to 6,252.

But the death toll rose to 1,098 with the deaths of 10 more patients. Only four of these deaths occurred in June; the rest were belatedly reported to the DOH.