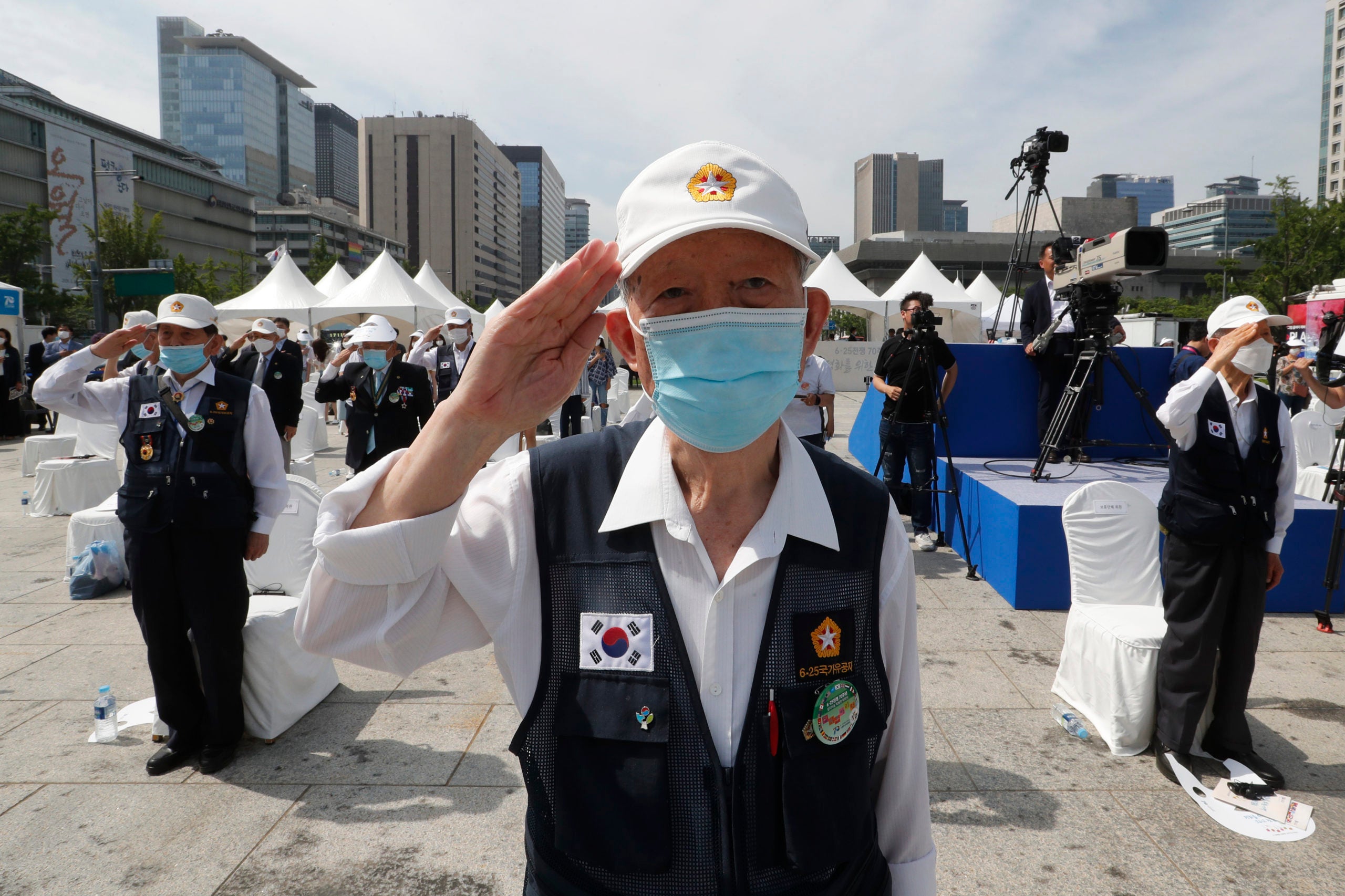 Korean War veterans of South Korea salute during a ceremony to unveil an installation artwork to commemorate the upcoming 70th anniversary of the Korean War, in Seoul, South Korea, Monday, June 15, 2020. South Korea on Sunday convened an emergency security meeting and urged North Korea to uphold reconciliation agreements, hours after the North threatened to demolish a liaison office and take military action against its rival. (AP Photo/Ahn Young-joon)

SEOUL, South Korea — South Korea’s president called on North Korea to stop raising animosities and return to talks, saying Monday the rivals must not reverse the peace deals that he and North Korean leader Kim Jong Un reached during 2018 summits.

President Moon Jae-in’s efforts to defuse rising animosities came as North Korea threatened Friday to destroy a liaison office and take unspecified military steps against South Korea. If made, the office’s demolition could pose a serious setback to Moon’s efforts to restore Korean reconciliation and find a negotiated solution of the North Korean nuclear issue.

“North Korea must not sever communications and create tensions to turn back the clock to a past confrontational period,” Moon said during a meeting with top presidential advisers, according to his office. “We must not push back the pledges of peace that Chairman Kim Jong Un and I made” in two summits in 2018.

Moon, a liberal who met Kim three times in 2018, was behind now-dormant diplomacy between Pyongyang and Washington, including the first summit between Kim and President Donald Trump in Singapore in 2018.

During two of the three inter-Korean summits, Moon and Kim agreed to achieve denuclearization of the Korean Peninsula and take other steps to boost exchanges and dial down a military standoff. Those summits initially helped to improve their countries’ ties significantly, before their relations became strained again after the breakdown of a second Kim-Trump summit in Vietnam in early 2019.

North Korea has recently unleashed a slew of harsh rhetoric against South Korea, accusing it of failing to prevent activists from launching propaganda leaflets across their border. In an apparent bid to soothe North Korea, Moon’s government vowed to ban civilian leafleting campaign. But North Korea has said the South Korean response lacks sincerity.

Some observers say North Korea is extremely frustrated because Seoul has failed to break away from Washington and revive stalled joint economic projects held back by U.S.-led sanctions. They also speculate North Korea initially thought Moon would help it win badly needed sanctions relief but got upset after Kim returned home empty handed from the 2019 summit with Trump.

Moon said the two Koreas must take the initiative in finding a breakthrough, calling the nations “the masters of the destiny for the Korean Peninsula.” He said his government will keep striving to promoting dialogue with North Korea.

The Koreas remain split along the world’s most heavily fortified border since they were divided into a U.S.-backed South Korea and a Soviet-controlled North Korea at the end of the World War II in 1945.