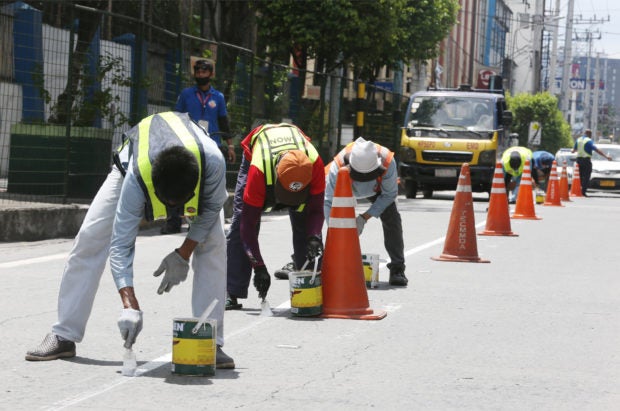 FOR BIKES ONLY Metropolitan Manila Development Authority personnel paint the markings for the bike lane rising on Edsa. Steel bollards will be added later to protect cyclists from other vehicles passing through the 24-kilometer stretch of Metro Manila’s busiest thoroughfare. —NIÑO JESUS ORBETA

MANILA, Philippines — As part of the promotion of a cycling culture in the Philippines, a party list lawmaker on Sunday proposed giving people who bike to work every day additional tax perks, extra pay credits or food vouchers.

Rep. Ronnie Ong of Ang Probinsyano party list said the incentives could be incorporated in the proposed bicycle law apart from the provision on protected bike lanes.

Through this, the government “may be able to convert people to continue using bicycles in their daily commute even after the pandemic is over and life, as we know it, is back to full normalcy,” he said in a statement.

The coronavirus pandemic, according to Ong, is forcing a lot of people to use bikes for mobility, presenting a “once-in-a-lifetime opportunity for the government to solve two of the country’s biggest problems: pollution and traffic.”

It can adopt the scheme in the Netherlands, where the government pays its citizens about P11 for every kilometer cycled tax-free.

In the United Kingdom, employees are given lease-to-own options when buying a bike and a “mileage allowance” of around P13 per mile is also given to those who use their bikes for business purposes.

“Of course, these are rich countries so we could instead provide incentives in the form of food vouchers which can only be used to buy food commodities,” he said.

Ong added that more Filipinos would definitely choose bikes over public transport if the government could provide them not only the infrastructure to keep cycling safe and convenient but also the right incentives.

He said creating a cycling culture in the Philippines could provide a long-term solution to the traffic gridlock in Metro Manila and other highly urbanized areas that cost the government an estimated P3.5 billion in economic losses per day.

This would also reduce government expenses on health care, repair and maintenance, and pollution control.

The Metropolitan Manila Development Authority (MMDA) has started working on the bike lanes on Edsa, setting up temporary markings on one of the outermost lanes in both the northbound and southbound directions.

The Department of Transportation said the bike lane should be completed between Tuesday and Thursday although the steel bollards which will set it apart from those for other vehicles were still “undergoing procurement.”

Under the reconfigured Edsa traffic scheme, the two innermost lanes would be used by buses, while the remaining ones would be set aside for other vehicles, including bicycles.

After a meeting on Thursday, Transport Secretary Arthur Tugade said he and MMDA Chair Danilo Lim agreed to “fast-track the establishment of the protected bike lanes on the roads and not on sidewalks.”

“As more people are shifting to this active mode of transport amid the crisis situation due to the coronavirus pandemic, our goal is to move people while making sure of their safety,” he added.