Amal Clooney on upcoming Maria Ressa cyberlibel verdict: ‘A signal of what lies ahead’ 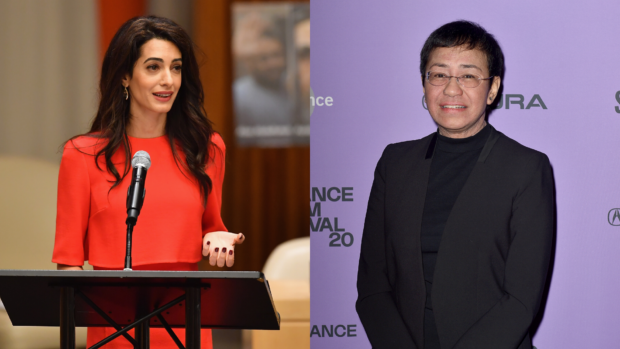 International human rights lawyer Amal Clooney stressed that the cyberlibel charge against Maria Ressa is baseless, as a court is set to deliver a verdict tomorrow, June 15.

Clooney described Ressa’s cyberlibel case as “one of the most brazen and consequential cases of the decade” in her op-ed piece in The Washington Post last Friday, June 12.

Ressa was charged with cyberlibel over an article published on the news site Rappler back in 2012. The said piece stated that former Supreme Court Chief Justice Renato Corona was using the car of “controversial” businessman Wilfredo Keng, who allegedly had a “shady past.”

“It is clear to any reasonable observer that criminal charges for this do not stand up,” Clooney said while emphasizing that the law the charges are based on did not exist when the article was published.

“Perhaps it should come as no surprise that the authorities would be so brazen,” she added before noting how President Rodrigo Duterte had called journalists as “spies” who are not “exempted from assassination.”

The lawyer then described the Anti-Terrorism Act of 2020 (Senate Bill 1083) and the shutdown of ABS-CBN as “government abuse,” as she noted that independent judges should not be complicit with them because they are “our only hope to counter it.”

Reiterating the gravity of the upcoming ruling, Clooney stated, “The way this case is handled will be a signal of what lies ahead.”

“So the world will be watching on Monday, and no one should be watching more closely than the [United States] government,” she noted. “Because as well as being Filipino, Maria is American.”

Clooney added that a hallmark of U.S. President Donald Trump’s administration is “to strongly defend its citizens captured and falsely imprisoned abroad.”

“If Maria is convicted and locked up for doing her work, the message to other journalists and independent voices is clear: Keep quiet, or you’ll be next,” she said. “Let’s hope that on Monday a trial judge in Manila will send a very different message. And that if she doesn’t, we will see a robust response.” Ryan Arcadio/JB