MANILA, Philippines — The Philippine Charity Sweepstakes Office (PCSO), which lost an estimated P13 billion in revenue due to the new coronavirus disease (COVID-19) lockdown, has asked President Duterte to allow it to resume its lotto operations and other games after the government relaxed its quarantine regulations.

PCSO General Manager Royina Garma on Saturday said she was still waiting for the response to the agency’s request from the Office of the President.

“Most likely our agency lost P13 billion in potential revenue since the lockdown,” Garma said during Saturday’s Laging Handa briefing.

Once the PCSO reopens, it will conduct a special lotto draw for those who had bought advance tickets before the lockdown began, Garma said.

She was referring to tickets containing the same numbers but which could be drawn multiple times­­—up to a maximum of six draws. Many who bet on the same set of lotto numbers pay for several draws in advance to avoid lining up to buy tickets for each draw. 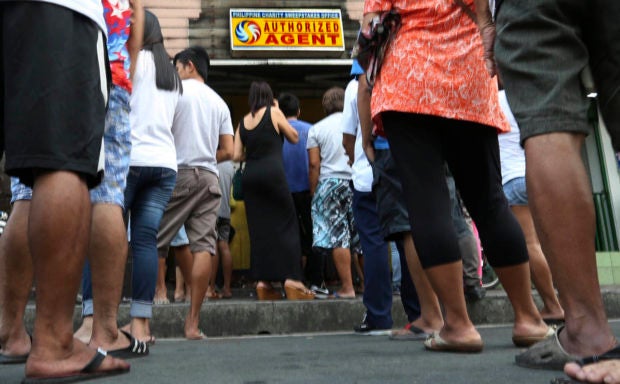 BETTING ON IT | The Philippine Charity Sweepstakes Office awaits President Duterte’s go signal to resume its popular lotto operations and other games, but with physical distancing and other safety measures. —EDWIN BACASMAS

Garma said the maximum six draws could be completed in 15 days, according to their simulation. The winning bettors could collect their prizes as long as their tickets remain intact, she added.

To encourage more bettors, the PCSO announced last week that it would roll back the lotto ticket price to P20 from P24 in 2018 when it was raised in compliance with the new tax reform law.

Before all its games were suspended when the enhanced community quarantine on Luzon started on March 17, the PCSO was running five major lotto games where bettors select six out of 42, 45, 49, 55 and 58 numbers.

The revenue from these games funds its various social programs, including medical assistance.

Garma said the PCSO might use mobile applications and automated betting machines to eliminate person-to-person exposure.

“We have already set the minimum technical specifications that our agents could use,” she said. “This is still subject [to] board approval but it is up for discussion.”

The use of these applications and machines would help the PCSO comply with regulations allowing only 50 percent of employees to be present at their workplaces, Garma said.

She estimated that the new betting system could be available in two to three months.

Garma said the PCSO continued to provide medical assistance amid the quarantine even if its games had been suspended.

She said it had provided P30 million per week through its medical access program and distributed 50 ambulances to local governments.

It gave P300 million to various hospitals for the purchase of equipment for their COVID-19 response.

Garma said its branch offices were open to receive requests for assistance.

These requests could also be submitted online, she added.

­—With a report from Inquirer Research