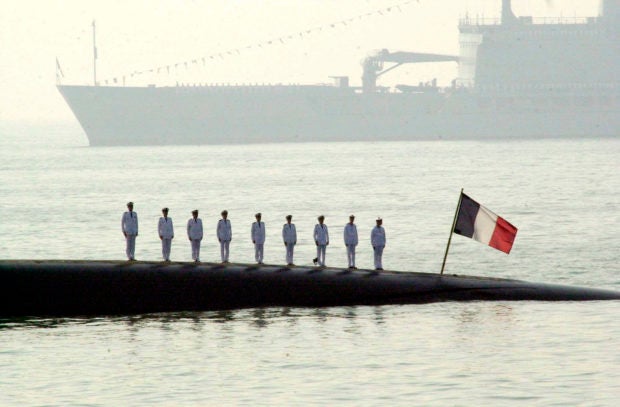 In this February 17, 2001 file photo, French naval officers on board the French nuclear submarine Perle stand at attention during India’s first International Fleet Review, off Bombay’s coast. Firefighters battled a blaze on the Perle that broke out Friday, June 12, 2020, during renovation work. The submarine’s nuclear reactor, nuclear fuel, and weapons were removed five months ago to prepare for the renovations, so not at risk from the blaze, according to an official with the regional maritime authority. (AP Photo/Sherwin Crasto, File)

PARIS — After a 14-hour battle, firefighters extinguished a blaze that broke out on a French nuclear submarine during renovation work.

The Defense Ministry said no one was injured, and insisted the risk of radioactivity released by the fire is “zero” because the vessel’s nuclear fuel and all its weapons had been removed before the renovations began in January.

But it took 100 firefighters from three different emergency services as well as specialized submarine teams more than 14 hours to put out the blaze, the ministry said. It is unclear whether the ship is salvageable.

The fire broke out Friday morning in the Mediterranean naval port of Toulon, and was extinguished after midnight, the ministry said in a statement Saturday.

All workers and sailors aboard the submarine when the fire broke out were safely evacuated, the regional maritime authority said. Local newspaper Var-Matin published images of white smoke rising from the port, and reported that some of those aboard fled via the submarine’s torpedo holds.

The submarine, named Perle, is the most recent of France’s six Ruby-class nuclear attack submarines, and entered service in 1993, the official said.