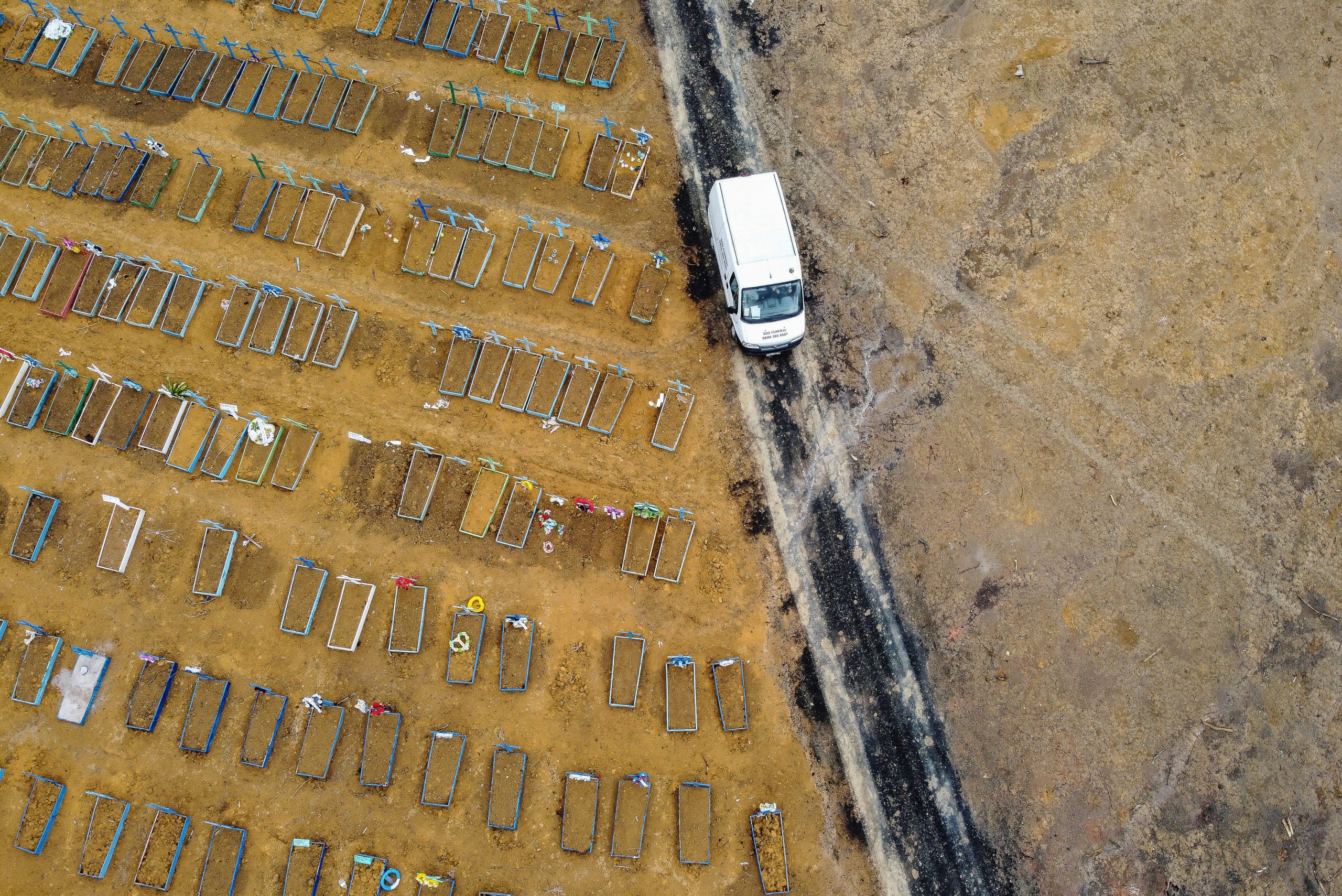 Aerial view showing a new area (R) cleared to accommodate new graves to cope with demand during the COVID-19 coronavirus pandemic in the Nossa Senhora Aperecida cemetery in Manaus, Brazil, on June 12, 2020. – The pandemic has killed at least 421,691 people worldwide since it surfaced in China late last year, according to an AFP tally at 1100 GMT on Friday, based on official sources. Latin America has become the epicenter of the pandemic with more than 73,600 deaths, over half of which have been in Brazil. (Photo by Michael DANTAS / AFP)

RIO DE JANEIRO, Brazil — Brazil on Friday claimed the unenviable position of having the second-highest coronavirus death toll in the world behind the United States, where several states have posted record daily case totals, signaling the crisis is far from over.

US and European stocks ended the week on an upswing after a rout sparked by the US data and fresh evidence of the economic damage caused by virus-related lockdowns, with British GDP shrinking by a record 20.4 percent in April.

Meanwhile, in several European countries, the focus shifted to the courts, and who might eventually be pinned with the blame for the global financial and health crisis.

Brazil’s health ministry recorded 909 deaths in the past 24 hours, putting the total at 41,828 — meaning the country of 212 million people has surpassed Britain in terms of virus-linked fatalities.

Experts warn the actual number of cases in Latin America’s biggest economy could be many times higher than the confirmed figure of 828,810.

And the country’s President Jair Bolsonaro has dismissed the deadly virus as a “little flu,” and berated state officials for their virus lockdowns.

Brazil has emerged as a new epicenter in the world’s battle with the novel coronavirus, which emerged in China late last year.

In Central and South America, more than 1.5 million people have been infected — and more than 70,000 of them have died — with no signs of the disease slowing.

But in the US, which has confirmed the most virus deaths at more than 114,000, more than a dozen states including two of the most populous, Texas, and Florida, reported their highest-ever daily case totals this week.

“It’s important that we remember that this situation is unprecedented. And that the pandemic has not ended,” Robert Redfield, director of the Centers for Disease Control and Prevention, told a media briefing on Friday.

Nevertheless, US President Donald Trump and many local officials are unbowed in their determination to get the world’s biggest economy back on track.

The virus and resulting lockdowns have caused a spike in US unemployment — 44.2 million people have filed claims for jobless benefits since mid-March.

Worldwide, the pandemic has killed more than 422,000 people and infected more than 7.5 million.

In Italy, one of the countries hardest hit by the virus, prosecutors questioned Prime Minister Giuseppe Conte over his government’s initial response.

In the country’s northern Lombardy region, an investigation has been launched into why a quarantined “red zone” was not enforced around two towns sooner.

And in Bergamo province, 50 family members of coronavirus victims filed complaints this week, the first such legal group action in Italy, over how the crisis was handled.

Europe is also pushing ahead with its exit from lockdown, with a number of countries preparing to reopen borders on a limited basis on Monday after the EU Commission urged a relaxation of restrictions.

France said it would gradually reopen its borders to non-Schengen countries from July 1.

Greece said it would welcome tourists again, although Britons remain barred — and passengers from Italy, Spain, and the Netherlands must undergo tests on arrival.

Germany said it would end land border checks on Monday.

And Italy said it would allow amateur contact sports — including team sports — from June 25.

‘Fight is not over’

Yet world health officials have warned that the virus is far from contained.

“Most people remain susceptible to this virus and the threat of resurgence remains very real.”

In China, Beijing said Friday it would delay primary school students returning to class after three new cases emerged in the capital — the first after two months of no reported infections there.

China has largely brought domestic infections under control since the virus emerged in the central city of Wuhan, and the majority of cases in recent months have been among overseas nationals returning home.

In India, experts are warning the country is still a long way from reaching its virus peak.

Deaths from coronavirus in New Delhi are almost twice as high as official figures show, a city leader said.