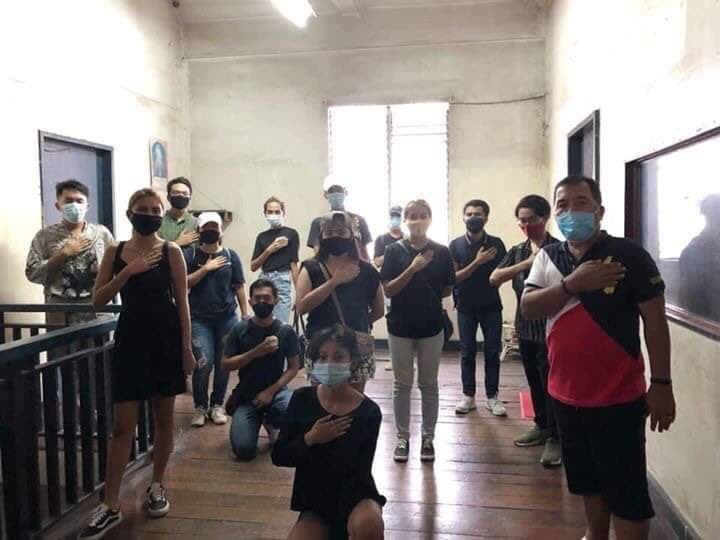 DEFIANT. Some 14 MSU-IIT students in Iligan City vowed to continue the fight against the Anti-Terrorism Bill amid their arrest and detention for almost eight hours. —STAND-IIT FACEBOOK PAGE

The students were issued citation tickets and made to pay P1,000 each as fine, then released from detention.

According to police, the fine was based on a local ordinance in response to the coronavirus pandemic.

The 14 students (not 16 as earlier reported) walked out of the Iligan City Police Station (ICPS) 5 at around 6 p.m. Friday.

They were arrested while holding a small rally at a park in Barangay Palao around 10 a.m., in time for the commemoration of Independence Day.

Among others, the students called for the junking of the anti-terrorism bill and demanded the conduct of mass testing for the coronavirus.

According to Major Allan Abalde, ICPS 5 chief, the students belonged to the group Students’ Alliance for the Advancement of Democratic Rights in Mindanao State University—Iligan Institute of Technology (STAND-IIT).

Abalde said that when policemen noticed that physical distancing was no longer observed by the students, personnel from ICPS 5 and the police’s City Intelligence Unit were prompted “to intervene in the activity at around 11:00 a.m.”

Abalde added that they only invited the students to the police station for questioning.

The students were released to their parents, according to Abalde.

Gil Nambatac, the student group’s spokesperson, said many of the students were shaken and deeply traumatized when policemen forced them into waiting vehicles.

“Many of us were shaken because we did not expect the police to disperse and arrest us,” Nambatac added.

Nambatac said they have planned for the protest to be peaceful and held the activity in the middle of the rotunda fronting a big school located in Barangay Palao.

He said that because of their harrowing experience, a group of psychology students have volunteered to hold trauma-healing sessions with them this weekend.

Earlier on Friday, Iligan City Mayor Celso Regencia, who led the local government’s commemoration of the 122nd Independence Day, announced that he has signed a manifesto strongly supporting the Anti-Terrorism Bill which is now awaiting President Duterte’s signature.