MANILA, Philippines — The Philippine National Police (PNP) on Friday said it will investigate personnel of Lucban Municipal Police Station (MPS) in Quezon who were behind a social media post that was victim-blaming women.

“PNP has now ordered for conduct of probe on this incident,” PNP spokesman Brig. Gen. Bernard Banac said in a statement to reporters.

“Police chief of Lucban MPS and all personnel who may be involved will be made to explain why they allowed posting of such statements in their social media account and why no administrative sanctions shall be imposed upon them for the negative reactions their post has elicited from the public,” he added.

On its official Facebook account, Lucban Municipal Police Station posted a public advisory that called for an end to violence against women.

However, the second paragraph of the post suggested that women should avoid “wearing short clothes” if they don’t want to get harassed.

(Girls, don’t wear short clothes then report to us when you’re harassed. Think of that.) 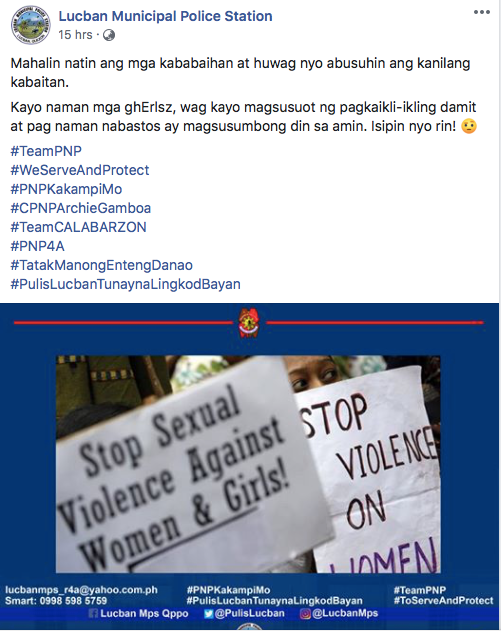 Screenshot of the controversial post from Lucban Municipal Police Station.

A netizen on Twitter took a screenshot of the controversial post and expressed disgust against the Lucban police. He also asked the accused law enforcers to surrender their badges.

(Until now there are still policemen engaging in victim blaming on cases of rape. You are trash Lucban PNP! You must surrender your badges. It is Independence Day today and you post something like this?) 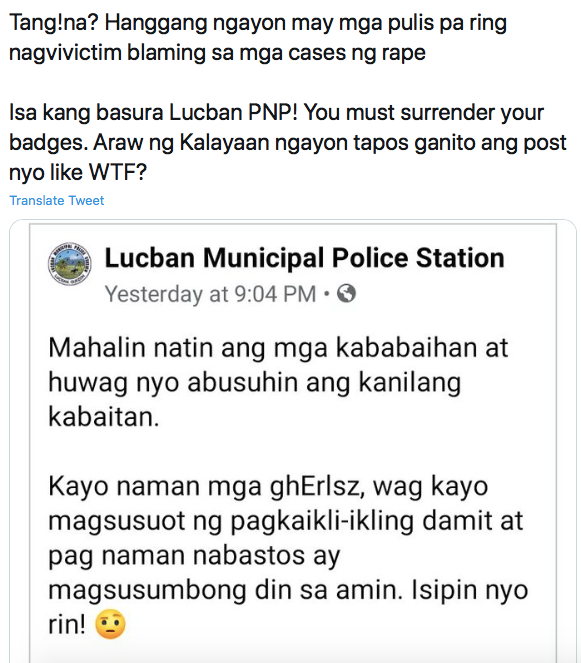 It can be recalled that the Angono police drew flak after they posted tips to avoid rape, which also suggested victim-blaming women.