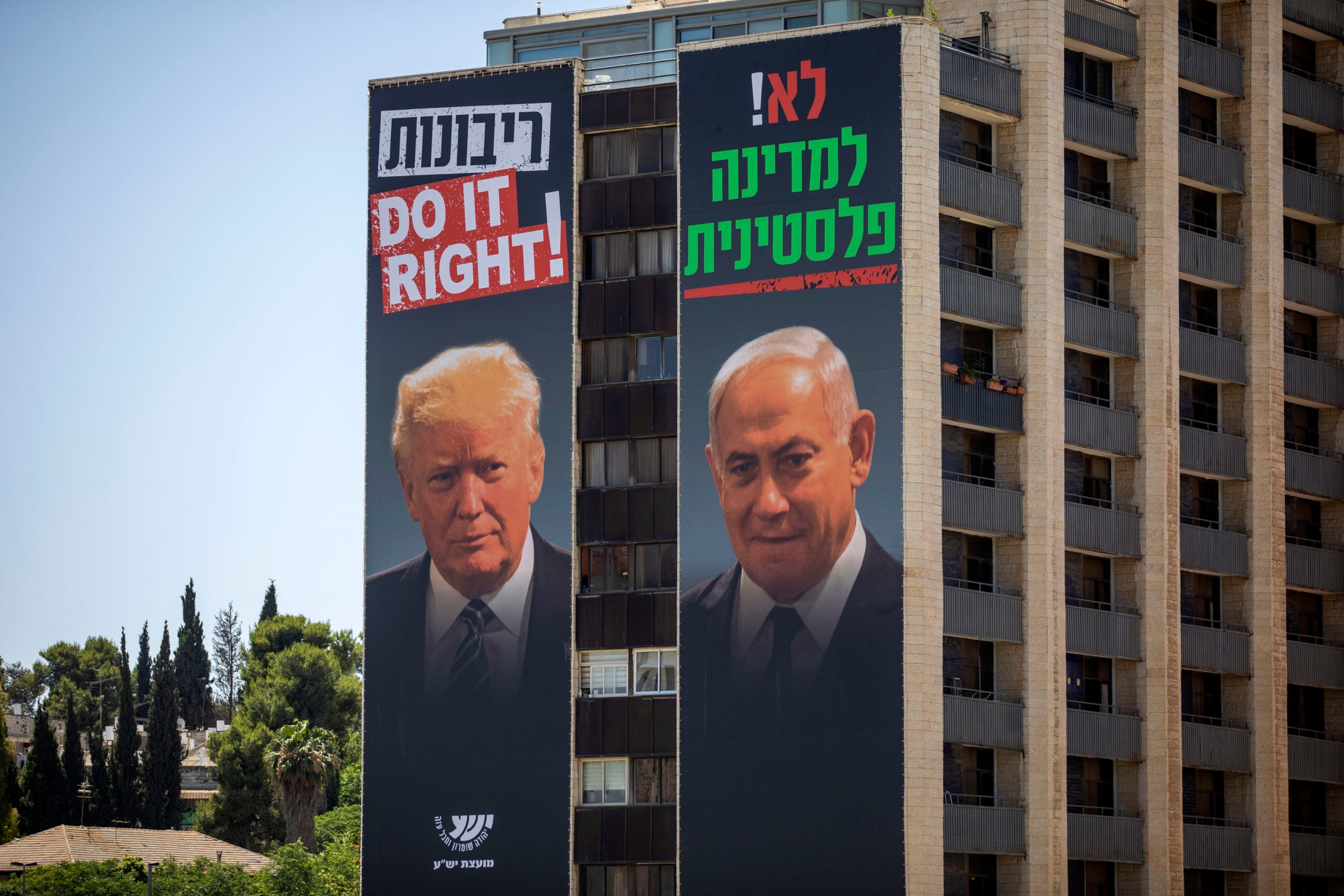 Billboards show Israeli Prime Minister Benjamin Netanyahu, right, and U.S President Donald Trump in Jerusalem, placed by Yesha Council, an organization of municipal councils of Jewish settlements in the West Bank, Wednesday, June 10, 2020. Hebrew on the billboard reads “No for a Palestinian state” and “Sovereignty Do it right.” (AP Photo/Oded Balilty)

JERUSALEM  — The United Arab Emirates’ ambassador to the U.S. on Friday warned Israel against annexing the Jordan Valley and other parts of the occupied West Bank, saying the move would “upend” Israel’s efforts to improve ties with Arab countries.

A former Israeli prime minister meanwhile dismissed arguments that Israel must maintain control of the Jordan Valley for security purposes as “nonsense.”

UAE envoy Yousef Al Otaiba was among three Arab ambassadors who attended President Donald Trump’s January unveiling of his Mideast plan, which allows Israel to annex around 30% of the West Bank and was immediately rejected by the Palestinians.

In an editorial published by Israel’s Yediot Aharonot newspaper, Al Otaiba warned that Israel’s planned annexation — a process that could begin as soon as July 1 — would “ignite violence and rouse extremists.”

“It will send shock waves around the region, especially in Jordan whose stability — often taken for granted — benefits the entire region, particularly Israel,” Al Otaiba wrote.

The UAE, a close and influential U.S. military ally, has been a major focus of Israel’s efforts in recent years to improve ties with Gulf Arab countries that share its concerns about Iran.

The two countries have no formal diplomatic ties, but the Emirates have allowed Israeli officials to visit, and the Israeli national anthem was played after an athlete won gold in an Abu Dhabi judo tournament. Israel also has a small mission representing its interests at the International Renewable Energy Agency in Abu Dhabi.

Al Otaiba warned that annexation would be a major setback.

“Annexation will certainly and immediately upend Israeli aspirations for improved security, economic and cultural ties with the Arab world and with UAE,” he wrote.

Israeli Prime Minister Benjamin Netanyahu has vowed to annex the Jordan Valley, which makes up around a quarter of the West Bank, as well as Israel’s far-flung Jewish settlements. That would make it virtually impossible to establish a viable Palestinian state alongside Israel, which is still widely seen as the only way to resolve the conflict.

The Palestinians want a state in the occupied West Bank, Gaza and east Jerusalem, territories seized by Israel in the 1967 war. The Trump plan would give them a limited form of statehood in scattered enclaves surrounded by Israel if they meet a long list of conditions.

Arab countries have welcomed the Trump administration’s efforts but have rejected the plan itself, reaffirming their support for a two-state solution based on the 1967 lines.

“In the UAE and across much of the Arab world, we would like to believe Israel is an opportunity, not an enemy. We face too many common dangers and see the great potential of warmer ties,” Al Otaiba wrote.

“Israel’s decision on annexation will be an unmistakable signal of whether it sees it the same way.”

Netanyahu has argued that Israel must maintain full control of the Jordan Valley to meet its security needs. Israeli leaders have long expressed fears that withdrawing from the valley could open them up to a future Arab invasion from the east.

But in an interview with an Arab-language media outlet, former Israeli Prime Minister Ehud Olmert dismissed those concerns as “nonsense.”

“We can defend our border without the Jordan Valley, and anyone who says it is important for security is lying to the people,” he said in an interview with Elaph, a private Saudi-owned media outlet based in the U.K.

Olmert, who came close to reaching a peace deal with the Palestinians before stepping down in 2009 to face corruption charges, told Elaph he had reached an agreement with King Abdullah II of Jordan to deploy NATO peacekeepers along the border after an Israeli withdrawal.

Olmert is a harsh critic of Netanyahu, who succeeded him. There have been no substantive peace talks between Israel and the Palestinians since Olmert left office.