MONTEVIDEO, Uruguay — A worrying social crisis is brewing in Latin America where the coronavirus pandemic is spiralling, experts are warning, as fears of a second wave in the United States sent shivers through global markets. 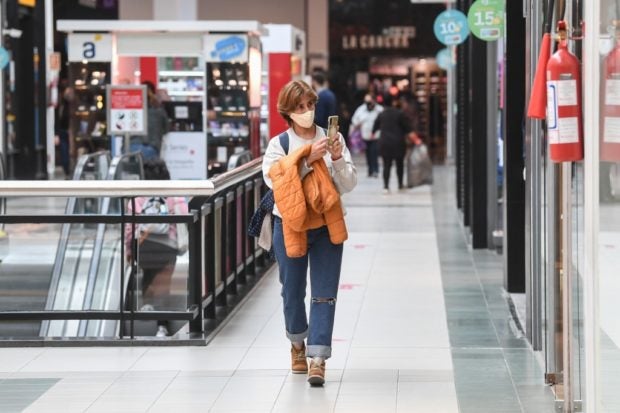 A woman wearing a face mask walks inside a shopping mall in Montevideo on June 9, 2020, amid the new coronavirus pandemic. – Under a strict health protocol, most shopping centers reopened their doors Tuesday in Uruguay, in another step towards the “new normal,” while the country keeps flattening the curve of COVID-19 contagions. Photo by PABLO PORCIUNCULA / AFP

More than 1.5 million people have been infected in Central and South America — 70,000 of them are already dead — with no signs of the disease slowing, especially in hard-hit Brazil.

The crisis could provoke the region’s “worst recession in history,” the UN Economic Commission for Latin America and the Caribbean (ECLAC) said.

“We’re worried the region could come out of this crisis with more debt, poorer, hungrier and with more unemployment. And most of all, angry,” said ECLAC general secretary Alicia Barcena.

The fracture lines in Brazilian society are already evident.

Protesting that stance, campaigners on Thursday dug 100 graves on Copacabana Beach in Rio de Janeiro, each marked with a black cross, to denounce what they called the “incompetence” of authorities.

“We are here to demand a change of attitude from the president… who must understand that our nation is facing the most difficult moment in its history,” said Antonio Carlos Costa.

In the US, President Donald Trump was leading the charge to continue reopening the economy, announcing plans for a set of re-election rallies this month.

That is despite signs that the pandemic is not tamed there, with more than 2 million infections and 114,000 deaths.

Figures showed a spike in new infections in key states including Texas, California, Arizona and Florida.

Equities and oil sank Friday in Asian trade, following a day of reckoning on American markets, where the main stock index plunged almost 7 percent to log one of its worst days in recent memory.

The virus and resulting lockdowns have caused a spike in US unemployment — 44.2 million people have been forced out of jobs since mid-March — but stock markets have seemingly ignored the bad news on Main Street for weeks.

Analysts blamed profit-taking for the big falls, which came after a huge run-up of up to 50 percent since March, with many saying investors had run ahead of themselves on hopes for a V-shaped recovery as states and countries across Europe reopen.

But at a ceremony in Geneva, World Health Organization chief Tedros Adhanom Ghebreyesus warned the world was a long way from safety.

“The fight is not over. Most people remain susceptible to this virus and the threat of resurgence remains very real.”

That is particularly the case in poorer parts of the world, where the spread of the disease appears to be gathering pace, including in Africa.

In India, experts are warning the country is still a long way from its peak.

Exhausted doctors at the Max Smart Super Speciality Hospital in New Delhi said they may not be able to cope if the number of cases continues to increase.

“All of us are hoping for the best, but we are mentally and physically prepared for the worst,” said Dr Deven Juneja.

The long-term effects of the virus could devastate the lives of tens of millions of poor people, the International Labour Organization (ILO) and UNICEF warned Friday.

“As the pandemic wreaks havoc on family incomes, without support, many could resort to child labour,” ILO chief Guy Ryder said.

The two groups noted that the number of children locked in child labour had declined by 94 million since 2000.

But “the COVID-19 pandemic poses very real risks of backtracking.”

According to the World Bank, the number of people in extreme poverty could potentially skyrocket by up to 60 million this year alone.