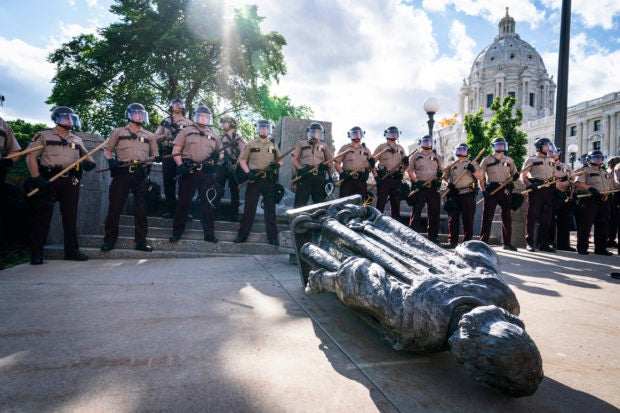 This file photo shows Minnesota State Troopers surrounding a statue of Christopher Columbus after it was toppled in front of the Minnesota State Capitol on Wednesday, June 10, 2020, in St. Paul, Minnesota. The statue was later towed away. (Leila Navidi/Star Tribune via AP FILE)

CAMDEN, NEW JERSEY — A statue of Christopher Columbus in this southern New Jersey city, has been taken down, joining others across the country.

The city of Camden released a statement calling the Farnham Park statue a “controversial symbol” that has “long pained residents of the community.”

Protesters mobilized by the death of George Floyd at the hands of police have called for the removal of statues of Columbus around the country, saying the Italian explorer is responsible for the genocide and exploitation of native peoples in the Americas.

Video from local news outlets showed the statue coming down Thursday night. The city’s statement says “a plan to reexamine these outdated symbols of racial division and injustices” is overdue. The majority of Camden residents are people of color.

Statues of Columbus have also been toppled or vandalized in cities such as Miami; Richmond, Virginia; St. Paul, Minnesota, and Boston, where one was decapitated.

Meanwhile, the use of controversial “no-knock” warrants has been banned in Louisville, Kentucky, and the new ordinance was named for Breonna Taylor, who was fatally shot after officers burst into her home.

The city’s Metro Council unanimously voted Thursday night to ban the controversial warrants after days of protests and calls for reform.

Taylor, who was studying to become a nurse, was shot eight times by officers conducting a narcotics investigation on March 13. No drugs were found at her home.

“I’m just going to say, Breonna, that’s all she wanted to do was save lives, so with this law, she will continue to get to do that,” Taylor’s mother, Tamika Palmer, said after the law was passed. “She would be so happy.”

The law bans the use of the warrants by Louisville Metro officers. Police typically use them in drug cases over concern that evidence could be destroyed if they announce their arrival. Kentucky Sen. Rand Paul also introduced federal legislation Thursday that would ban the use of no-knock warrants nationwide.