US pledges to reduce Iraq troops as tensions ease 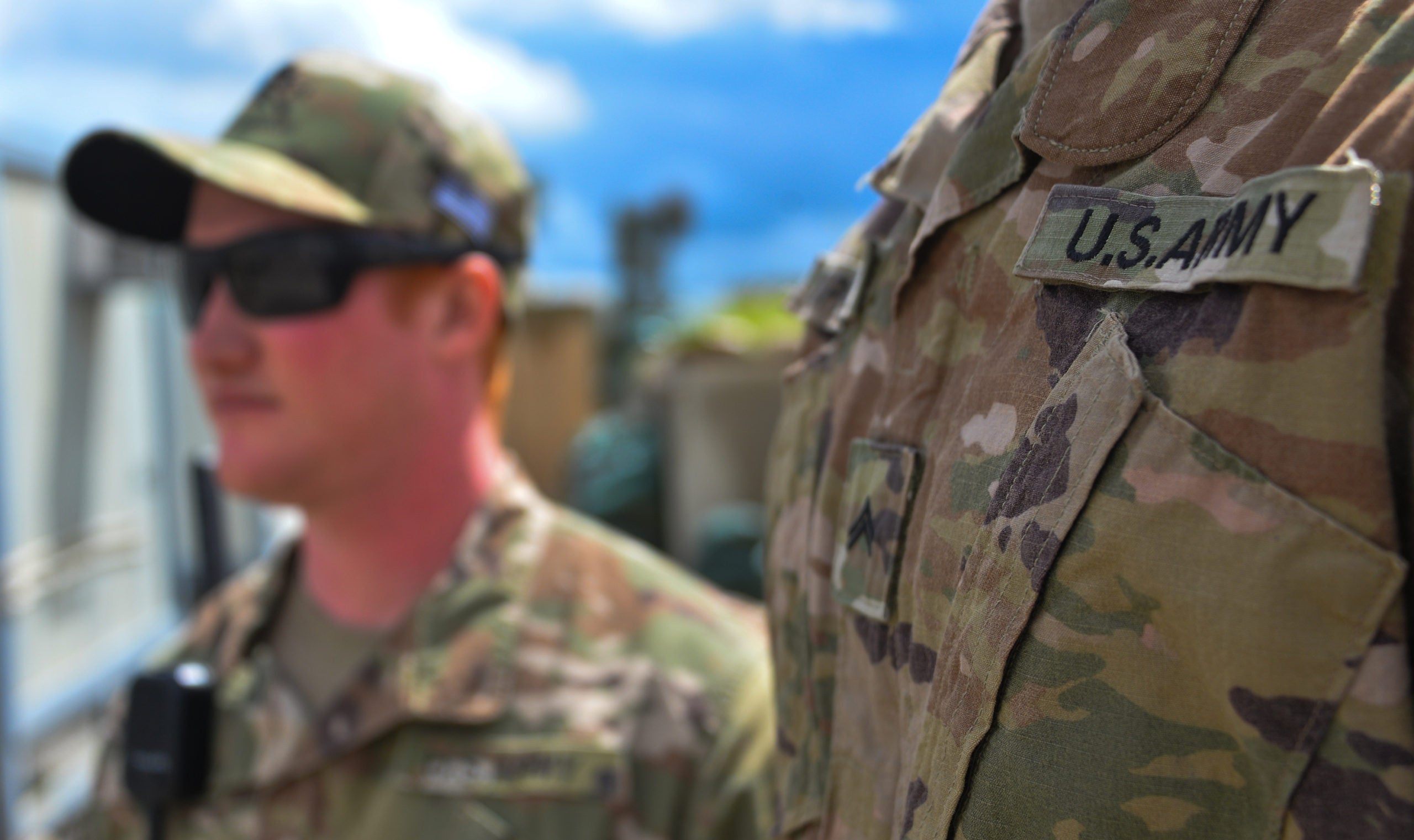 US troops from the Combined Joint Task Force stand at a former presidential palace turned into an Iraqi base where some forces of the coalition were stationed in Mosul in the northern Iraqi province of Nineveh during a handover ceremony to Iraqi forces on March 30, 2020. (Photo by Zaid AL-OBEIDI / AFP)

BAGHDAD, Iraq — The United States said Thursday it would reduce troops in Iraq in the coming months as friction between the two countries eased under a new U.S.-friendly premier in Baghdad.

The United States also promised support to prop up the struggling Iraqi economy as the two nations held their first strategic dialogue in more than a decade.

Tensions skyrocketed following a US strike on Baghdad in January that killed Iranian general Qasem Soleimani and Iraqi commander Abu Mahdi al-Muhandis, with lawmakers in Baghdad demanding the expulsion of the roughly 5,200 US troops in the country.

President Donald Trump responded by threatening crippling sanctions and, according to US military sources, Washington began planning a vast bombing spree against groups blamed for the rockets.

In a joint statement, the United States said that the reason for its military’s return to Iraq in 2014 — defeating extremists from the Islamic State group — had made major headway.

“The two countries recognized that in light of significant progress towards eliminating the ISIS threat, over the coming months the US would continue reducing forces from Iraq,” a joint statement said.

“The United States reiterated that it does not seek nor request permanent bases or a permanent military presence in Iraq.”

The coalition has already consolidated to just three bases in recent months, down from a dozen.

The joint statement, hashed out ahead of time, did not give figures and Thursday’s dialogue was brief, with David Schenker, the top US diplomat for the Middle East, telling reporters the delegations did not discuss a timeline for reducing troops.

Due to coronavirus travel restrictions, top-level talks expected to take place in Baghdad were demoted to a brief online kick-off session.

Tensions have calmed substantially since Mustafa Kadhemi — an ex-spy chief with close ties to the US and its allies in the region — took the reins as Iraq’s premier in May.

Two Iraqi officials said Kadhemi has been invited to the White House this year, a diplomatic olive branch his predecessor Adel Abdel Mahdi had never received.

“There was a lack of confidence in the relationship with the previous government,” one of the officials said.

Iraq in the joint statement promised to protect US bases that have seen a barrage of rocket fire blamed on paramilitary groups tied to Iran, a top adversary for the Trump administration.

The United States said it would look to encourage investment and promote economic reform in Iraq, which was rocked last year by major protests against unemployment and corruption.

“We will support the new government through the international financial institutions to help it meet the challenge of COVID-19 and declining oil revenues,” Schenker said.

After Kadhemi took charge, the United States extended a waiver from American sanctions to let Iraq keep importing needed gas from Iran, although the exemption runs out in September.

“The entire US-Iraq bilateral relationship will not be fixed in a single day,” said Robert Ford, an analyst at the Middle East Institute and a US diplomat in Baghdad during the last round of strategic talks in 2008, which ironed out the US drawdown from the occupation that began after the 2003 invasion to topple Saddam Hussein.

“But for once, we seem to have the right people in the right place at the right time,” he said.

A dramatic or sudden drop could hamper the coalition’s efforts to back an Iraqi fightback against IS sleeper cells, which have escalated attacks in recent weeks.

“Whatever comes out of the dialogue is going to set the future of our strategic relationship,” a top American official from the coalition told AFP.

“Am I still going to fly surveillance drones or not? Do you still want our intelligence?” he added.

Other coalition countries are watching closely.

“The ability of non-US members of the coalition to be in Iraq depends on whether the US can stay. We’re tied down by this dialogue, too,” a Western diplomat told AFP.

The spokesman for the pro-Iran Fatah bloc, Ahmad al-Assadi, has insisted on a six-month deadline for foreign troops’ departure.

On Monday and Wednesday, two rockets hit near Baghdad airport and the American embassy, after weeks of calm.

But the rhetoric was more tempered than usual, with even the hardline Kataeb Hezbollah saying it would take a formal stance on the talks only after the first session.

“These groups are retrenching, which gives Kadhemi some space with the Americans,” Ford said.