Duterte: Battle vs COVID-19 an opportunity to show Filipinos’ gallantry of spirit 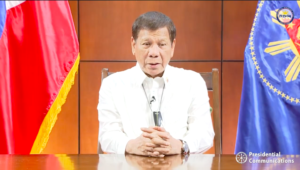 MANILA, Philippines —  For President Rodrigo Duterte, the battle against the coronavirus disease 2019 (COVID-19) is an opportunity to show the Filipinos’ “gallantry of spirit” that was demonstrated by the country’s forefathers upon proclamation of independence.

“One hundred twenty-two years ago, our forefathers proudly proclaimed the birth of the Filipino nation. Today, we honor them for their bravery, heroism and sacrifice as well as we thank them for the gifts of democracy and freedom,” Duterte said in his Independence day message aired Friday during the rites at Rizal Park in Manila.

“As we wage the battle against COVID-19, we now have the opportunity to demonstrate that we possess the same gallantry of spirit and the ability of character as the heroes of our past,” he added.

The President also called on Filipinos to move forward with “courage, hope and optimism” as they face the pandemic, which has so far infected over 24,000 people in the country and resulted in over a thousand deaths.

Duterte was represented by Executive Secretary Salvador Medialdea during the Independence Day rites.

Only 10 persons are allowed to attend the celebration due to the ban on mass gatherings to curb the spread of the virus.