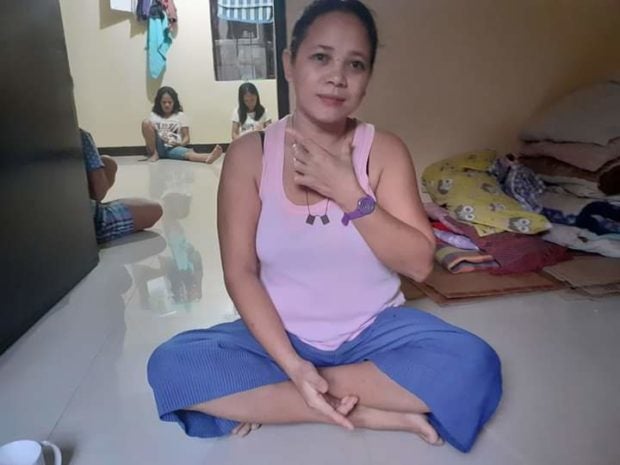 HEALTHIER DAYS Housemaid Michelle Silvertino in a Facebook photo posted on Dec. 15, 2019. Less than six months later, on June 5, a thin and ailing Silvertino was found unconscious on a footbridge in Pasay City, where she waited for five days for a ride home to her hometown in Camarines Sur. She was later pronounced dead on arrival at the Pasay City General Hospital. —MICHELLE SILVERTINO’S FACEBOOK PAGE

MANILA, Philippines — After the death of a stranded woman at a footbridge in Pasay City, a councilor from a municipality in Bicol province has proposed in a local committee hearing on Thursday to deploy focal persons in bus terminals in Metro Manila to accommodate stranded Bicolanos.

The focal persons, he said, shall be assigned at exit points in Cubao, Quezon City, Pasay and Turbina to take care of the needs of Calabangenos. “We are expecting this [quarantine] situation to happen for three to six months,” Councilor Levi Sta. Ana Jr. told the Inquirer on Thursday.

Sta. Ana said the move hopes to ensure that no more Calabangenos will suffer the same sad fate similar to that of Michelle Silvertino, 33, a native of Calabangan, Camarines Sur.

Silvertino died on June 5 while desperately waiting for a bus ride at a footbridge in Brgy. 159 in Pasay City. Her death certificate indicates she died of a probable (severe) novel coronavirus disease.

“Other Bicolanos may seek assistance but our targets are those from Calabanga. Ideally, those who have the area of responsibility, like the Pasay LGU and the barangay should have primary jurisdiction and responsibility on people who are there,” he said.

“Just like our responsibility to all tourists who go here [in Bicol]. We take care of them,” said Sta. Ana, noting that Silvertino appeared to have been “neglected.”

“Kung napabayaan, napabayaan talaga [If she had been neglected, she was actually neglected]. What happened here was negligence. They neglected our fellow Bicolano. This tragedy is very sad. With COVID-19 or not, she should be given the right medical attention. The barangay did not even bother to help her, or isolate her,” Sta. Ana said.

“They should have immediately brought her to the hospital and not sent her back to the footbridge,” Sta. Ana said.

The barangay hall of Brgy. 159, which was just a minute away from the footbridge and supposedly the first responder, did not extend any help to Silvertino when street dwellers sleeping at the area seek help, according to a police report and street dwellers interviewed by Inquirer.

Sta. Ana, who visited the family of Silvertino in Calabanga, vowed to send the latter’s daughter, now 11, to school until college.

The Inquirer learned that Rubiano had met with the police and some heads of the Pasay government on Thursday to look into the incident and come up with the proper response.

A police report said the policemen intervened and brought Silvertino to the hospital as the barangay 159 personnel were not responsive.

Camarines Sur Third District Rep. Gabriel Bordado Jr. said there should be a better system for stranded individuals especially in Pasay City, a hub for several bus terminals and airports.

In an interview on Wednesday, Pasay City Youth Development Officer Adrian Martinez, head of the committee for locally stranded individuals, said there is no centralized hub to shelter all stranded individuals as most spaces are already occupied by persons being treated for COVID-19, but the Pasay City is helping them get transportation and rapid testing.

“There is no system and proper cascading of information to commuters. The guidelines of the IATF are changing. It should be uniform. If transportation were allowed in Manila, it should also be allowed in Cavite and other areas,” he said.

Silvertino, he said, did not know there was a free bus program offered by VP Leni. The services should be publicized and made known to the public, he added.

“People were expecting, public transportation was already available during the general community quarantine… Michelle was scheduled for Bicol only on June 6. Imagine, had she known the bus service on June 1, she could have been in Bicol by June 3 or 4,” Alviso said.