newsinfo / Metro
Metro
'She did not walk from QC to Pasay' 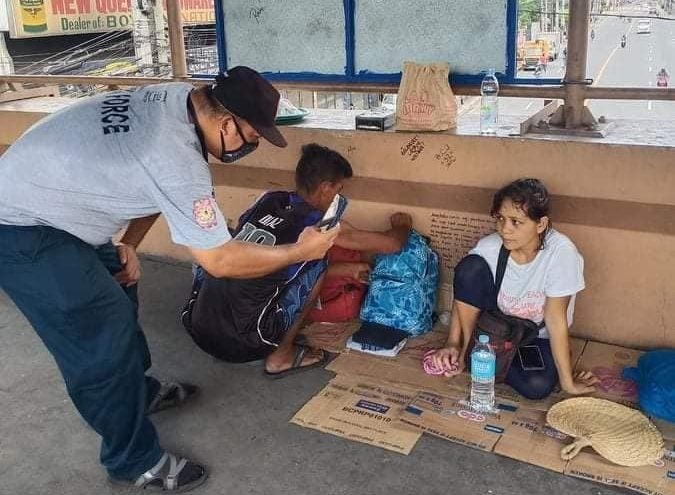 A policeman takes a photo of Silvertinos on June 3 about 10 a.m. and posted her story on Facebook to solicit help. CONTRIBUTED PHOTO

MANILA, Philippines — The employer of Michelle Silvertino, the woman who died while waiting for a bus in a footbridge in Pasay City, refuted circulating reports that she walked straight from Quezon City to Pasay.

“Mae,” who requested anonymity for their family’s safety, told the Inquirer on Thursday that they drove Michelle Silvertino to Cubao terminal first, then to the Pasay bus terminal after the latter refused to go back to their home in Antipolo on May 31.

Silvertino, 33, died on June 5 while stranded for five days at a footbridge in Brgy 159 waiting for bus ride home in Bicol. A medical certificate showed she died due to a probable severe novel coronavirus disease.

Her employers also made the clarifications to the police on Wednesday that they did not leave Silvertino at the Quezon City terminal disputing claims that she walked with her heavy luggage from Cubao to Pasay City.

“We feel very sad and we share sympathy for her family. She wanted to go home; we respect her decision. We reminded her several times about the situation but she might have had very personal matters. We tried to convince her to stay, but insisted for her family,” said Mae’s husband.

Mae’s husband said all terminals were closed at that time.

“We asked her to go back as there were no buses at the Cubao terminal. But she insisted, saying that her sister would wait for her at the bus terminal in Pasay. We drove her to Pasay hoping that she would return to Antipolo upon seeing the situation herself,” Mae said.

In a text message dated May 31, Mae continually checked her situation when they returned home, and asked her if her sister Josie had already fetched her at the terminal.

Mae said they even gave her a face mask, a protective eyewear, a packed food and her last pay of P6,000. They said they forgot to give her alcohol so they texted her to buy one.

“But we saw in her last photos, she was not wearing a face mask anymore,” she added.

Mae said Silvertino was personally hired through a cousin from Camarines Norte.

When COVID-19 happened, Mae said Silvertino started becoming stressed and uneasy, but a text from her mother Marlyn saying nobody would take care of her children in the province had prompted her to ask permission to return to her hometown in Calabanga.

“Te, nakikiulay po ang pamilya ko na kung pwede daa po paulion nanindo ako ta natatakot ngani ako sa virus…ta kong anu man daa kea mangyari sako igdi, sempre po pababayaan daa po nindo ako (Ate, my family is requesting if you can allow me to go home because I am afraid of the virus. If ever something happens to me, you will not take care of me),” she wrote around 12:18 pm of May 31.

Mae said she allowed her to leave, despite her contentions as she knew there were really no buses yet because she was very insistent and had been asking to go home for a week already.

She even said they have already found her a replacement to prove that they were not totally prohibiting her from leaving Antipolo.

“As her employers, we are accountable. She’s already an adult. Whatever the consequences of her actions are, that’s it. But to us [her employer], the most we can do is to prevent her because of the lack of transportation,” Mae said.

On June 4, Mae said she was informed by Silvertino’s sister that they did not know that she had left Antipolo prompting her to text Silvertino.

Mae did not receive a reply until a police called her the next day to inform her that Mae had died.

“I hope she did not lie…She had very low self-esteem. But we did not expect that her self esteem was that low to the point that she would not consider her safety. Isang text lang sana, kahit hindi sa akin (I hope she had texted us, even not to me),” she said.

“What happened was depressing,” she added.

Earlier, news reports quoted street dwellers saying that Silvertino had told them that she walked from Quezon City to Pasay City.

“Kung sa napabayaan, napabayaan siya. They neglected our fellow Bicolano. The barangay or the police should have brought her to the hospital immediately,” he said.

A June 5 police report said the policemen intervened and brought Silvertino to the hospital as the barangay 159 personnel were not responsive.

“This tragedy is saddening. With Covid or not, she should have been given the right medical attention. No one from the barangay sought help for her or called the emergency personnel to isolate her or put her in a medical facility,” Sta. Ana added.

Sta. Ana, however, would not dismiss the fact her mother and sister had also said Silvertino had the habit of not telling others her true disposition.

“Silvertino lived her life as a solo parent. She was the type who did not want to disturb others,” he said, adding that it could be true she resisted help from the policemen.

Adrian Martinez of the Pasay City Youth Development Office, and chair of the committee on locally stranded individuals (LIS), also found it impossible for Mae to have walked from Quezon City to Pasay City without being noticed or assisted by the barangay or police.

“She should have obtained a travel pass first from Antipolo, Rizal otherwise she would not be allowed to travel,” Martinez said.

Martinez said they were able to inform Silvertino, through Jhimbo Mojica of the City Environment and Natural Resources Office, that she would undergo rapid testing on June 6 and ride the bus provided by Vice President Leni Robredo.

Mojica, who had intended to help her on June 3, posted her situation on Facebook on June 4 to solicit help from netizens so she could finally go home, and on June 5 to thank those who helped Silvertino and, also, to air his frustration over those who refused to help her when she was still alive.

Screenshot of messages courtesy of employer 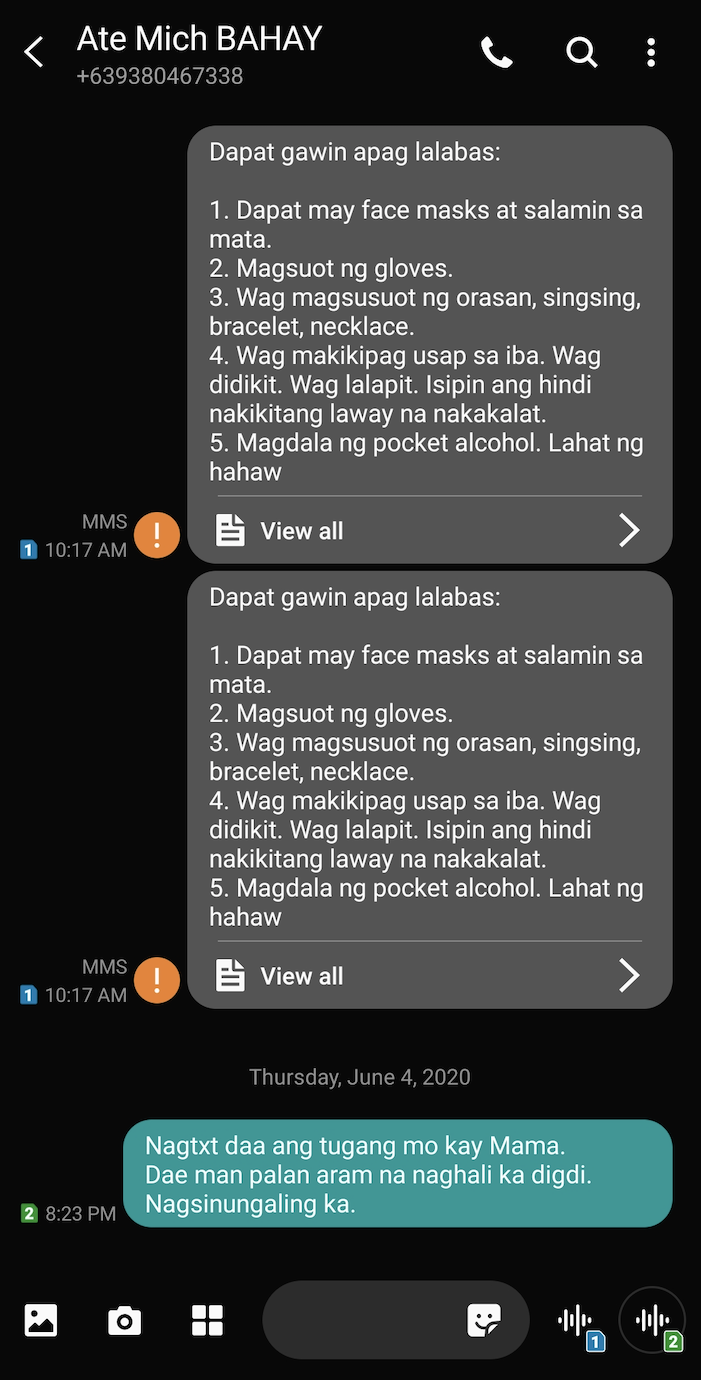 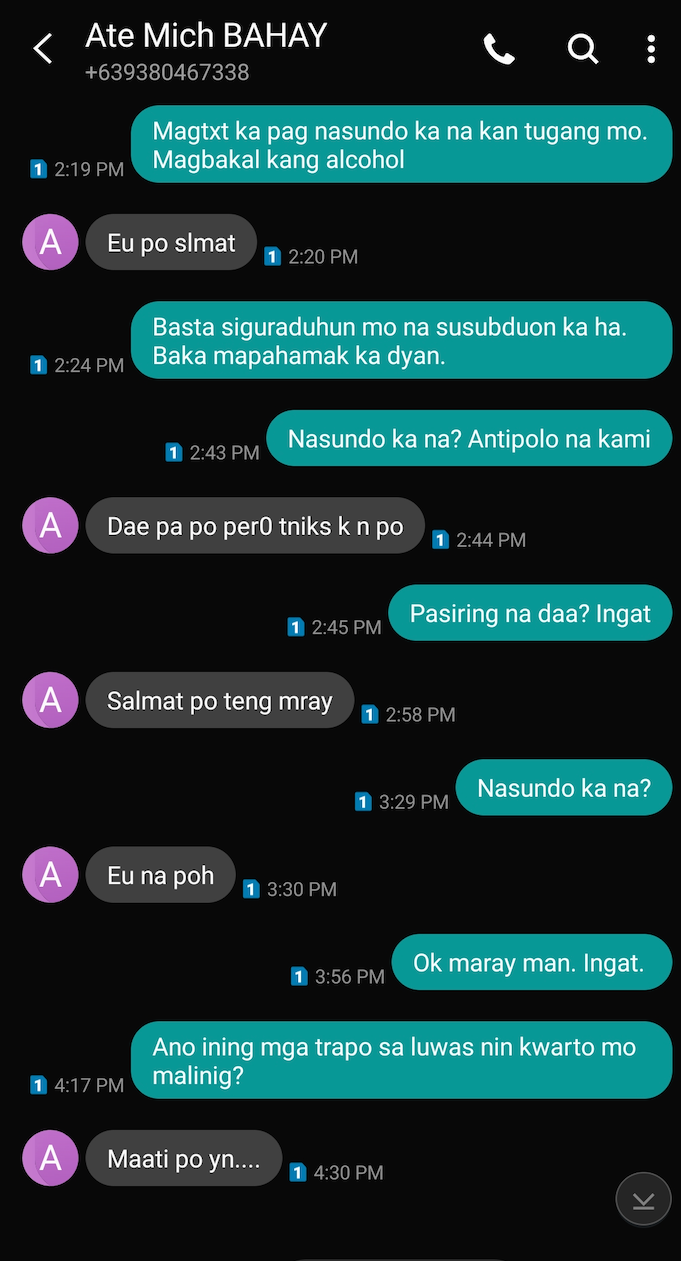 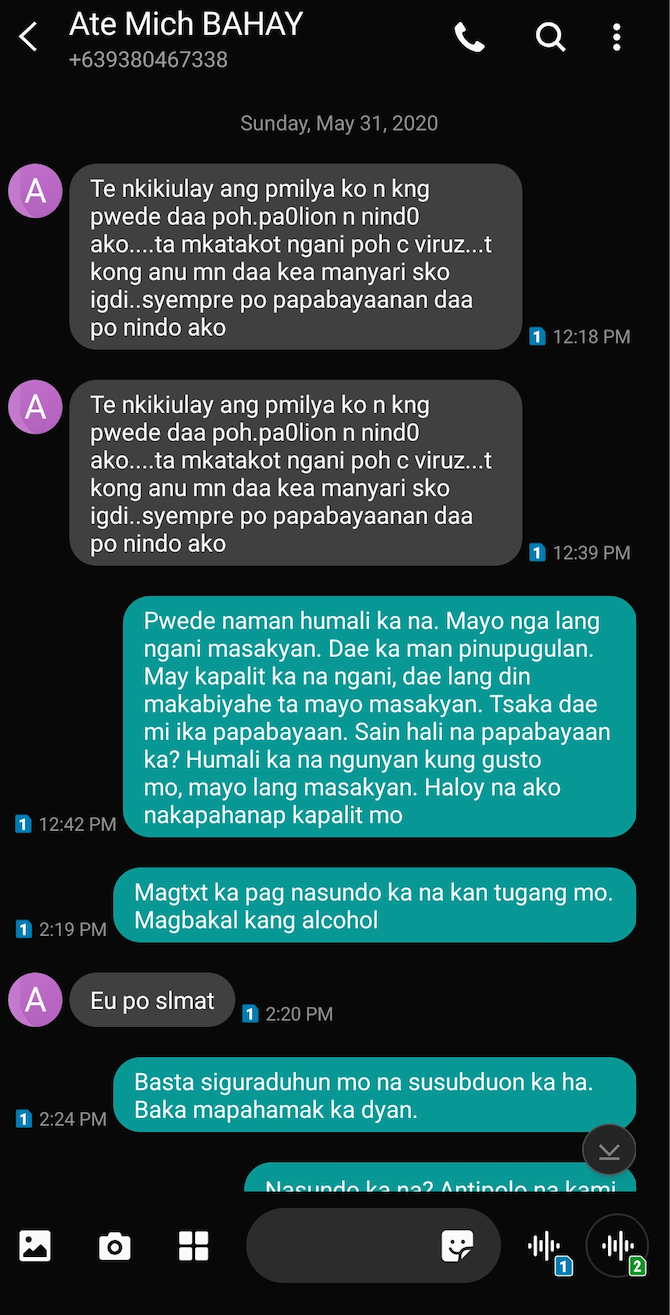