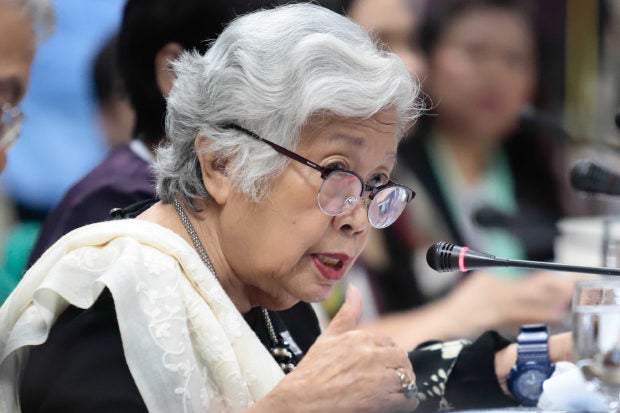 MANILA, Philippines — While admitting that the country could “never attain full readiness” in its shift to digital learning amid the pandemic, Education Secretary Leonor Briones said “education cannot wait” for the situation to return to normal.

During a Senate basic education committee hearing on Thursday, Briones told senators that the scheduled opening of classes on August 24 stands.

But it is important to note, she said, that classes will be conducted through distance and blended learning.

The DepEd secretary said that a final assessment will be made and reported to President Rodrigo Duterte by July 15.

The assessment will include the status of DepEd’s learning continuity plan as well as updates on enrollment numbers, among others, she noted.

“By July 15, our agreement in the Department of Education is we will make an assessment,—because by the time we already know the level of enrollment—then we will report to the President for his consideration,” she said.

“Because right now, we would have about 25 provinces who have been progressing very well in their anti-COVID efforts,” she added.

Basic education committee chair Senator Sherwin Gatchalian then asked Briones if there would be a possibility that face-to-face learning would be allowed in some parts of the country “assuming that the situation improves.”

In response, the DepEd chief said: “It is for the President to decide what we will do is to provide him with all the available information.”

This, in compliance with the President’s  previous pronouncement that he is not inclined to allow the resumption of classes without a COVID-19 vaccine.

“We’ll make a final assessment by July and we report to the President on the status, then he can make a decision for himself,” Briones went on.

Addressing concerns over the readiness of the country’s basic education system for the “new normal,” Briones said “we never can attain full readiness because the world is changing rapidly.”

“Knowledge is changing rapidly…Waiting until everything is corrected…by the time we have corrected the present problems, there will be future problems,” she said.

“As to the matter of readiness, when will we be ready? I’m not of the mind that the time will come when we will 100 percent be ready. By the time we are 100 percent ready, other problems and complications have come in. And changes will have come in again…Education cannot wait,” she added.

United Nations Children’s Fund Chief of Education Isy Faingold shared the same view as Briones, saying that there is “no right answer” to the question of when to open physical classes.

“We know that classes are starting on August 24 and the question remains on when is the best time to physically open the schools,” he said during the hearing.

“This is a question that all the governments in the world are asking themselves or have been asking themselves and there is no right answer for that. It would depend on the context of the situation, on the COVID-19 cases evolving and also having all the safety considerations in place,” Faingold added.

Briones was also not keen on postponing the opening of classes. She said it would cost P395 billion to compensate teachers for their paid vacation if they were to wait for one year before they can report back.

According to Briones, around 320,000 public school teachers have already been trained for ICT-based teaching.

“That is 38 percent already of the public school teachers of ICT-based teaching,” she said.

The DepEd secretary, meanwhile, said that the department is “seriously considering” coming up with a training program for parents to help them go about the shift to digital learning.

This, after Senator Nancy Binas proposed that DepEd also conduct training for parents who will be tasked to monitor their children’s learning progress.

“Not all parents…are also prepared to monitor and many of us have gone through the experience of not being able to tutor our children because the concepts that they are learning, the way they do Math is different from the way we did Math before,” Briones said.

“We are seriously considering that…I think that is sound advice which we will consider very seriously. Pero siguro we will not say training because some are insulted by the word ‘training.’ Maybe we can think of a nicer more elegant way of…the word now is upskilling yung para mabi-brief natin, mabigyan ng overview ang parents,” she added.

In a later message to reporters, Gatchalian said he was “satisfied” with the initial scheme under DepEd’s learning continuity plan.

“The Learning Continuity Plan (LCP) laid out what individual schools can use as a modality depending on the situation. The schools are very supportive of the LCP. But there are real problems: budget, assessment of the students and execution among others. That’s why school officials are strongly encouraged to work with their [local government units] to address specific problems,” he said.

“I’m satisfied with the initial plan under the LCP. But we will monitor the execution of the plan as it is being implemented,” he added.

As of Thursday morning, DepEd has recorded nearly 10 million enrollees nationwide, only eight days after enrollment for the upcoming school year started.

The enrollment period began on June 1 and will run until June 30.

DepEd has been preparing for blended learning, which is a combination of online distance learning and in-person delivery of learning materials to the homes of the learners, for the reopening of classes on August 24. Teaching with the use of radio and television will also be done for students who do not have access to a computer or the internet.