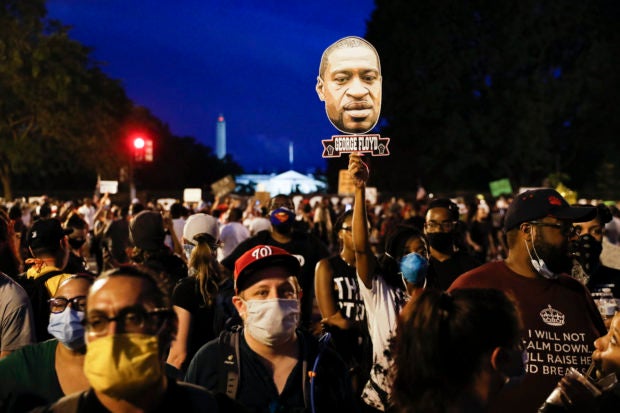 Demonstrators protest Saturday, June 6, 2020, near the White House in Washington, over the death of George Floyd. Image: AP/Jacquelyn Martin

A gym in Wisconsin, United States has drawn public ire for posting a workout called “I Can’t Breathe” in reference to the killing of George Floyd. His death has sparked mass protests across the country in the past weeks.

The workout ad, which was written on a whiteboard, was accompanied by a drawing of a man kneeling down on one knee, similar to how Floyd died in the hands of ex-officer Derek Chauvin.

It was posted inside Anytime Fitness branch in Wauwatosa, which citizens quickly condemned on social media. For one, Twitter user @cashewcruise shared a photo of the said workout on her account.

Anytime Fitness has since apologized for the incident and noted that they were “extremely disappointed to learn about the ‘I Can’t Breathe’ workout” promoted by the Wauwatosa branch.

“Under the Anytime Fitness franchise model, owners make independent decisions about local promotional activities for their gyms. However, regardless of their original intent, the actions of the Wauwatosa location were offensive, insensitive and inconsistent with our brand values,” co-founders Chuck Runyon and Dave Mortensen said in a statement published on the gym’s website.

“We understand the deep hurt that this gym’s actions have caused for many of our members, and we truly apologize that this happened,” they added.

The co-founders noted that the owner of the said franchise has taken full responsibility for the incident and that the employee who created the workout has been placed on leave while his employment status is under review.

They also pointed out that the franchise owner “and his entire staff” were the first to volunteer to participate in an anti-racism training that they announced last week.

“This experience has further galvanized our commitment to [anti-racism] education within our franchise network,” the company said. “To our employees, franchise owners, members and communities – especially those who are black, Indigenous, and people of color – we deeply regret today’s events, and we will continue to learn from these experiences. Our commitment to eliminating racism within our business is stronger than ever.” JB