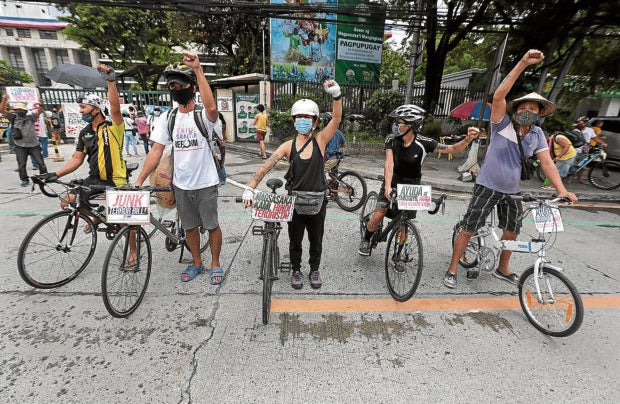 INDEPENDENCE DAY PROTEST Activists are planning an Independence Day protest against the proposed antiterrorism law, which they say violates civil liberties and can be used to crack down on critics of the government. The police say they could be arrested for violating coronavirus measures. —GRIG C. MONTEGRANDE

MANILA, Philippines — A senior Philippine National Police official on Wednesday warned activists that they could be arrested if they joined street protests against the proposed antiterrorism law, as Interior Secretary Eduardo Año reminded the public that mass gatherings were still disallowed under general community quarantine (GCQ).

“We still have a lot of (new coronavirus disease, or COVID-19) cases and we are still under GCQ. We still cannot do what we normally do,” Año said in an interview with GMA News TV.

Various groups had announced plans to stage a rally against the antiterrorism bill on Friday, Independence Day.

Año said there were other ways of voicing protest that would not violate health protocols meant to control the spread of COVID-19.

In an interview with UNTV, also on Wednesday, Police Lt. Gen. Guillermo Eleazar, the Joint Task Force COVID Shield commander, assured protesters that maximum tolerance would be observed by the police.

They would initially ask protesters to voluntarily disperse, he said. But if the protesters violate health protocols, Eleazar said, “We will be compelled to disperse them.”

“Arrests will come after we have exhausted maximum tolerance and they (protesters) insist. That’s disobedience and resistance already,” he pointed out.

The police dispersed a peaceful protest against the bill at the University of the Philippines (UP) Cebu last week, arresting eight protesters on campus.

Opponents of the antiterrorism measure say it could be used to suppress dissent, and violate civil and political rights.

The planned rally on Friday has been billed as a “mañanita” party to greet Philippine independence.

The use of the term, which is a traditional early morning serenade, is a swipe at the 55th birthday celebration of Metro Manila’s police chief Maj. Gen. Debold Sinas, who escaped sanctions from his superiors for alleged violations of quarantine rules.

Gen. Felimon Santos Jr., the Armed Forces of the Philippines chief of staff, told reporters the proposed law did not target any specific group or individual.

“But if any of them commits an act or acts which are included in the definition of terrorism, then they will be prosecuted and penalized under the proposed law,” Santos said.

In addition to human rights and political activists, opponents of the proposed law now include influential business associations and lawyers and religious groups.

The Congress of Teachers and Educators for Nationalism and Democracy (Contend) said its members and supporters would assert their right to protest and stage the Independence Day protest at the UP Diliman campus even though the Inter-Agency Task Force on Emerging Infectious Diseases (IATF) limited mass gathering to 10 people.

“There’s no law saying that protests are illegal. The IATF guidelines are only guidelines; it is not law. Our civil and political rights are not suspended. We need to assert that,” Contend said.

Another group that announced it would join Friday’s rally, Nagkaisa labor coalition, urged Mr. Duterte to veto the “unconstitutional” bill.

Nagkaisa chair Sonny Matula said the bill violated the separation of powers provision in the Constitution.

“[It] authorizes the executive department to usurp the power of the judiciary. Specifically, a mere administrative order, issued by the would-be created Anti-Terrorism Council, may be used to arrest and detain people on the basis of mere suspicion alone,” Matula said.

Presidential spokesperson Harry Roque said the public’s sentiment would not be set aside by Malacañang even though the President had certified the bill as urgent.

“Let’s just say that the public interest on the bill will make the President review the provisions of bill even closer,” he said in an interview with ABS-CBN News Channel.

The House of Representatives approved the antiterror bill on third reading on June 3, but just days later some members withdrew their “yes” votes or changed them to “abstain.”

A House leader on Wednesday told the Inquirer the votes could no longer be retracted and those who “were obviously pressured by social media” to change their minds should quit their committee chairmanships and other plum posts out of respect for the majority coalition.

“No member was asked or forced to vote ‘yes.’ It was a conscience vote and choice for everyone; however, if it’s in your conscience to oppose the measure, you should also have the conscience to resign from your leadership position,” said Deputy Speaker Luis Raymund Villafuerte Jr.

Villafuerte, a principal author of House Bill No. 6875 which had adopted the Senate version approved in February, chided his colleagues who were “only doing this for public consumption.” He did not mention any House member.

Deputy Speaker Loren Legarda was the highest-ranking House leader to disclose voting “no.” She was erroneously identified as a coauthor of the bill.

“I respect the position taken by my colleagues. That’s democracy,” Legarda told the Inquirer.

Muntinlupa Rep. Ruffy Biazon, who withdrew as the principal author of the bill and voted against it, is vice chair of the powerful House appropriations panel, as well as of the House national defense and security committees.

Albay Rep. Joey Salceda, who retracted his yes vote and wanted it changed to an abstention, chairs the House ways and means committee. Salceda did not immediately respond to the Inquirer’s request for comment.