Rappler’s Maria Ressa scared but strong ahead of verdict 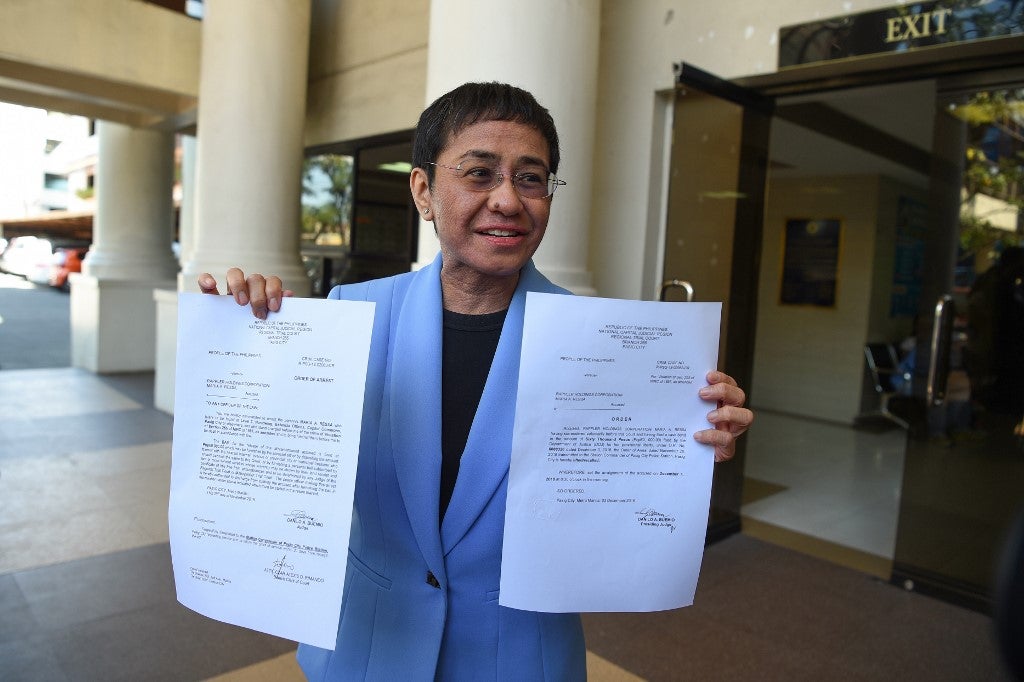 This file photo taken on December 3, 2018 shows Maria Ressa, CEO and executive editor of online portal Rappler, showing the warrant of arrest order after posting bail at a court in Manila.  (Photo by Ted ALJIBE / AFP)

MANILA, Philippines — High-profile Philippine journalist Maria Ressa says the libel charge that could see her jailed next week is a government ploy to intimidate all critical voices, but she refuses to be silenced and still holds out hope of winning.

In an exclusive video interview with AFP ahead of Monday’s verdict that could see her sentenced for up to 12 years, Ressa admitted being scared but also continued to speak defiantly.

“I’ve been the cautionary tale: be quiet or you’re next… that’s part of the reason why I have been targeted,” said Ressa, 56, the co-founder of news site Rappler and a former CNN journalist.

“It’s a chilling effect… not just to me and to Rappler, but to journalists and to anyone who asks critical questions.”

Monday’s verdict will decide a case that stems from a businessman’s complaint in 2017 over a Rappler story five years earlier about his alleged ties to a then-judge on the nation’s top court.

Authorities say they have not targeted Ressa for her work and are simply enforcing the law.

But press and media watchdogs say the case against Ressa is in retaliation for Rappler’s independent reporting on President Rodrigo Duterte and his administration.

The website’s journalists have cast a harsh light on Duterte’s anti-drugs crackdown, which has killed thousands and drawn international censure despite being backed by many Filipinos.

Another one of the most prominent critics of Duterte’s narco war, Senator Leila de Lima, has been in jail for three years over drug allegations that she says are trumped up.

Ressa’s libel case is among a string of criminal charges that have hit her and Rappler since last year, many of which stem from allegations over how the site raised investment money.

The multiple moves against Rappler have drawn international concern and made Ressa a cause celebre globally for people standing up against authoritarian governments.

Time magazine named Ressa a Person of the Year in 2018.

Rights watchdogs say the Duterte government has in recent weeks stepped up its campaign to silence dissent in other ways, with the nation’s top broadcaster — ABS-CBN — shutdown.

Lawmkers also this month passed the Anti-Terrorism Act of 2020, which allows warrantless arrests, weeks of detention without charge and other measures that critics fear could be used to crack down on peaceful government opponents.

Ressa said Duterte had cemented himself as the most powerful Filipino leader since dictator Ferdinand Marcos, whose two decades in power ended in a famous “people power” uprising in 1986.

“We could even say more powerful than Marcos because he (Duterte) was able to declare martial law without even declaring martial law,” Ressa said, referring to the Anti-Terrorism Act.

Ressa, who served as CNN’s bureau chief in Manila and Jakarta during a nearly 35-year career, said waiting for Monday’s verdict was proving an emotional challenge.

“I am going to embrace my fear. I have to be ready and that starts in my head. That starts with my ability to be okay with the worst-case scenario,” she said from her Manila home.

“I don’t want to be surprised.”

The independence of the judicial system in the Philippines, which has long had a reputation for corruption, has been further eroded during Duterte’s four years in power, according to rights groups.

But Ressa said individual people who make up the court system and their desire “to be guided by the spirit of the law” still give her reason for optimism.

Regardless of the pressure from the highest levels of power to convict, it is up to the judge to make the final decision.