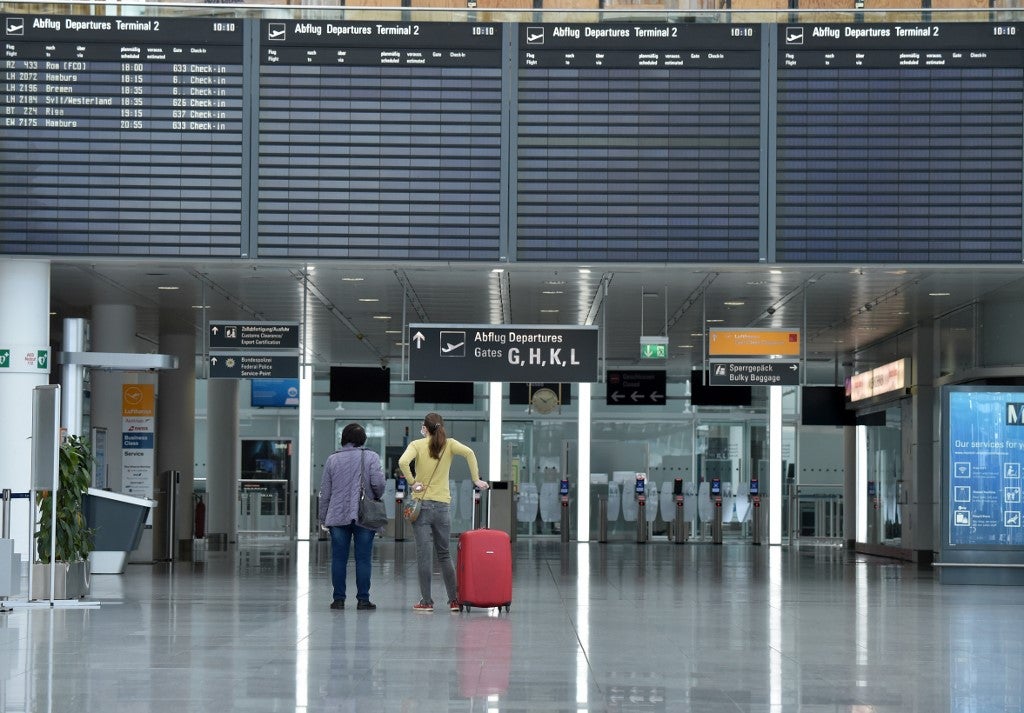 Passengers walk under a board in an empty terminal of the German airline Lufthansa at the “Franz-Josef-Strauss” airport in Munich, southern Germany, on June 3, 2020 amid the new coronavirus pandemic. (Photo by Christof STACHE / AFP)

FRANKFURT AM MAIN, Germany — Cabin crews on standby with destinations revealed only hours before the flight, pilots put on simulators to keep up to date — an airline restarting after the pandemic is a far cry from the clockwork precision of the pre-coronavirus world.

As borders slammed shut to halt virus transmission, about 90 percent of passenger connections at the German airline fell away, leaving an “emergency” timetable comparable to the 1950s.

With the peak of the crisis over in Europe, the airline is plotting its restart — and the entire operation has been forced to act more nimbly to cope.

For Lufthansa crews, the inch-by-inch progress means “they have almost no fixed shifts any more, only on-call periods”, Spohr said.

“They know how quickly they have to make it to the airport and that they should be nearby, and then they get a few hours’ notice about where they’re going.”

“Methods we’ve always used to patch over problems have become the standard,” he added.

Some flights, like the first India-bound service, have been dropped almost at the last moment for lack of landing authorisation.

At the same time, “demand is far less predictable than usual”, a spokesman for Abu Dhabi-based Etihad Airways said.

At Lufthansa, there have been cases where “colleagues all at once had to add a second flight in parallel” to meet high demand — including on a busy May holiday weekend when “I myself and our family” were on a waiting list, Spohr said.

“Historic data we’ve gathered over decades are useless for flight planning in the near future,” said chief financial officer Thorsten Dirks, explaining that Lufthansa’s “artificial intelligence has to be re-trained” to address the altered situation.

“In these cases, human beings are faster and more flexible.”

Flight and cabin crew on standby through the period must also be kept up to date.

Some pilots have been flying simulators to stay in touch, with Etihad running courses every 45 days as 80 percent of its fleet was grounded in April.

Meanwhile other airlines like Senegal’s Transair have been operating empty flights to maintain pilots’ licences.

Around 700 of Lufthansa’s 763 aircraft were grounded at the peak of the lockdowns, parked in orderly rows on the apron of Frankfurt airport — and even taking up one of the runways.

After up to three months of inactivity, planes “can be reactivated in one or two days”, Lufthansa spokeswoman Lara Matuschek said.

Any longer time out means placing them into “deep storage”, with steps like antibacterial treatments for the empty fuel tanks.

“There are much higher hurdles to reactivation” from deep storage, and “it can take up to four weeks” as more extensive maintenance work may be needed, Matuschek explained.

From early June, the German juggernaut has been offering more routes, aiming to serve 90 percent of short-haul and 70 percent of long-haul destinations by September.

But it will only offer around 40 percent of its usual capacity and has been forced to turn to Berlin for a nine-billion-euro ($10.1 billion) bailout.

In Asia, Singapore Airlines expects “two days to a week” to reactivate aircraft.

The carrier will offer 12 additional destinations in June and July, but its network remains pared back with just 32 of its normal 135 routes and six percent of pre-pandemic capacity.

In Japan, a gradual journey back to normal has begun for JAL and ANA, with the latter offering 30 percent of normal flights in June after 15 percent in May.

Emirates, the biggest Middle Eastern carrier, expects a return to normal traffic levels to take up to four years.

Meanwhile, Lufthansa’s call centres have been burdened with cancellations and re-bookings, with reimbursements alone running into hundreds of millions of euros per month.

“The more we bring the system back online, the more efficient we have to become,” Spohr said.

“But you can’t work this way long-term in a company our size and hope to make money.”