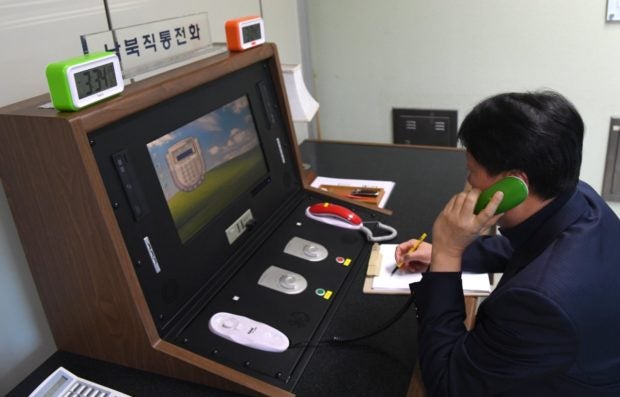 SEOUL — South Korea will not attempt to call North Korea via a liaison communication line until its operation returns to normal, the unification ministry said Wednesday, after Pyongyang apparently severed cross-border phone lines in anger over anti-Pyongyang leaflets.

On Tuesday, North Korea called the South an “enemy” and vowed to cut off all inter-Korean communication lines in anger over anti-Pyongyang leaflets sent from the South. It has since not answered routine daily phone calls from the South via liaison and military hotlines.

“Our call at noon yesterday went unanswered. We have not made more attempts ever since,” Yoh Sang-key, the ministry’s spokesperson, said during a regular press briefing. “We will not try to call every day going forward until there is an agreement to resume the operation of inter-Korean communication lines.”

North Korea’s decision to sever all communication lines between the two Koreas came days after Pyongyang threatened to abolish an inter-Korean liaison office and completely shut down other major cross border programs, denouncing leaflet-sending as a hostile act breaching a series of peace agreements between the two sides.

The two Koreas opened the liaison office in the North’s border town of Kaesong in September 2018 as part of efforts to facilitate cross-border exchanges and cooperation by keeping a communication channel up and running around the clock.

They had stationed liaison officers and staff members there until early January, but the office was temporarily closed in early January amid concerns over the coronavirus.

They, instead, opened new telephone and fax lines between Seoul and Pyongyang through which they had made routine contact twice a day mostly to ensure their normal operation. Yonhap