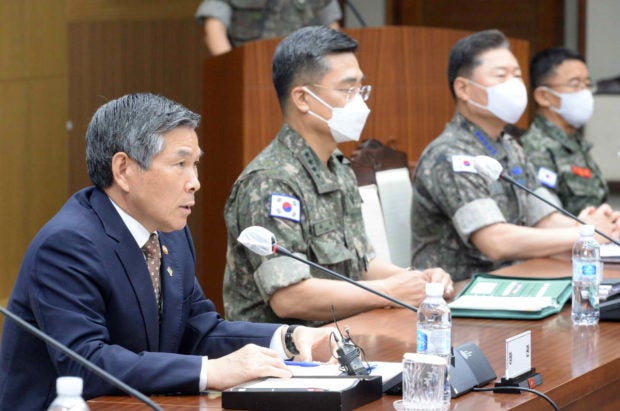 During a meeting of top commanders presided over by Defense Minister Jeong Kyeong-doo, officers said the agreement signed in 2018 has “specifically and practically” contributed to reducing tensions between the two Koreas, according to the ministry

“Despite the recent difficulty in inter-Korean relations, our military decided to fully implement the Sept. 19 military agreement to continue efforts for realization of reduction in military tensions, and to militarily back the government’s policy for denuclearization of the Korean Peninsula and the peace process,” the ministry said in a release.

Kim Yo-jong, the powerful sister of North Korean leader Kim Jong-un, threatened last week to scrap the deal and to halt other cross-border projects in anger over Seoul’s failure to stop North Korean defectors from sending anti-Pyongyang leaflets across the border.

On Tuesday, the North cut all communication lines with South Korea, citing the activists’ leaflet campaign, and said it is working on “phased plans” to now deal with the South as an “enemy.”

Referring to the North’s recent missile launches and warnings, Jeong said Pyongyang is blaming Seoul for strained inter-Korean relations when it is the one ratcheting up tensions on the peninsula.

“North Korea is criticizing our military’s routine exercises and defense buildup, shifting the blame for the strained inter-Korean relations to us … while heightening military tensions,” he said.