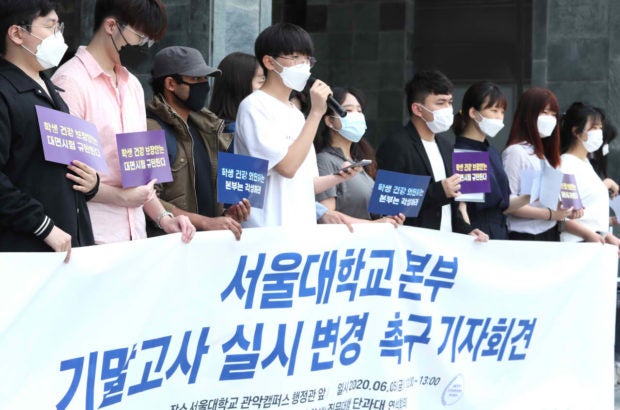 SEOUL — After delivering virtual lessons for the entire spring semester due to the COVID-19 outbreak, South Korean universities are agonizing over how to hold their final exams — whether it should be in person or online.

Many universities and professors prefer having the students physically present on campus for the assessments to prevent cheating.

Nearly 100 medical students at Inha University recently confessed to cheating during online exams by sharing answers in person or via phone and messenger services.

Suspected cases of group cheating in tests were also found in other universities such as Konkuk, Sogang, Yonsei and Hanyang.

Nevertheless, students generally prefer online exams or reports as cluster infections continue, with some taking action against their schools over the issue.

Seoul National University has left it to the professors’ discretion, but students are strongly demanding that all exams are conducted online.

Student presidents of colleges at SNU held a press conference last week to insist that students’ health rights must not be infringed upon with on-campus assessments.

In a survey of 1,800 students, 83 percent said in-person exams were not safe, according to the SNU student presidents.

Hanyang University made it a general rule to have the finals on campus, only to face a strong backlash from students who began an online signature-gathering campaign and visited the school president’s office to protest.

A 27-year-old senior year student majoring in business at Hanyang University said: “There isn’t a single person I know who wants the finals to be administered on campus. … The virus is still spreading, and what if I catch it by going to school to take the exam?”

If the school is worried about cheating, it could replace the tests with assignments like it did for the mid-terms, said the student who wished to be identified only by his surname Kim.

Students say in-person exams will bring a lot of students on and around the campus, which will lead to lax social distancing and increased risks of the virus spreading.

“Students come from all regions, and this makes in-person exams risky,” said Song Hee-jeong, an English major at Sookmyung Women’s University who will take at least one of her six final exams on campus.

Professors of the five other courses have not decided yet on how to conduct the tests.

Sungkyunkwan University plans to use a video conference system called Webex to identify and monitor the test takers.

Dongguk University holds the online tests at a given time to prevent proxy test takers, and checks on the students’ faces during the exams using webcams.

Some professors conduct open-book tests online that need to be completed in a short period of time.

Yonsei University decided that while online tests are the general rule, in-person exams can be administered if all the students taking the course agree to it.

Sogang University and Sungkyunkwan University recommended professors to conduct the finals online, with the exception of lab and practical training courses.

Sungshin Women’s University, Sejong University and the University of Seoul also decided to have the exams online unless the professor submits a letter explaining that a virtual test is not feasible.

Hankuk University of Foreign Studies initially planned to have the finals on campus, but changed its policy to let the professors decide as the infections showed an uptick.

Korea University notified students that online tests will not be an option unless strict proctoring is possible.

Hongik University already began the finals in person, with the tests staggered over a month in a bid to keep the virus from spreading.