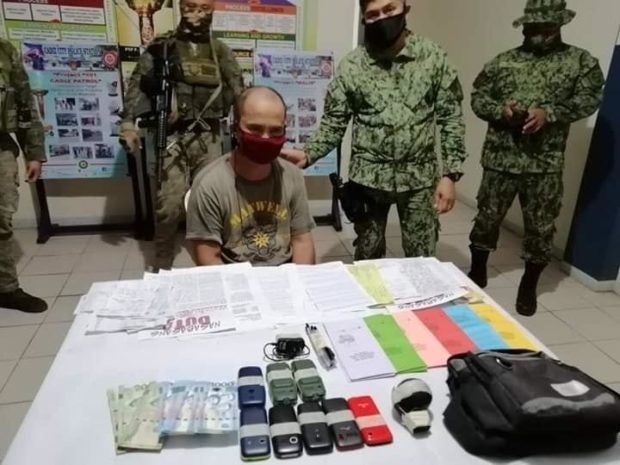 Police present Gaspar Davao and the alleged items recovered from him following his arrest on Tuesday, June 9. CONTRIBUTED PHOTO

BACOLOD CITY –– A labor leader, who allegedly served as a high-ranking official of the Northern Negros Front of the Communist Party of the Philippines-New People’s Army, was arrested in Barangay Caduha-an, Cadiz City around 7 p.m. on June 9.

Gaspar “Aldong” Davao, 55, a resident of Barangay Pinapugasan, Escalante City, was on board a public utility van when arrested by joint elements of the Cadiz City police and the 79th Infantry Brigade for allegedly violating the Cadiz City ordinance requiring the wearing of face masks, he said.

Lt. Col. Robert Mansueto, Cadiz City police chief, said Davao alighted from the vehicle and prodded policemen to arrest and subdue him while allegedly trying to draw a fragmentation grenade from his sling bag.

Upon verification from the Armed Forces of the Philippines Davao, Mansueto said they found out that Davao was identified as the Northern Negros Front White Area secretary and finance office.

But the Bagong Alyansang Makabayan or Bayan Negros said Davao is not a rebel but a labor leader of the National Federation of Sugar Workers in northern Negros Occidental.

Bayan said Davao was on his way home from a Bayan meeting in Bacolod City when arrested.