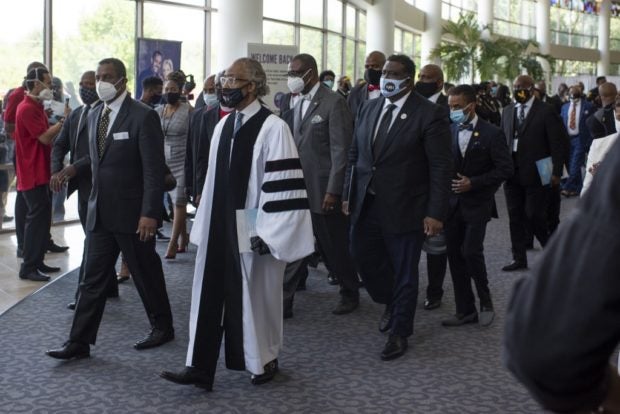 The Reverend Al Sharpton walks out of the Fountain of Praise church after George Floyd’s funeral on June 9, 2020 in Houston, Texas. Floyd will be laid to rest Tuesday in his Houston hometown, the culmination of a long farewell to the 46-year-old African American whose death in custody ignited global protests against police brutality and racism. Photo by Mark Felix / AFP

HOUSTON, United States — A civil rights leader at Tuesday’s funeral for George Floyd, whose death in custody sparked worldwide protests, accused US President Donald Trump of “wickedness” for cracking down on demonstrators instead of police brutality.

Reverend Al Sharpton also told the service in Houston that Trump’s efforts to stop the protests with force, including the use of rubber bullets, rather than seek justice for abused citizens suggests Trump is signalling to police officers that they are above the law.

“We are fighting wickedness in high places!” Sharpton thundered, uttering the phrase repeatedly as he accused Trump of “scheming on how you can spin the story rather than how you can achieve justice.”

“You take rubber bullets and tear gas to clear out peaceful protesters and then take a Bible and walk in front of a church and use a church as a prop? Wickedness in high places,” Sharpton said.

As funeral attendees applauded, Sharpton berated the president for failing to directly address how a Minneapolis policeman pressed his knee against a handcuffed Floyd’s neck for eight minutes and 46 seconds until well after Floyd’s body went limp.

Trump did phone the Floyd family to offer his sympathy, and he has described the 46-year-old’s death as a “terrible thing” that “should never have happened.”

Sharpton stressed the presidential response has been insufficient.

“What about the human right of George Floyd?” he said. “The signals that we’re sending is that if you are in law enforcement, that the law doesn’t apply to you.”

Sharpton noted what many protesters have spoken out about in the weeks since Floyd’s killing, that systemic racism is pervasive and needs to be addressed.

“We are not fighting some disconnected incidents. We are fighting an institutional systemic problem that’s been allowed to permeate since we were brought to these shores,” Sharpton said, invoking the four-century legacy of slavery in America.