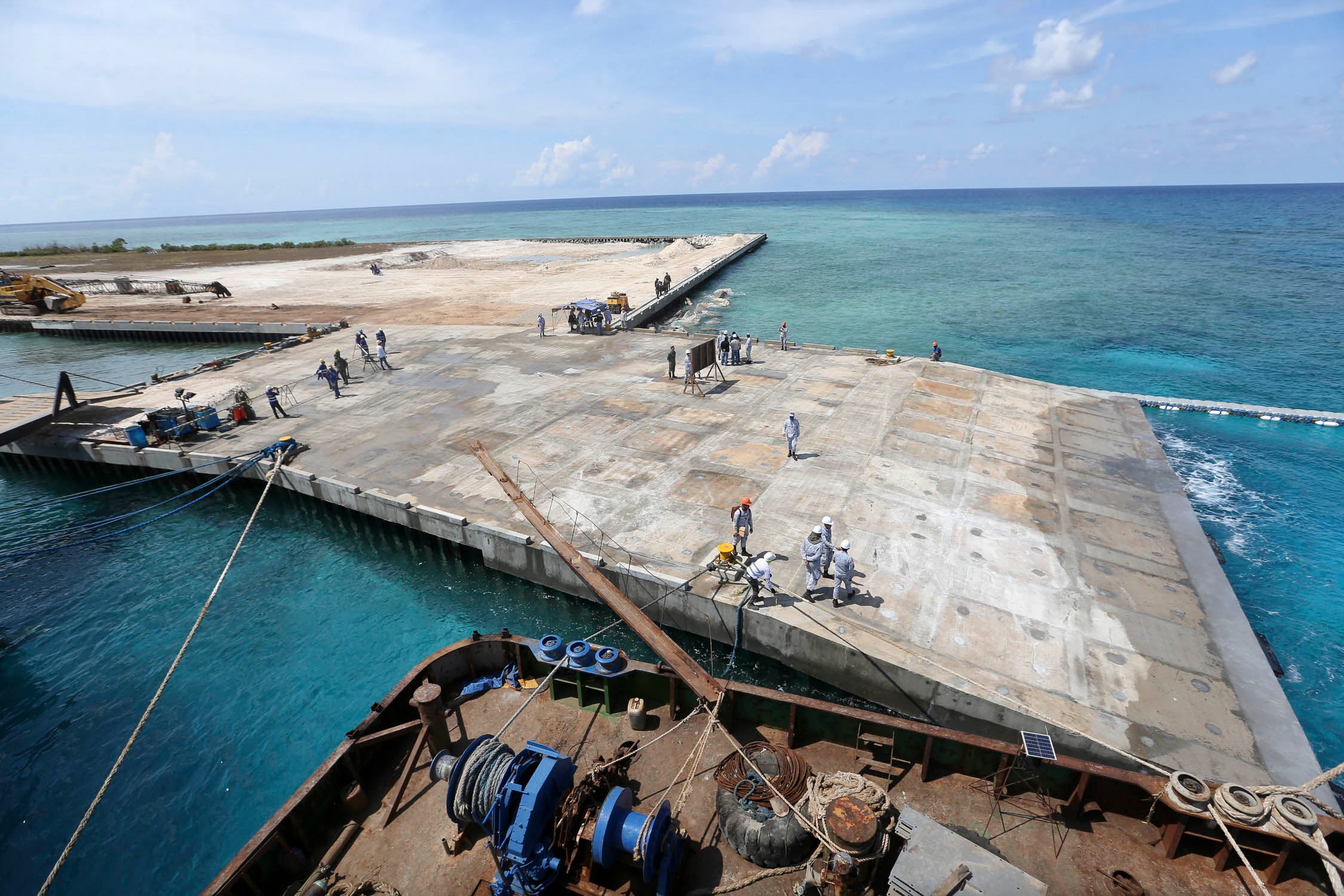 Navy personnel on the new beach ramp of the AFP Basing Support System Project Phase 1 in Pag-asa Island, Kalayaan Group of Islands, Palawan. The winning proponent/constructor of Phase 1 is Luzviminda Engineering and its project administrator is the Philippine Navy Combat Engineering Brigade or the SEABEES. On the upper left corner is work being done for Phase 2. INQUIRER PHOTO/LYN RILLON

MANILA, Philippines — The Department of National Defense (DND) on Tuesday formally received from a private contractor the newly completed P268-million beaching ramp on Pag-asa Island, a major improvement intended to speed up the transport of cargo to the country’s largest outpost in the West Philippine Sea.

Reiterating a previous statement, Defense Secretary Delfin Lorenzana said the completion of the ramp should not be construed as a move by the Philippine government to “militarize” Pag-asa.

But he said the ramp, a project contracted to Luzviminda Engineering Co. and designed for “roll-on, roll-off’’ sea vessels, would “revitalize the community and strengthen Filipino presence’’ in the West Philippine Sea.

A part of the Kalayaan group of islands, Pag-asa is officially listed as the municipality of Kalayaan under the jurisdiction of Palawan province.

On the sidelines of Tuesday’s turnover rites, Lorenzana said the project was “very significant” as building materials and heavy equipment could now be brought into Pag-asa with ease, especially for maintenance of the island’s airstrip and the construction of other facilities for its civilian inhabitants numbering around 200.

Without the beaching ramp, large vessels could not go near the island and could bring in supplies only by small boats.

“So it’s very tedious and very expensive and we can only do that during calm weather,” he noted.

“The purpose of this (beaching ramp) is to just develop this area into a viable community,’’ he said.

“We will not field heavy weapons. We will not militarize this [island],” the defense chief stressed. “We have troops here but they are armed with small arms, for their [personal] protection as soldiers.’’

But he pointed out that the Kalayaan island chain played a “strategic role in reconnaissance missions and exploration activities.”

Construction of the ramp began in November 2017 as the first phase of the Philippine military’s “basing support system project.”

Phases 2 to 4, which are estimated to cost P1.3 billion, would involve airstrip repairs and other improvements, including an aircraft parking apron; construction of soldiers’ barracks, community housing and an FM radio broadcasting center; and power generators.

Lorenzana said beaching ramps could also be constructed in other parts of the Kalayaan group, including Rizal Reef and Lawak and Patag islands.

“It is still under study because these (other areas) are too far and too small,” he said.