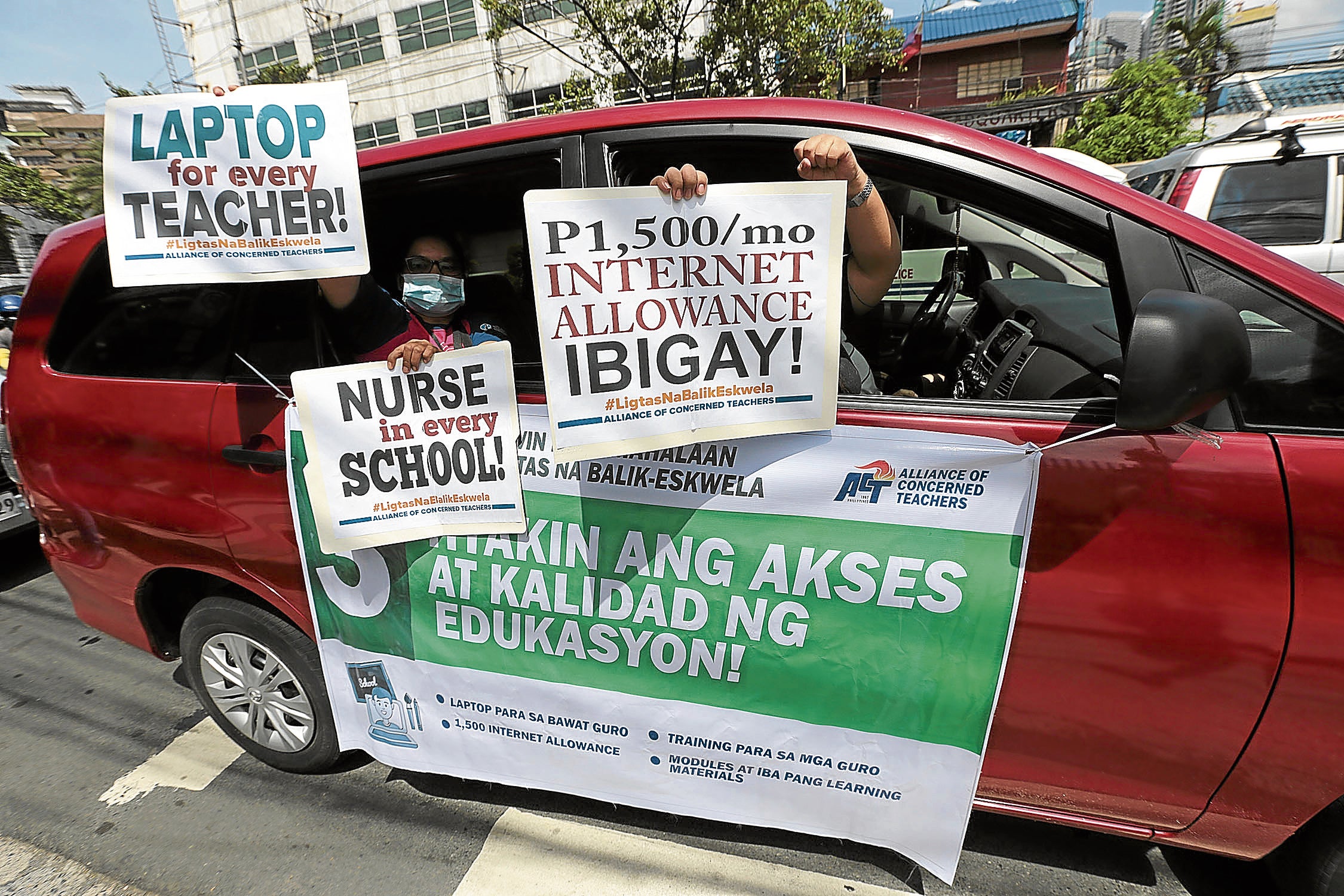 INTERNET ALLOWANCE, LAPTOP FOR TEACHERS In a drive-by protest at the Department of Education main office in Pasig City, the Alliance of Concerned Teachers demands, among other things, that public schoolteachers be granted an internet allowance of P1,500 a month and a laptop so they can handle distance-learning classes. Another group, the Teachers’ Dignity Coalition (TDC), is seeking an internet allowance of at least P1,000. —GRIG C. MONTEGRANDE

MANILA, Philippines — Twenty-one private schools are interested in a “study now, pay later” program aimed at ensuring the continued formal education of students despite the pandemic, according to President Rodrigo Duterte.

In his 11th report to Congress on Monday, the President said the schools were willing to avail themselves of the Access to Academic Development to Empower the Masses Toward Endless Opportunities (Academe) program of Land Bank of the Philippines (Landbank).

A loan application worth P250 million for these schools was awaiting the approval of the Landbank board, he said.

The Academe lending program allocates P3 billion in credit support for private high schools, private technical-vocational education training institutions, colleges and universities. It was launched in May at the height of the lockdown due to COVID-19 to ensure that students could stay in school despite economic difficulties.

The President has appealed to private schools to allow the staggered payment of tuition in light of the economic effects of the pandemic.

At the Department of Education (DepEd) on Tuesday, public school teachers continued to voice concerns over the incoming school year.

The Alliance of Concerned Teachers (ACT), the country’s largest teachers’ union, protested at the gates of the DepEd Central Office in Pasig City, decrying what it said was a remote learning program that would further restrict poor children’s access to education.

“Instead of taking the opportunity to close the many gaps in education access and quality, the government opted to widen it by insisting on opening schools remotely without sufficient preparation and support to its constituents,” said ACT secretary-general Raymond Basilio.

The DepEd said in a statement on Monday that it concurred with Duterte’s ultimatum that no in-person classes be held until a vaccine for COVID-19 is developed. It insisted, however, that the school year still open on Aug. 24.

It has proposed various alternatives to in-person classes, including online courses, self-taught modules and instruction delivered through television and radio.

Another group of public school teachers, the Teachers’ Dignity Coalition (TDC), urged the DepEd to grant teachers an “internet allowance” of at least P1,000 as they grapple with remote instruction.

“With this drastic change in teaching and learning approaches, our teachers will need to upgrade their technological capacity and digital access,” said Ildefonso Enguerra III, president of TDC Metro Manila chapter.

“[The] DepEd may consider the provision of gadgets like laptop computers,” Enguerra said

The department has said teachers should tap into their regular P3,500 cash allowance for expenses related to online teaching.

“That amount is only equivalent to P16 a day, but it would certainly help our teachers. But again, with online tasks continuously growing, we may need more funds to cope,” he said.

ACT Teachers also pointed to enrollment data from the first week of June — the start of a monthlong online enrollment period — as a sign of widening education inequalities, saying about half of the enrolled students were from larger, more urban regions.

“Teachers and parents’ distress about class opening is based on concrete problems with school and community safety, infrastructure availability, access and quality, and economic limitations — which the government is duty-bound to resolve,” Basilio said.