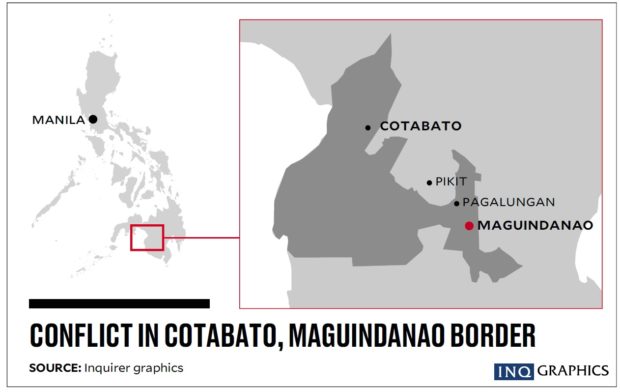 COTABATO CITY, Maguindanao, Philippines — Fighting broke out anew between two families at the border of Maguindanao and Cotabato provinces on Sunday, displacing thousands of people and raising cries for help.

“We are afraid of bullets; we might get hit in the crossfire. But here in the evacuation center, we are afraid of the coronavirus,” said Kagi Ulanin, an evacuee staying at the National Irrigation Administration compound in Pikit town, Cotabato.

‘Where are our leaders?’

“We need help, life here is so difficult,” Ulanin said in Filipino. “Not all are using face masks here, so, if a [virus] carrier comes in, all of us would get infected. It would be a disaster.”“This is not the first time [that this happened], this keeps [happening] again and again,” said farmer Sindatuk Kasan, 49, who left his home in Pikit’s Barangay Gli-Gli to seek refuge in the town’s Barangay Takepan. “Where are our leaders? This [problem] is recurring, [why can’t] they find solutions.”They were among the 300 families, or around 1,500 individuals who fled their homes on Sunday after the fighting started again between the group of Commander Ricky Hussein of the Moro Islamic Liberation Front (MILF) and Commander Butch Sanday’s band of armed men in Pikit’s Barangay Talitay, said Police Col. Henry Villar, Cotabato provincial police director.

Villar said Hussein and Sanday had been locked up in a violent feud since 10 years ago when both their families started claiming vast tracts of land in Talitay near the border of Pikit, Cotabato and Pagalungan town in Maguindanao.

Neither of them, however, could produce legal documents to support their claims, Villar said.

With the new wave of evacuees, mostly women and children, the number of displaced people has reached more than 12,000 since the fighting began in April, according to the Pikit Municipal Disaster Risk Reduction and Management Office.

Earlier, 2,611 families or 10,829 people left their villages in Pikit and Pagalungan because of the fighting. They have yet to return home.

Ulanin said this was not what he expected after his village of Barungis voted to join the Bangsamoro in a plebiscite last year.

“There were promises of peace if our village joined the BARMM (Bangsamoro Autonomous Region in Muslim Mindanao),” he said, referring to the plebiscite to ratify the Bangsamoro Organic Law which would govern the Bangsamoro.

“We did join last year, yet peace remains elusive,” he said.

Barungis was among the 22 Moro-dominated villages in Pikit which joined the BARMM. Hence, they should be administratively separated from the municipality of Pikit.

Cotabato Board Member Dulia Sultan said the epicenter of “rido” (clan war) were the villages of Nunguan, Barungis and Balatican.

“People fled when conflict erupted two months ago and have not returned since then,” Sultan said.

Pikit Mayor Sumulong Sultan said aid had been extended to the displaced families.

“We thought peace would already reign in the area after the villages’ inclusion in the BARMM but I was wrong,” Sultan said. “Still, I am optimistic it will be over soon.”

Lt. Col. Edgardo Vilchez Jr., speaking for the local military, said Army soldiers had been sent to areas where the fighting broke out to prevent any spillover of hostilities and to allow the MILF-government ceasefire mechanism to work. INQ