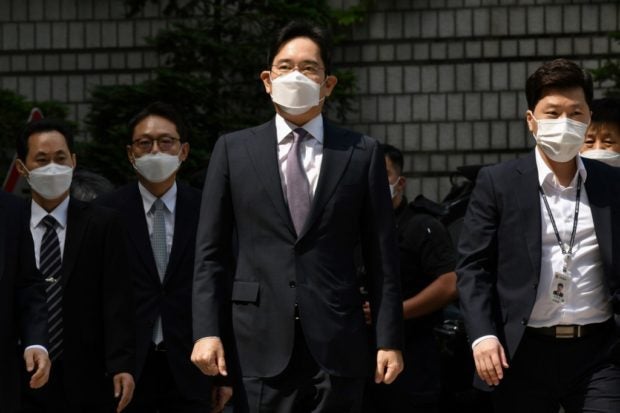 Samsung heir Lee Jae-yong (C), vice chairman of Samsung Electronics, arrives at court for a hearing to review the issuing of his arrest warrant over a controversial merger of two Samsung units, at the Seoul Central District Court in Seoul on June 8, 2020. Photo by Jung Yeon-je / AFP

SEOUL — A South Korean court on Tuesday declined to issue an arrest warrant for the heir to the country’s Samsung empire over a controversial merger of two business units seen as a key step to his succession.

Lee Jae-yong, vice chairman of Samsung Electronics, is already being re-tried on charges of bribery, embezzlement and other offenses in connection with a corruption scandal that brought down former South Korean president Park Geun-hye.

The merger case is separate from his ongoing retrial, but adds to the difficulties for the Samsung group, by far the biggest of the family-controlled conglomerates, or chaebols, that dominate business in the world’s 12th-largest economy.

Prosecutors had sought the arrest warrant for Lee on suspicion he was involved in price manipulation and illegal trading during the 2015 merger of Cheil Industries and Samsung C&T.

But the Seoul Central District Court turned down the prosecution’s request, ruling there was not sufficient probable cause for his arrest or those of two former Samsung executives.

“There was insufficient explanation on the need to arrest the defendants against the principle of trial without detention,” Judge Won Jung-sook said in a court statement.

“Prosecutors seem to have already secured a considerable amount of evidence through their investigation,” she said.

Whether Lee committed illegal acts should be established at trial, she added.

Lee attended the hearing, which Yonhap news agency said lasted for about nine hours, and then awaited the court’s decision at a detention centre. He emerged at about 2:40 am Tuesday and briefly greeted reporters but did not answer when asked how he felt about the decision.

Lee then left in a black sedan.

The merger transaction was seen as helping ensure a smooth third-generational power transfer to Lee, a scion of Samsung’s founding family.

Chaebol families often have only a small ownership stake in their empires, but maintain control through complex webs of cross-shareholdings between units.

Lee was the largest shareholder in Cheil Industries, and critics say Samsung sought to artificially lower the price of C&T to give him a bigger stake in the merged entity — a key part of the Samsung structure — consolidating his grip on the conglomerate.

Last week, the Samsung group rejected media reports of price manipulation as “groundless”, saying in a statement Lee did not take part in “any illegal acts”.

The prosecutors’ request came weeks after Lee issued a wide-ranging apology for company misconduct and promised to end the line of family succession.

Lee, 51, has effectively been at the helm of Samsung — South Korea’s biggest business group — since his father and Samsung group boss Lee Kun-hee suffered a heart attack in 2014.

He was jailed for five years in 2017 in connection with Park’s corruption scandal, but was released a year later on appeal before the country’s top court ordered him to face a new trial.

Samsung’s overall turnover is equivalent to a fifth of the national gross domestic product, making it crucial to South Korea’s economic health.

The company reported a slight fall in first-quarter net profit at 4.88 trillion won ($4 billion), citing the impact of the coronavirus pandemic.

But Samsung — which saw operations suspended at 11 overseas assembly lines — has warned of further falls to come as consumer demand is “significantly” hit by the disease.