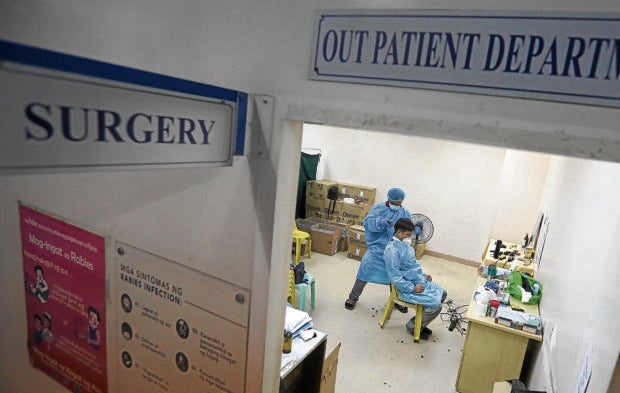 BARBER’S CUT | A doctor at Santa Ana Hospital in Manila gets a free haircut from a visiting barber. (Photo by MARIANNE BERMUDEZ / Philippine Daily Inquirer)

MANILA, Philippines — While it claims that new coronavirus cases are declining, Malacañang cannot say whether quarantine restrictions in Metro Manila will be further loosened after June 15.

The reason, according to presidential spokesperson Harry Roque, is that the coronavirus data for Metro Manila is different compared with those for other regions, which may be placed under different quarantine levels by next week.

Metro Manila remains the epicenter of the coronavirus epidemic in the Philippines so easing the restrictions needs closer study, Roque told a news briefing on Monday.

“It’s an even chance, I would say. But we have to study the data because the [epicenter of the outbreak] is here,” he said.

Roque said new infections were decreasing if reported based on the date of the onset of symptoms.

“I think the doubling time is also becoming longer,” he said.

The system of reporting based on the date of the onset of symptoms is “more accurate” despite backlogs, he said, and will not reflect sudden spikes in cases.

Roque said deaths from COVID-19, the severe respiratory ailment caused by the coronavirus, had gone down to single-digit numbers in recent days.

“Although the total of fatalities has reached the 1,000 mark, the deaths are continuously decreasing. In the [past few] days, it is a single-digit recording of [fatalities],” he said.

On Monday, the Department of Health (DOH) reported 579 new coronavirus cases, bringing the national tally to 22,474.

Of the new cases, 331 are patients who tested positive within the last three days. Central Visayas accounted for the largest number of these cases, 156, followed by Metro Manila, 114.

Of the new infections, 248 were late cases or patients who tested positive at least four days earlier. Metro Manila recorded the highest number of these cases—106.

The DOH reported that 107 patients had recovered, raising the number of COVID-19 survivors to 4,637. The death toll, however, climbed to 1,011, with the deaths of eight more patients.

While all of the accredited laboratories have already submitted their complete line list, or the roster of all those who tested positive since they began testing, the DOH is still reporting late cases because some of the laboratories are unable to submit their daily line list on time.

Health Undersecretary Maria Rosario Vergeire said on Monday that the DOH was helping the laboratories update their submissions by making available to them an automated system of reporting.

The government loosened quarantine restrictions in Metro Manila and some other parts of the country on June 1 to allow more movement and business reopenings to begin a phased revival of the economy that was devastated by lockdowns.

Roque said another reassessment was expected to be released by June 15.

This early, however, he said any easing of quarantine restrictions in any part of the country would not be a reason for Filipinos to be complacent.

He reminded the public to continue observing basic health measures such as wearing protective masks and observing physical distancing.

Roque acknowledged areas for improvement in the current quarantine level in Metro Manila, such as the lack of public transportation, but he reiterated his call to employers to allow staggered hours and remote working in the meantime.

Read Next
Lotto ticket price cut amid pandemic
EDITORS' PICK
Climate advocates among first to cheer new US president
CHEd steps into UP-DND row over ‘problematic’ accord, to broker talks
Lacson advises vaccine czar to ‘watch his back’
Acer Philippines welcomes you to its first flagship store
New Year, New Rediscoveries
Is your company a growth champion? Stand up and be recognized!
MOST READ
Biden admin’s immigration policies to benefit Filipinos — Amb. Romualdez
PET questions Calida interest in private case
Lacson advises vaccine czar to ‘watch his back’
Age restriction relaxed in MGCQ areas: From 15-65 to 10-65
Don't miss out on the latest news and information.