‘Cebu 8’ in protest vs Anti-Terrorism Bill released from jail 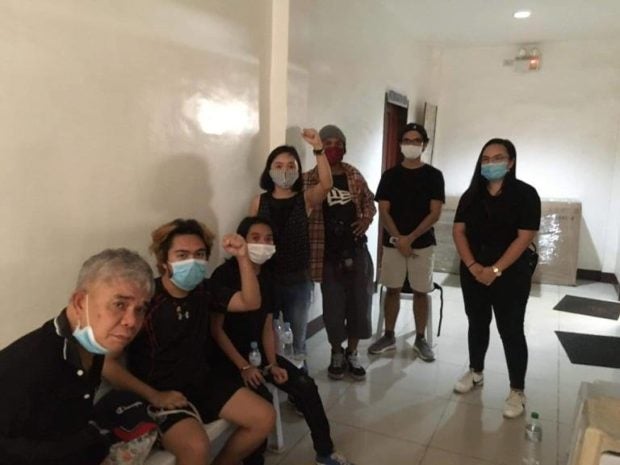 Seven protesters and a teenager who claimed to have been bystander were brought to the Cebu City Police Office after they were arrested for allegedly violating the government ban on mass gatherings at the University of the Philippines Cebu on Friday, June 5, 2020. (Photo courtesy of Bayan Central Visayas)

CEBU CITY, Cebu, Philippines – Seven protesters and a 19-year-old bystander were released past 6 p.m. on Monday, June 8, three days after they were arrested for holding a rally against the Anti-Terrorism Bill outside the University of the Philippines Cebu campus last June 5.

Wearing face masks, they stood half a meter apart from each other outside the Waterfront Police Station as they raised their clenched fist as a sign of solidarity.

Jaime Paglinawan of the Alyansa sa mga Mamumuo sa Sugbo-Kilusang Mayo Uno and Bagong Alyansang Makabayan-Central Visayas said they would continue to keep watch against government abuses and other policies that would be detrimental to the public.

“Our recent experience of getting arrested and jailed will not cow us. In fact, it has strengthened our conviction to stand up for what is right,” he told reporters.

“As the most senior among the arrested protesters, I have given them inspiration to keep fighting. We will not be discouraged by what happened,” said the 60-year-old activist.

Apart from Paglinawan, also arrested were UP Cebu students Joahanna Veloso, 22; Bernie Cañedo, 21, and Nar Athena Mae Porlas; April Dyan Gumanao, a volunteer of the Kabataan party-list; Al Ingking, 26, a UP alumnus; Janry Ubal, 29, of Food Not Bombs Cebu; and 19-year-old Clement Corominas Jr. who claimed to just have passed by UP Cebu when the violent dispersal happened.

Executive Judge Jenelyn Forrosuelo of the Municipal Trial Court in Cities Branch 4 in Cebu City ordered the release of the group collectively known as “Cebu 8” shortly after the Cebu City Prosecutor’s Office elevated the charges to the court.

The judge deemed it proper not to require the eight accused to pay any bail bond since the cases against them were covered by the rule on summary procedure.

Instead, Forrosuelo ordered the accused to submit their counter-affidavits and the testimonies of their witnesses within 10 days from receipt of the order in answer to the accusations of the police.

The Cebu City police filed complaints against the accused for violating the Public Assembly Act of 1985 (Batas Pambansa No. 880), the Law on Reporting of Communicable Diseases (Republic Act No. 11332), resistance and disobedience to persons in authority under the Revised Penal Code.

The Cebu 8 were accused of violating the government’s ban on mass gatherings when they held a protest against the controversial Anti-Terrorism Bill in front of entrance gate of UP Cebu.