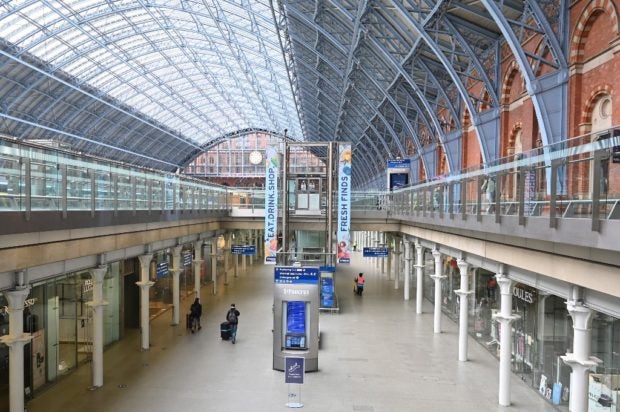 A passenger walks through an almost empty St Pancras train station in central London, on June 8, 2020, as the UK government’s planned 14-day quarantine for international arrivals to limit the spread of the novel coronavirus begins. Photo by JUSTIN TALLIS / AFP

LONDON — Britain introduced a two-week quarantine on Monday for most people arriving from abroad to try to limit the spread of the coronavirus, sparking condemnation from the ailing aviation sector, which claims it could cost tens of thousands of jobs.

Critics question why Britain, which has been hardest hit by COVID-19 in Europe and is only gradually easing a lockdown, is inflicting more pain on hotels and airlines by reducing travel from countries with fewer virus cases.

British Airways and budget carriers EasyJet and Ryanair have launched joint legal proceedings against the government over what they called a “disproportionate and unfair” step.

Ryanair boss Michael O’Leary told Sky News television on Monday the plan was “useless” and unenforceable, and said it would “devastate thousands of jobs in British tourism”.

The chief executive of London’s Heathrow, John Holland-Kaye, told the City AM newspaper it could lead to the loss of potentially 25,000 jobs at his airport — a third of staff.

But Health Secretary Matt Hancock said the new rules made sense because “the proportion of infections that come from abroad increases” as Britain’s own caseload drops.

“We’ve got to take an approach that starts with caution,” he told Sky News.

To enter Britain by plane, train, road or sea, travelers must provide details of their journey and the address where they will self-isolate.

How the quarantine will be implemented differs between Britain’s devolved nations, and the measures will be assessed every three weeks.

Exemptions are being made in several cases — including for lorry drivers, “essential” healthcare workers and people traveling from Ireland who have been there for at least two weeks.

At London’s Heathrow Airport, where only two of the five terminals are operating due to reduced travel, the quarantine got a mixed reception.

“It’s a good idea,” said Sandy Banks, 45, returning to Britain with her three children from Jamaica via the United States. “Other countries are doing it.”

But a 52-year-old Dutch lawyer living in London, who wished to remain anonymous, called it a “political thing”.

“I just think it’s a bonkers idea. More people are ill and dying in the UK; probably Europe should be protected from us.”

Britain’s official death toll is 40,542 — second only to the United States.

Home Secretary Priti Patel told skeptical lawmakers in parliament last week the measure was “backed by the science, supported by the public, and essential to save lives”.

“Weeks ago other countries put quarantine in and we didn’t, now as everybody’s lifting it we are putting it in,” he told LBC radio, adding he would prefer testing within airports.

As part of the gradual easing of lockdown restrictions, non-essential retail outlets will reopen from June 15. Restaurants and bars will follow with a limited service in early July.

But the devastated hospitality sector relies heavily on tourists, and business leaders fear the quarantine will mean much of the summer season will be lost.

It comes after heavily-hit Italy reopened its borders last week and other European states follow suit.

Prime Minister Boris Johnson’s government is trying to arrange “travel corridors” with countries such as France and Spain that could see them lift their quarantine demands.

But officials are reportedly giving themselves until late June to strike these deals — and the airlines behind the lawsuit say they cannot wait that long.

“These measures are disproportionate and unfair on British citizens as well as international visitors arriving in the UK,” the airlines said in a joint statement.

The quarantine “will have a devastating effect on (the) UK’s tourism industry and will destroy thousands of jobs in this unprecedented crisis,” they said.

Read Next
Families of 6 felled health frontliners have yet to receive P1M compensation
EDITORS' PICK
Water remains our saving grace right now
BREAKING: 3,226 latest COVID-19 cases bring PH’s total to 106,330
Smart 5G goes live
A gem of a residence in the new normal
PNP: Checkpoints back in MECQ areas
Been there, done that but what’s the difference between MECQ and GCQ?
MOST READ
MECQ guidelines in infographics
You’re my ‘idol’ in crafting laws, neophyte senator ‘Bato’ tells Drilon
Citing Duterte order, Lorenzana says PH won’t join other navies in South China Sea drills
Ces Drilon after the ABS-CBN shutdown
Don't miss out on the latest news and information.