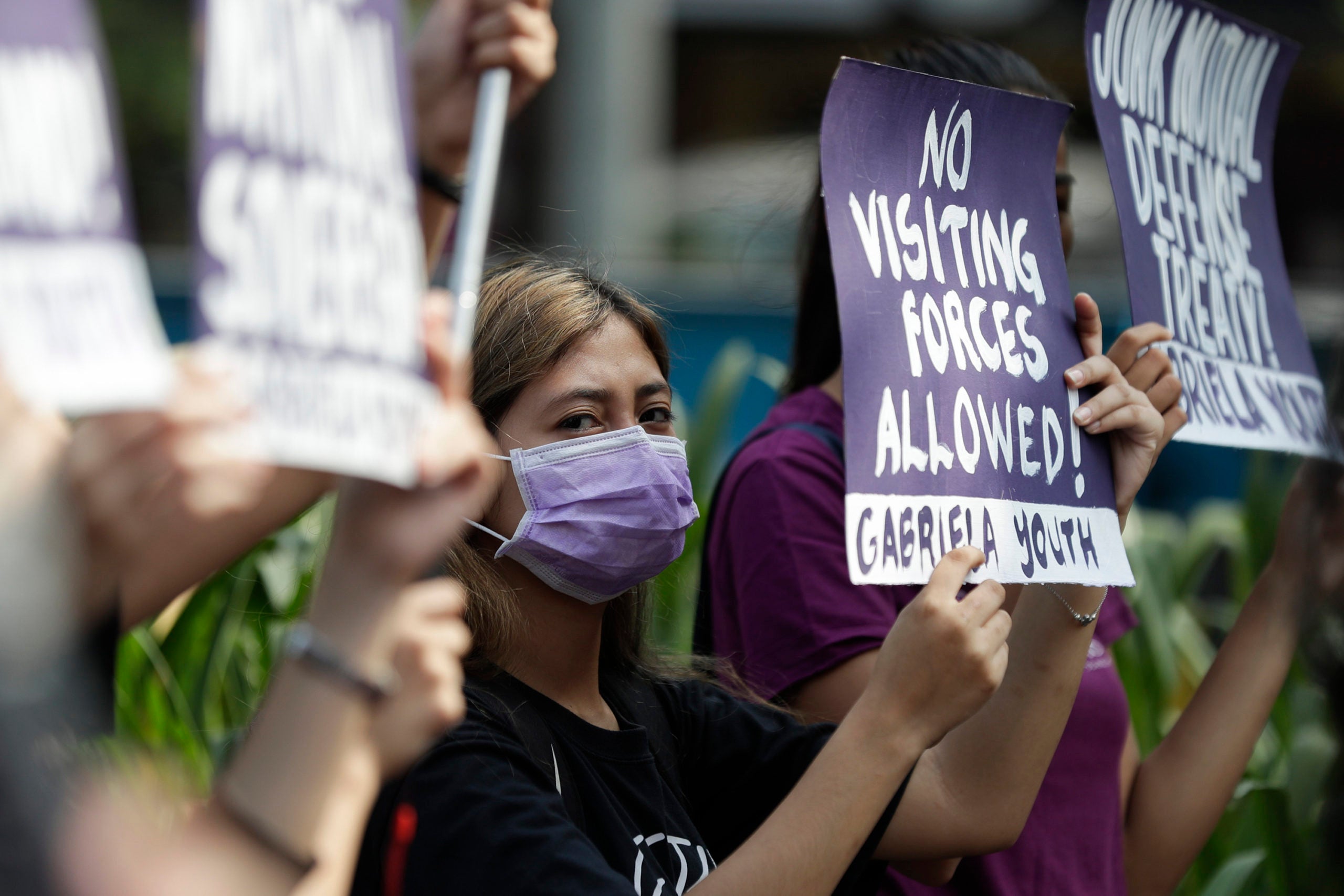 In this March 6, 2020, file photo, a woman protester wearing a protective mask holds a slogan during a rally outside the U.S. Embassy in Manila, Philippines against the planned military exercises between the Philippines and US under the Visiting Forces Agreement. The Philippines has decided not to suspend a defense pact with the U.S., avoiding a major blow to one of America’s oldest alliances in Asia.(AP Photo/Aaron Favila, File)

BEIJING — A look at recent developments in the South China Sea, where China is pitted against smaller neighbors in multiple territorial disputes over islands, coral reefs and lagoons. The waters are a major shipping route for global commerce and are rich in fish and possible oil and gas reserves.

The Philippines has decided not to suspend a defense pact with the U.S., avoiding a major blow to one of America’s oldest alliances in Asia.

Foreign Secretary Teodoro Locsin Jr. said Tuesday that the Philippines is delaying its decision to abrogate the Visiting Forces Agreement by at least six months.

The alliance is seen as having deterred aggressive Chinese actions in the disputed South China Sea, including possible construction of structures in Scarborough Shoal, a disputed fishing area off the northwestern Philippines that China effectively seized after a tense standoff in 2012.

Cambodia says base open to all

Cambodia’s leader says China has not been given exclusive rights to use a naval base on the country’s southern coast, and that warships from all nations, including the United States, are welcome to dock there.

Prime Minister Hun Sen last week repeated denials that the Ream naval base on the Gulf of Thailand had been handed over to close ally and financial benefactor China for 30 years. Such a move would allow the Chinese navy to post military personnel, store weapons and berth warships.

Many analysts believe basing rights in Cambodia would extend Beijing’s strategic military profile considerably and tilt the regional balance of power in a manner that would pressure adjacent countries in the Association of Southeast Asian Nations whose security concerns traditionally have been aligned more closely with the United States.

The U.S. permanent representative to the United Nations has fired back at Chinese territorial claims in the South China Sea.

Ambassador Kelly Craft’s note weighs in on Malaysia’s behalf in its bid to reject China-imposed limits on its continental shelf allowing it rights to resources.

“The United States rejects these maritime claims as inconsistent with international law as reflected in the 1982 Law of the Sea Convention,” Craft’s note said.

China in December issued a rejection of Malaysia’s petition to extend its continental shelf. Beijing ignored a 2016 ruling by the Permanent Court of Arbitration in the Hague that invalidated most of China’s claims to virtually the entire South China Sea.

The U.S. does not officially take a stand on sovereignty issues in the area, but maintains its military has the right to fly, sail and operate in all areas open to international navigation.

India and Australia are strengthening defense ties and cooperation on Indo-Pacific maritime issues, at a time when both countries are facing increased tensions with China.

Indian Prime Minister Narendra Modi and his Australian counterpart, Scott Morrison, on Thursday agreed to give each other access to their military bases.

India accuses China of starting the latest standoff along their undefined border in the Himalayas.

China and Australia are at loggerheads over trade, China’s territorial ambitions in the South China Sea, and most recently, Australia’s push for an international investigation into the origins of the coronavirus pandemic and China’s response to it.