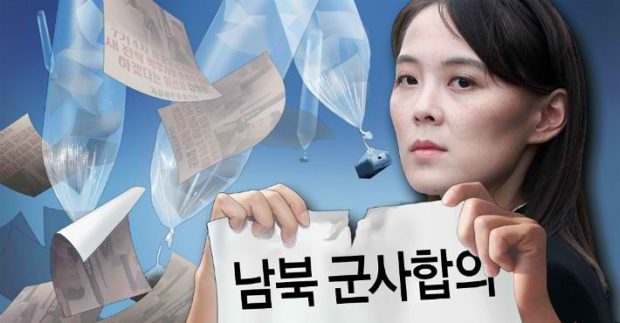 SEOUL — North Korea did not answer a daily liaison phone call from South Korea on Monday for the first time since the opening of a joint liaison office in 2018, the unification ministry said, after Pyongyang vowed to abolish the office in anger over anti-Pyongyang leaflets from the South.

The lack of response deepened concerns that the North might be carrying out its threat to scrap the liaison office in protest of propaganda leaflets that defectors and other activists in the South fly across the border criticizing Pyongyang’s leadership.

“This morning the liaison office attempted to call North Korea, but the North has not answered the call yet,” the ministry’s spokesperson Yoh Sang-key said at a regular press briefing. “This is the first time North Korea has not answered our calls.”

“We will attempt to call again this afternoon as planned,” he added.

Through the inter-Korean liaison office, the two Koreas have made two phone calls daily, at 9 a.m. and 5 p.m., since its opening in September 2018 following a historic Panmunjom summit between North Korean leader Kim Jong-un and President Moon Jae-in.

She denounced the leaflet campaign as a hostile act that violates the peace agreements banning hostilities against each other signed during the summit talks of their leaders in 2018.

She also warned that the North will scrap an inter-Korean military tension-reduction agreement calling for a halt to all hostilities along the border and completely dismantle a now-shuttered joint industrial park in the North’s border city of Kaesong.

North Korean defectors and anti-Pyongyang activists have occasionally sent balloons carrying leaflets sharply criticizing the communist regime and its leader, despite repeated calls for a halt to the campaign.

The balloons are often flown with one-dollar bills and USB memory sticks to get more North Koreans to pick up the leaflets.

Meanwhile, defense ministry officials said that military communication lines between South and North Korea were operating normally, with both sides speaking to each other via a series of hotlines Monday morning. Yonhap

Read Next
Cops could be charged if they violate social media protocols — Gamboa
EDITORS' PICK
SMDC’s Bloom Residences: A master planned community that cares for your health and wellness
COVID-19 cases in PH pass 3.2 million mark with 37,154 new cases — DOH
Over 3 Million worth of prizes to be won at Smart Padala’s SENDali Manalo Promo!
Upsilon, Unilever give ‘real talk’ on climate change crisis
What to expect as Metro Manila starts ‘no vaccination, no ride’ policy on Monday
Metro Manila’s daily COVID-19 growth rate drops to 2% — Octa Research
MOST READ
Thailand records first Omicron death
‘Not my loss’: Did Kris Aquino just comment on her breakup with Mel Sarmiento?
Prince Harry sues for UK police protection
Ivana Alawi tests positive for COVID-19, urges public to comply with health protocols: ‘No one’s above the law’
Don't miss out on the latest news and information.