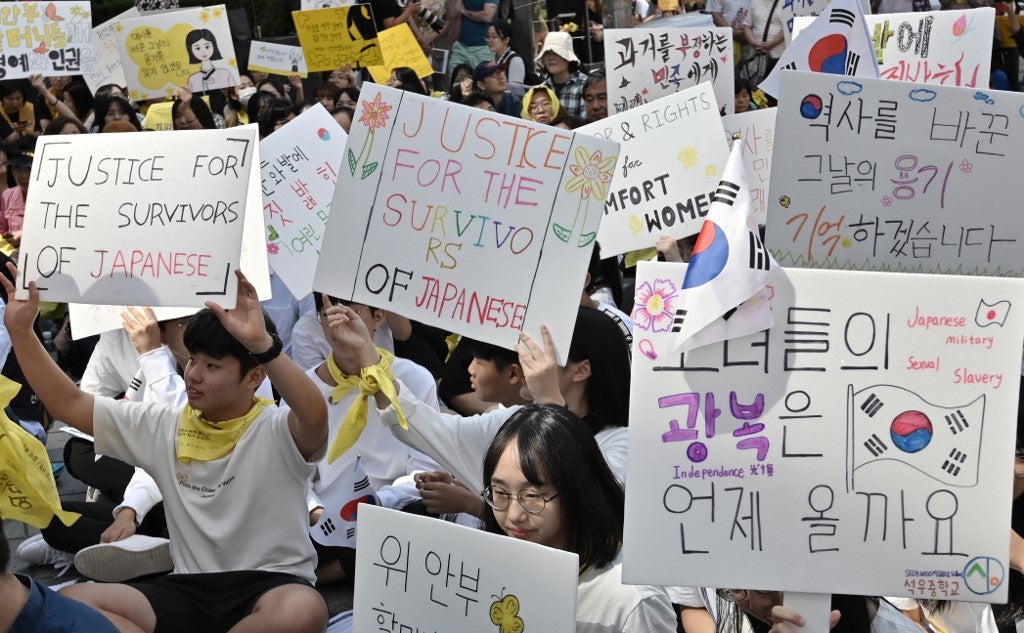 Supporters of former “comfort women”, who were forced to serve as sex slaves for Japanese troops during World War II, hold placards during a demonstration demanding the Japanese government’s formal apology near the Japanese embassy in Seoul on September 18, 2019. (Photo by Jung Yeon-je / AFP)

SEOUL, South Korea — A woman running a shelter for South Korean victims of Japan’s wartime sexual slavery has been found dead in her home, police said Sunday, amid a widening probe into a corruption scandal involving its owners.

Prosecutors are investigating allegations that activist group the Korean Council for Justice and Remembrance misused funds meant for the so-called “comfort women” — a euphemism for Japan’s former war-era sex slaves.

The 60-year-old woman was believed to have taken her own life, police said.

“She came home by herself and the door was locked,” police told AFP without giving the woman’s name.

Officers said they did not believe anyone else was involved in her death.

The reason for her death was not known, but South Korea’s Yonhap news agency reported she previously said she was going through a hard time after prosecutors raided the shelter.

The plight of comfort women has been a thorny issue between Seoul and Tokyo for decades and the activist group had campaigned for compensation from Japan.

But last month, Lee Yong-soo, one prominent victim, accused the group and its former leader of exploiting comfort women to collect government funds and public donations.

Lee said little money had been spent on their cause, prompting prosecutors to open a probe.

The investigation includes allegations that the former leader, Yoon Mee-hyang, embezzled funds to buy apartments and to pay for her daughter’s tuition in the United States.

Yoon — who left the group after winning a parliamentary seat in April — has denied all the allegations but apologised for “banking errors”.