MANILA, Philippines — The Anti-Terrorism Bill could be on President Rodrigo Duterte’s desk as early as Tuesday, according to Senate President Vicente Sotto III, but opposition lawmakers urged congressional leaders to delay transmission of the bill to Malacañang to give representatives and senators time to reconsider their votes.

In a radio interview on Saturday, Sotto said he expected to sign the enrolled bill on the proposed Anti-Terrorism Act of 2020 on Monday and it would be sent to the President the next day.

A majority of the administration-dominated House of Representatives voted to pass the bill on Wednesday. The House had adopted the Senate bill, which was approved in February with a 19-2 vote.

Presidential spokesperson Harry Roque on Thursday said certifying the antiterror bill as urgent did not mean Mr. Duterte would “automatically” sign it into law as it would still undergo a “thorough review.”

Sotto noted that there was so much “disinformation” about the measure but was confident it could withstand any legal challenge.

Bringing a case to the Supreme Court would be “the best thing” that opponents of the proposed law could do “so that they can be proven wrong and they would know that everything in the bill is correct,” he said on dwIZ radio. 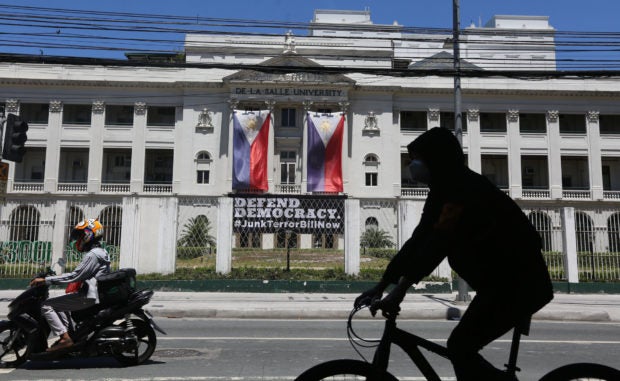 JOINING FORCES The presidents of the various campuses of the De La Salle University and Ateneo de Manila University issued a joint statement strongly opposing the proposed antiterrorism law, saying it is ill-timed amid the COVID-19 pandemic and will “impair sacred constitutional rights.” (Photo by MARIANNE BERMUDEZ / Philippine Daily Inquirer)

The Senate had consulted justices and ex-justices of the Supreme Court in crafting the bill, he said to assure Filipinos it was legally firm.

Sotto also disputed allegations that the bill would be used against critics of Mr. Duterte or the administration.

He said critics “can curse at the President morning, noon or night or do the same to us, they won’t be arrested as terrorists.”

To assure the public that the bill faced careful scrutiny before it was approved, Sen. Panfilo Lacson, its main sponsor, said that members of the Senate minority had introduced amendments to measure.

He said even Senate Minority Leader Franklin Drilon, a former justice secretary, voted in favor of the bill because he saw its necessity.

Only opposition Senators Risa Hontiveros and Francis Pangilinan voted against the bill.

“The primary aim of the Anti-Terrorism Act of 2020 is to secure the state and protect the people, not to protect the terrorists,” Lacson said.

“This would protect the peace-loving Filipinos against the terrorists,” he added.

Lacson said he understood apprehensions regarding the bill because of the excesses in the war on drugs and the killing of former Army soldier Winston Ragos for allegedly violating the quarantine rules.

But he said the proposed antiterrorism law had “all the safeguards.”

For instance, the judicial authorization for wiretapping has to be obtained from the Court of Appeals (CA) instead of the regional trial court, Lacson said.

The information obtained would have to be reported to the CA, which would decide what could be released, he added.

“If there are abuses, the remedy we introduced is to increase the penalty,” Lacson said.

Several proadministration lawmakers withdrew support for the bill, either by voting against it or abstaining, including the main author of the original House version of the measure, Rep. Ruffy Biazon, who voted “no.”

Albay Rep. Edcel Lagman asked Speaker Alan Peter Cayetano to defer transmittal of the bill to the President to allow members of the House and the Senate to “cleanse it of constitutional infirmities.”

“My call for (Cayetano) not to sign with alacrity the enrolled bill on the ‘Anti-Terrorism Act of 2020’ is further justified by the withdrawal of some representatives of their affirmative votes as well as the clarification of their conditional ‘yes’ votes,” Lagman said in a statement.

Biazon was dismayed by the refusal of the committee on public order and safety to accept amendments during floor deliberations.

“So the only remedy will be to file an amendment [after it is signed into law]. Realistically, it would be difficult to pass, though,” he said in a text message.

House Deputy Minority Leader and Bayan Muna Rep. Carlos Isagani Zarate called on his colleagues who voted “yes” to the bill to come out in the open and withdraw their votes.

“We should not allow our country to become a police state with a junta-like formation lording it over. Human rights and civil liberties may become a thing of the past if this bill is enacted,” he said.

Salceda had written House Secretary-General Jose Luis Montales to change his vote, which was recorded as “yes with reservations,” to “abstain.”

Baronda and Aragones did not immediately respond to the Inquirer’s request for comment. Gorriceta could not be reached by phone.

“We hope that more still will withdraw and change their ‘yes’ votes by writing the secretary-general and the Speaker to register their change of heart,” Zarate said.

In his letter to Montales, Salceda said he had “reservations” on a number of provisions in the proposed law.

He said some definitions in the measure must be tightened to ensure the protection of the rights of the people, and some provisions that were inconsistent with human rights and the 1987 Constitution must also be amended.

According to Salceda, the definition in the bill of what constitutes a “threat,” “preparing” and “recruitment to and membership in a terrorist organization” are vague and prone to varying interpretations.

Another provision also expands the list of targets for surveillance or wiretapping by including persons who are merely “suspected” of committing any of the crimes penalized under the proposed law, Salceda said.

He said the Anti-Terrorism Council (ATC) composed of Cabinet officials would be performing court functions in ordering the arrest of suspected terrorists, which was “inconsistent with the principle of separation of powers and would be a violation of the constitutional powers of the judiciary.”

Another provision—detaining suspects for 14 days, extendible for another 10 days—also violates the Constitution, which sets a three-day limit to detention without charges of anyone arrested even when the privilege of the writ of habeas corpus is suspended, Salceda added.

“This representation hopes that the pertinent provisions can be refined. While police power is vested in the state, this needs to be implemented within the context of the social contract, where the people reign supreme,” he said.

—With a report from Mar S. Arguelles