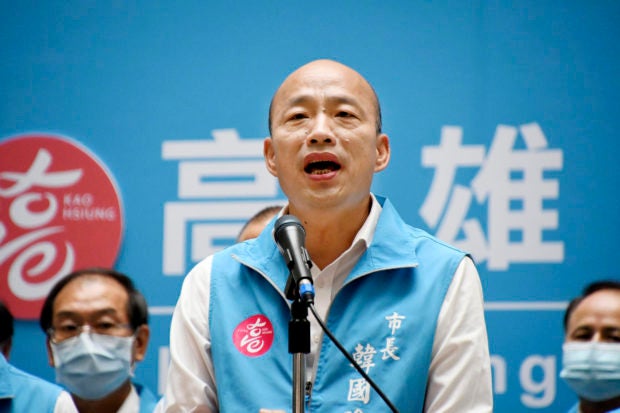 Mayor Han Kuo-yu speaks to the media in Kaohsiung, Taiwan, Saturday, June 6, 2020. Residents of the Taiwanese port city of Kaohsiung voted Saturday to oust their mayor, whose failed bid for the presidency on behalf of the China-friendly Nationalist Party earlier this year brought widespread disapproval among residents. (Kyodo News via AP)

TAIPEI — Voters in the Taiwanese port city of Kaohsiung on Saturday ousted their mayor, whose failed bid for the presidency on behalf of the China-friendly Nationalist Party earlier this year brought widespread disapproval among residents.

The number of votes to recall Han Kuo-yu far exceeded the 574,996 needed to remove him. Han accepted the result in a statement to supporters and media after the threshold was passed.

But he blamed the media in part for the result, saying he had been subjected to “constant smears, rumors and attacks.” He has one week to leave the office unless he decides to appeal.

The success of the recall vote — Taiwan’s first — was hailed by commentators as the latest sign of politicians being held accountable in the island’s robust democracy. It is also a further blow to the Nationalists, who moved their government to the island after Mao Zedong’s Communists swept to power in mainland China in 1949.

The party’s continued association with China’s demand for eventual unification between the sides has continuously hurt it at the polls, but a failure to generate popular candidates has also resulted in recent major defeats.

The measure to remove Han needed the support of 25% of the city’s more than 2 million eligible voters. Just over 22,000 voted to oppose his recall.

Han won a surprise victory in 2018 in what had long been a stronghold of the ruling Democratic Progressive Party, which rejects China’s demand that it recognizes Taiwan as a part of China.

His decision to take a leave of absence to seek the presidency just months after taking office drew heavy criticism and a petition campaign was launched to seek his recall.

Han was blasted for his contacts with China’s ruling Communist Party and lost in January’s presidential election to DPP incumbent Tsai Ing-wen by a whopping 57% to 38%, with a third-party candidate taking the remaining percentage.

Strong Taiwanese disapproval of the heavy crackdown on pro-democracy protesters in the semi-autonomous Chinese territory of Hong Kong and questions about how Han had acquired expensive properties on his modest civil servant’s salary also helped Tsai to the landslide win.

China has shunned Tsai since shortly after her 2016 inauguration, shutting the already diplomatically isolated island out of international forums and stepping up its threat to conquer the island by military force. She has, however, received strong support from the Trump administration amid sharply deteriorating relations between Beijing and Washington.