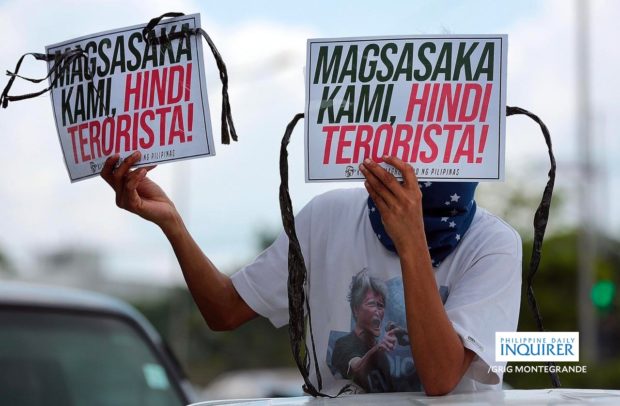 In this June 3, 2020, photo, a protester holds anti-terrorism bill placards as groups stage a protest and noise barrage outside the House of Representatives in Quezon City to demand the scrapping of the anti-terrorism bill that lawmakers approved in its 2nd reading on Tuesday, June 2, 2020. INQUIRER/GRIG C. MONTEGRANDE

TAGBILARAN CITY — A peasant group urged the three district representatives in the province of Bohol to withdraw their support to the anti-terrorism bill.

“A number of congressmen have already withdrawn their votes for House Bill 6875. When will these three (Bohol) congressmen who supported the bill withdrew their votes?” asked the Hugpong sa Mag-uumang Bol-anon-Kilusang Magbubukid ng Pilipinas (Humabol-KMP) in a statement.

Among those who voted in favor of the controversial bill, the group said, were Representatives Edgar Chatto of Bohol’s 1st district, Erico Aristotle Aumentado of the 2nd district, and Kristine Alexie Besas-Tutor of the 3rd district.

Humabol expressed concerns over some provisions of the proposed law that may lead to human rights abuses.

Humabol said that even without the bill, some of their members and other progressive groups in Bohol have already been targeted by law enforcement units.

The group also claimed they were accused by the military as a front of the Communist Party of the Philippines-New People’s Army which has been labeled a terrorist group by the government.

Two of the three Bohol legislators said they supported the anti-terrorism bill to avoid a repeat of the 2017 incident when 11 members of the Abu Sayyaf Group slipped into Bohol.

The clash between the bandit group and the military lasted for more than a month, prompting several countries to issue travel warnings in Central Visayas.

In a statement, Aumentado said he voted for the anti-terrorism bill “to avoid bloody encounters between government forces and those creating havoc in our communities and those wanting to bring down our government.”

“The anti-terrorism allows pre-emptive strike among these elements without having to undergo the long and tedious legal process.”

“I strongly condemn confrontational approaches in the solution of peace and order issues. I prefer a pre-emptive action in order to avoid violence that may affect innocent civilians,” he added.

For her part, Tutor said the Abu Sayaff encounter in 2017 was an “eye-opener” of what terrorism can do.

“I do not want such incident to occur again in our beloved province. Terrorism is like a bomb waiting to explode. Its brutality knows no bounds,” she said in a statement.

Tutor said lawmakers cannot remain lenient even in the midst of a pandemic.

“Just because we are in a crisis does not mean that terrorists will not strike. When they do, God forbid, what then shall we do?” she said.

Tutor explained that the clear intent of the bill is to suppress, prevent, and punish acts of terrorism.

“This serves as the backbone and teeth to support the criminal justice response against terrorism. In comparison with the Human Security Act, this Bill has a more comprehensive approach in addressing the threats and acts of terrorism,” she said.

The apprehensions of some groups and individuals, she added, were due to “misinterpretation, misinformation and misconception” about some provisions, including the 14-day detention of suspected terrorists and the possibility that it can be used to go after critics of the administration.

“The purpose of the detention is to preserve evidence, complete the investigation and prevent the commission of another terror act, thereby building an air-tight case,” Tutor said.

“Critics can freely express themselves. There is no curtailment to such right. The most important thing is that in every enforcement and implementation of the law, the state upholds the basic rights and fundamental liberties of the people as enshrined in the Constitution. After all, respect for human rights remains absolute and protected at all times, ” she added.

Chatto, meanwhile, has yet to issue a statement.