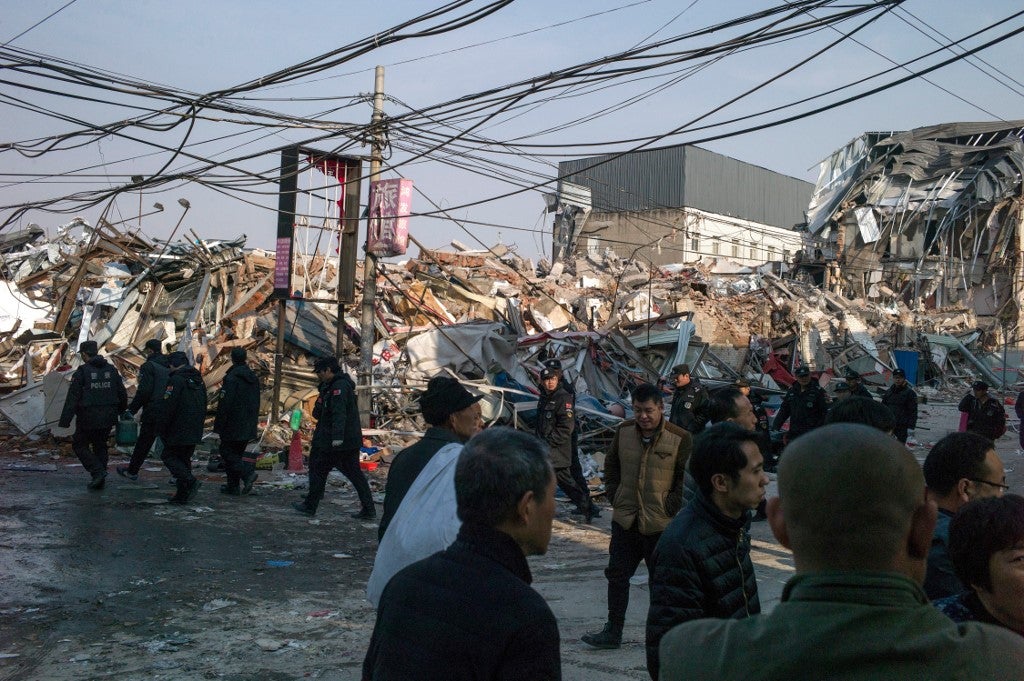 (FILES) This file photo taken on November 27, 2017 shows security guards walking amongst the wreckage of buildings that had been demolished by the municipality on the outskirts of Beijing. In China, land can only be owned by the state or collective organizations. Private individuals or businesses can only buy the right to use land for up to 70 years. (Photo by Fred DUFOUR / AFP)

Farmers in China have faced forced evictions and illicit land grabs for decades — sources of social unrest that the government is finally trying to address in a major shake-up of its property law.

Millions of hectares of rural land were taken away from farmers in the past three decades and given to developers as China raced to urbanize, often with little or no compensation in return.

“Land disputes trigger half of an estimated 100,000 social protests in China every year, making them the second leading cause for public unrest after labor disputes,” Ni Yulan, a lawyer who advocates for property rights of low-income families in Beijing, told AFP.

Ni has been jailed twice for her advocacy and is paralyzed from the waist down, a result she says of beatings received during her detention.

Her house in Beijing was demolished by officials in 2008, but she hasn’t yet been able to file a complaint about it because local courts were operating hand in glove with the local government, her husband Dong Jiqin said.

China’s first-ever civil code approved by parliament last week focuses on giving judges greater independence and curbing the influence of local officials, but the judiciary is still ultimately answerable to the Communist Party.

The new guidelines have narrowed the interpretation of “public interest” to prevent abusive land grabs.

It also makes it mandatory for local governments to make public announcements on “all acts taken by the state in relation to private property”, thus making land transactions more transparent.

But it does not stipulate any punishments for those illegally expropriating land or the rights of individual farmers to collective land, making it harder for families to seek compensation.

The wide-ranging legislative package will come into effect on January 1.

“For the first time, the civil code offers one whole (legal) system,” Liu Qiao, who specializes in Chinese and English civil law at the City University of Hong Kong, said.

“It forces courts and judges to be consistent with their interpretations, thus reducing room for political meddling.”

But Dong, who is also an activist, was concerned that the new provisions will be ignored during enforcement.

“The problem in China is that there is no supervision, and the judiciary doesn’t act in accordance with the law,” he said.

Local governments have taken away land from 100,000 to 500,000 farmers every year between 2005 to 2015 in violation of national land-use laws, according to a study by Qiao Shitong, a property and urban law professor at the University of Hong Kong.

In China, land can only be owned by the state or collective organizations. Private individuals or businesses can only buy the right to use land for up to 70 years.

The civil code -– for the first time -– clarifies what will happen once a home owner’s 70-year usage rights expire.

The law affirms that land-use rights for residential homes will be automatically renewed after expiration but does not say whether owners need to pay for renewals.

“This is a strong boost of confidence to the country’s homebuyers who were in the dark about what would happen… once the so-called usage-period expires,” said Dong Jizhou, a real estate analyst for Huatai Financial Holdings.

Ruo Lan, a dumpling vendor in Beijing, said she was earlier nervous about pouring her life savings into buying an apartment for her son.

“I can’t afford a new apartment, and I was worried about buying one built 30 or 40 years ago because it wasn’t clear whether we could still live in it after the 70-year property use period expired,” Ruo said.

“Now I’m at peace knowing my grandchild can inherit the property.”

Tenants enjoy very few rights under a patchwork of contradictory laws in China.

Han Bingxing, who rents a luxury apartment in Beijing, found her water cut off in March after being just two weeks late on rent.

“I was laid off in February, and I had asked for some time from the landlord to settle the bills,” the 26-year old copywriter told AFP.

“But this was an ominous sign she wanted to evict me.”

Cutting off utilities — or even sending thugs — is a common practice when landlords want to get rid of tenants in China.

Liu said the civil code bars property service companies from cutting off water or electricity of tenants who are in arrears.

The government hopes the move will bolster China’s 1-trillion-yuan ($145 billion) rental market that has been battered by the coronavirus outbreak.